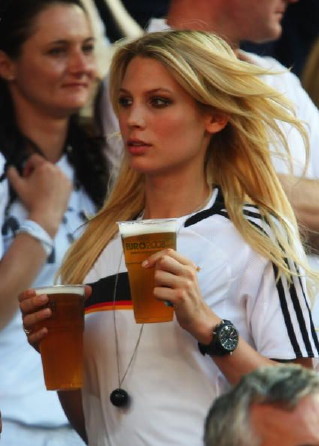 Following on the heels of our look at German midfielder Bastian Schweinsteiger, we present you his “discovered on the street” model girlfriend Sarah Brander.

Schweini has been in excellent form since the 5’10” blond came along (ending his streak of 5 girlfriends in a year and a half), and has actually given her some credit for his current class.

These sorts of things aren’t always in our focus, but the sight of her double-fisting at the 2008 Euro was just enough to push the issue to the top. For more up-to-date happenings on Sarah and  Schweini’s love, and for general swooning over fit footballers, take a peak at kickette. They are sure to appreciate you stopping by.

And now, without further ado, the Sports Illustrated World Cup body painting swimsuit video staring the long german (after the bump). Be warned, the combination of giggling over the opening bars of Deutschland über alles may draw unwanted attention.

In the highly anticipated semifinal game between Germany and Spain, a Euro Cup 2008 championship rematch, a German octopus is the star and Spain’s bench becomes my top priority.

In case you haven’t heard, Paul, a “psychic” octopus from the Sea Life Aquarium in the city of Oberhausen, has correctly called every World Cup game involving the German team thus far.  And before today’s game, Paul predicted Spain would be victorious. Way to go, octopus!  Your country wants to make you dinner, but at least you were right…

Onto more important things.  Spain’s 1-0 victory will put them in the World Cup final against Netherlands on Sunday.  Sooooo, who are we looking at? Carles Puyol? The lone goal scorer of the Germany v Spain game?  I think not.  He’s got game, but he’s not really a looker.  I think we should take a look at the bench. Jesus Navas.  24 year-old forward born November 21, 1985 in Los Palacios y Villafranca, Seville.  Navas joined the Sevilla FC youth system at 15. Heeeey. Currently, he plays for La Liga club Sevilla FC.

Side note: The blue-eyed muffin suffers from chronic homesickness. Sad face.  He has walked out of training camps within Spain because they were too far away from Seville and has quit playing internationally because anxiety from being away from home.  Big cry baby? Sensitive soul? Toss up.

Thank goodness for us, Navas decided to overcome his condition and play for his country because, “To play for your country is the greatest thing and I hope to be able to, too.”  Sigh. I’m moving to Seville. 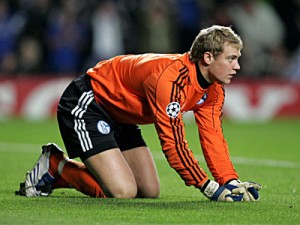 Benny Feilhaber (January 19, 1985): born in Rio de Janeiro but grew up in Scarsdale, NY before moving to CA and attending Northwood High School in Irvine, where he was a “standout midfielder on the school’s soccer team.” After graduating in 2003 he played for UCLA, where he became a mainstay in the Bruins’ midfield.

This video really speaks for itself. BONUS MVH points for being (kinda) from my hometown – Irvine, CA. MAN I wish there were more USA games to watch. Damn it.

Wow! What a painfully boring game. To be fair, there were some great passes and fancy footwork and even a few nice upshort shots, but overall: weva.

I was also sad to see Kaka on the sidelines. He’s always fun to watch and I don’t like seeing him in his ‘street’ clothes. When he’s not in his kit, he looks kinda… girly. Sorry, Kaka, just keeping it real!

Ok so back to the matter at hand: Most Valuable Hottie. UGH – it was kinda hard to pick one, what with CRISTIANO RONALDO hogging screentime for most of the game. (Yes, he’s attractive… But the vanity! Arrogance! Perfectly shaped brows! BARF). But after careful consideration, I’ve decided that this match’s MOST VALUABLE HOTTIE award goes to…

Nilmar Honorato da Silva! Nilmar (born 14 July 1984 in Bandeirantes, Paraná), is a Brazilian forward, currently playing for Villareal. He’s a cutie. Didn’t do much during this match (though he did have 8 ‘won balls’ – and I think that’s good) – but he’s just so cute! And kinda little, which I like. K that’s it for now. Can’t wait for Spain v. Chile… HOLA GUAPOS!

I’ve been recruited by two lovely gentlemen to write this piece because my usual posts on FSM (www.fantasysportsmarket.com …shameless plug) are on hiatus after a heartbreaking Celtics loss in the NBA finals.

I woke up yesterday morning a nervous wreck. A Canadian, who shall remain nameless, taunted me pre the USA v. Slovenia game. Meanie. What happens? We tie. USA v. Algeria this morning. The foreigner better keep his negativity to himself.  Unfortunately, I could not come up with a feasible excuse to skip work to watch the game, so I sucked it up and listened to Spanish radio with my co-worker while sketching on my Wacom tablet.  My Spanish is not that awesome. 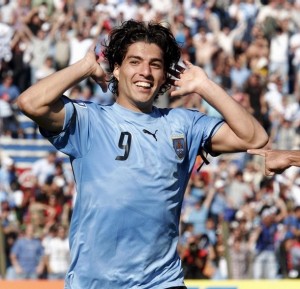 Early MVH predictions: Luis Suarez (Uruguay) the 23-year-old striker who scored goal #1 in this very riveting Uruguay / Mexico match up. He made it look so easy, didn’t he? And that million dollar smile (okay and overbite)! Magnifico!

And on the S. Africa / France side: gotta go with my man Katlego Mphela. He’s a striker for the Mamelodi Sundowns when he’s not playing for his home country South Africa, and he was responsible for that all-too-easy second goal against France at the end of the first half. Go Bafana Bafana!

Chile vs. Switzerland: SNOOZE. Besides that rando-red card, there hasn’t been much to report on in this match-up IMHO… except, of course, this game’s clear pick for Most Valuable Hottie: the young-and-banging Carlos Emilio Carmona Tello, Chile’s 23-year-old midfielder who was the touch-leader of the first half of the game (I think I made that up, but it means he had the most touches of the ball – 43)! Carlos was his country’s youngest player at the 2005 U-20 World Cup in Holland and captained some other teams I think. I can’t find that much about him on the internet, but don’t you just want to drown in those bedroom eyes? La Swoon!