Spain’s biggest defeat in nearly 50 years came at the hands of Iberian neighbor Portugal. The 4-0 thrashing was Spain’s worst loss since Scotland laid down a 6-2 spanking back in 1963  (odd time that, considering the Spanish Miracle was in full swing). In lieu of commentary, we provide a highlight clip, especially helpful for all of us without ESPN Deportes.

The drive into Durban went easily enough, and we arrived at the hotel around lunch.  We walked down to the beachfront and enjoyed the warm weather.  A mile of sandy beaches with swimmers and surfers, sand sculptors, and a wide promenade separate

the FIFA fanfest area in the south and gorgeous Moses Mabhida stadium on the north end.  The casino and its food court are also in the north, hosting the secondary fanfest sponsored by Hyundai.  Hey look its Frings, and we all enjoy bidding,  “Arrivederci , Italia!” though regretting we will not be enjoying a Netherlands v Italy second round match on the 28th.

We decide to utilize the main fanfest for the Brazil v Portugal crunch on the 25th.  After we enjoy our toes in the sand and a lovely walk around the beachfront, FIFA opens the gates two hours before the match.  We sample some local foods, though somehow miss the bunny chow as we opt for more sausages.

The final contest of the Round of 16 kicks off at 2:30pm ET–an intra-Iberian matchup involving powerhouses Portugal and Spain. The winner will get slotted into the remaining quarterfinal match, taking on surprise quarterfinalist Paraguay on Saturday.

We’ll be watching the game from the awesome PlayBeautifulNYC popup virtual stadium in Soho/Nolita. We’re not sure if they have wifi–if so, we’ll be liveblogging from there; if not, we’ll try to post to the comment thread from our phones, but we’ll count on you to provide most of the color commentary!

We are 45 minutes from kickoff. Starting lineups and the ever-present comment box after the jump!

Today’s matches to determine the last quarterfinal pairings see the surprisingly pithy Japan up against a Paraguayan side who looked bland against New Zealand in their final group tie. Paraguay did set Italy on their way out of the tournament (and won their group, by the way), so they’re no cream-puffs, and though Man City striker Roque Santa Cruz has seen his mediocre club season follow him into the tournament, he’s still their best shot at unlocking the disciplined Japanese defense.

Anchoring the attack for Japan is the clever Keisuke Honda, whose free kick against Denmark is one of the top strikes of the tournament. His creative play and silky touch will be key in breaking down a Paraguayan side who conceded only one goal in group play. 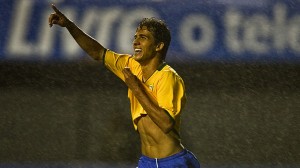 Wow! What a painfully boring game. To be fair, there were some great passes and fancy footwork and even a few nice upshort shots, but overall: weva.

I was also sad to see Kaka on the sidelines. He’s always fun to watch and I don’t like seeing him in his ‘street’ clothes. When he’s not in his kit, he looks kinda… girly. Sorry, Kaka, just keeping it real!

Ok so back to the matter at hand: Most Valuable Hottie. UGH – it was kinda hard to pick one, what with CRISTIANO RONALDO hogging screentime for most of the game. (Yes, he’s attractive… But the vanity! Arrogance! Perfectly shaped brows! BARF). But after careful consideration, I’ve decided that this match’s MOST VALUABLE HOTTIE award goes to…

Nilmar Honorato da Silva! Nilmar (born 14 July 1984 in Bandeirantes, Paraná), is a Brazilian forward, currently playing for Villareal. He’s a cutie. Didn’t do much during this match (though he did have 8 ‘won balls’ – and I think that’s good) – but he’s just so cute! And kinda little, which I like. K that’s it for now. Can’t wait for Spain v. Chile… HOLA GUAPOS!

In what promises to be the most entertaining match of Group of Death play, the 5-time cup winners take on their mother nation in what is essentially a showcase (as both squads are sure for the next round, unless of course Portugal lose and Ivory Coast win by 9 goals).

Lots of Portuguese being spit about the field, but we expect a pretty and clean game as Brazil are on the verge of finding their flair, while Portugal have quality peppered around the field, plus superstar gay icon Christiano Ronaldo.

Just came across this history lesson and video via the NYT Goal blog’s entry for this morning’s highly anticipated intra-lusophonal match:

And now, a history lesson. The Seleção and Selecção never played each other until 1956, but since then they have met 18 times. Brazil emerged the winner 12 times, with 2 draws, though most of the games were played in Brazil. Yet how often do you think these sister nations have clashed in anger? Answer: only once, at the 1966 World Cup … and Portugal won, 3-1.

That match at a packed Goodison Park in Liverpool — the meeting of the all-time greats Eusébio and Pelé — was the group finale for both teams, and it eliminated Brazil while sending Portugal on a path to the semifinals in their first World Cup appearance. Eusébio scored twice, but many remember the game for its hard fouls, especially the one from defender João Morais against Pelé: