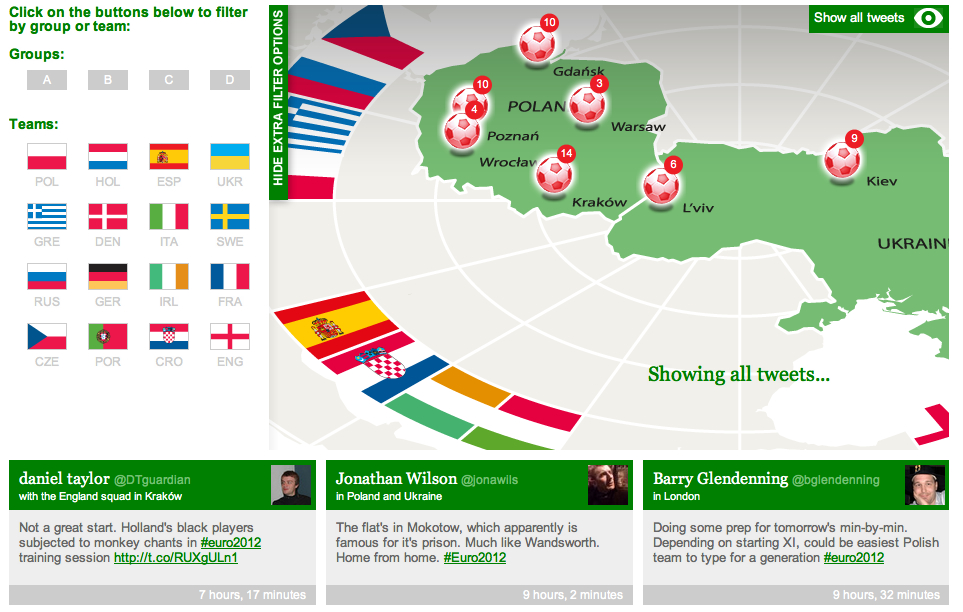 Part 4 of our Kicking Off Euro 2012 series: where to go for ongoing coverage over the next few weeks. We’ll try to be posting, but here’s where we’ll be going ourselves to keep up with the tournament:

Guardian Football: Our primary source for football news. Still anglocentric in its top headlines and most-read articles, but probably the least so of the English papers, Go directly to their Euro 2012 section (but also see below for a more detailed guide to their coverage).

ZonalMarking: The other site we’ll be visiting daily–the tactics blog run by Michael Cox, who also contributes columns to the Guardian.  He’s already posted team-by-team previews in his Euro2012 section, and will no doubt be posting match analyses daily.

If somehow we’re still hankering for additional commentary, we might drop in on the Euro blogs of FourFourTwo or In Bed With Maradona. We’ll probably call up Goal.com and espnfc.com on occasion. And lately we’ve been reading a lot of Grantland–encouraged to see there are two preview pieces up.  Though neither are by Grantland contributor Brian Philips, who is one of our must-read football writers, and who also oversees the infrequently updated Run of Play–so we’ll also be looking for commentary from him and on there (or lacking those, certainly via his twitter).

But more on the Guardian and their Euro 2012 coverage.  They’ve got their usual stable of excellent columnists covering the tourney–we’ll be looking in particular for commentary from Sid Lowe commentary on Spain; Rafael Honigstein on Germany; Michael Cox on tactics; Barney Ronay on the absurd; and Jonathan Wilson on historical, tactical, and Eastern European analysis and arcana.

No doubt those guys will be among James Richardson’s guests on the pod. During the season, it’s Football Weekly, which we listen to religiously twice-weekly. But for Euros they go into hyperdrive and morph into “Euro 2012 Football DAILY”; that’s right, a daily dose of the pod.

In addition to their usual contributors, the Guardian has assembled an “Experts Network” for the tournament (“A unique collaboration with media outlets from around Europe bringing a local flavour and expertise to coverage of Euro 2012 on guardian.co.uk”)–see Part 2 of Euro 2012 gear-up for links to the resulting team-by-team previews.

There will be plenty of their idiosyncratic liveblogs (often penned, we hope, by Barry Glendenning)–not only for every match, but also a daily liveblog for the tournament news:

You will be able to follow live minute-by-minute coverage of every game in Poland and Ukraine, while we will also have a live blog every day throughout the tournament as well. Our writers will be on hand with updates, both here, on our Twitter interactive and on daily live webchats every lunchtime.

As our ever, we welcome and look forward to your thoughts, comments, accusations of lazy journalism and bias both on Twitter and in the comments section below the line. If there’s a better way of whiling away the working day that doesn’t involve breaking the law, we certainly can’t think of one.

The Twitter interactive is something we just came across: an interactive map, showing what and where their writers’ are tweeting. You can even filter by venue, group, or team:

James Richardson is a multimedia juggernaut for the Guardian. He hosts their Football Weekly podcast (“James Richardson, Barry Glendenning, Sid Lowe and the rest of the Guardian’s football writers bring you their Sony award-nominated, twice-weekly podcast – mixing puns and punditry, a round-up of all the action from the Premier League and around Europe”) and also does a weekly video European newspaper review.

Listen to the prior (this week: “The pod ponders Darren Bent’s £24m transfer, Arsenal’s FA Cup win over Leeds and Ruud Gullit’s move to war-frazzled Chechnya”), watch the latter:

Amid all the pre– and post-El Clasico hype, we’d be remiss not to mention that the Quiet Bulgarian, Dimitar Berbatov, scored una manita himself over the weekend, in a 7-1 thrashing of Blackburn.

The NYT’s Rob Hughes devoted his “On Soccer” column on Monday–titled “Through Feast of Goals, Stealthy Genius Is Revealed“–to Berbatov and his performance:

Teamwork wins matches, but one man’s performance transcended all others Saturday.

Dimitar Berbatov, the Bulgarian in the Manchester United lineup, scored five goals in the 7-1 demolition of Blackburn Rovers.

Five goals, and I swear he spent half the match trying his best to set up a goal for his partner, Wayne Rooney. “It is good to have Wayne back,” Berbatov said after the game. “He knows how I play and I know how he plays, and we understand each other’s game well. We showed it on the field.”

Rooney is returning after he preposterously claimed United did not have the talents to match his ambitions. Berbatov chose Saturday to show Rooney and all the rest who doubt his quality that he is an extraordinarily gifted individual.

He had not scored a goal since mid-September, but on Saturday he scored five, and it could easily have been more. He was a ruthless destroyer with a velvet touch. His goals came in such a variety of ways that poor Blackburn did not know how to stop him, or even where to find him.

If you didn’t get to watch, nor haven’t heard the news, the world did not end Monday night in Barcelona–although no doubt there are a good number of people in Madrid who would disagree, as the result was almost as surprising and devastating as the apocalypse itself.  5-0 for Barcelona.  Yes, 5-0.

We’ll be back up in here with additional commentary.  For now, we give you some video highlights (down below at the bottom), and direct you once again to read Sid Lowe (who provides the best commentary in English on La Liga, at least that we’ve come across).  His column this morning in the Guardian is headlined “Barcelona, the ‘Orgasm Team’, win another epoch-defining clásico” (you’ll have to read all the way to the bottom of the column for the orgasm allusion), with subhead: “It was not that they thrashed Madrid 5-0, defeated Mourinho and his unbeaten €292m team. It was that they did it their way.”  And his first five paragraphs are devoted to explaining la manita:

Eric Abidal raised his hand. Gerard Piqué raised his. And the crowd that engulfed Jeffren Suárez raised theirs. Víctor Valdés raised his hand, latex glistening in the light. Soon the Camp Nou raised its hands. So did the fans that gathered down the Ramblas – palms open, fingers outstretched as if willing the nails to grow. Not far away, a hand was raised on the front cover of Sport. On the back, their cartoonist was taking the easy way out. “Today, instead of drawing,” he wrote, “I have decided to scan my hand.” So he did.

Meanwhile, right about the time Andrés Iniesta was posting pictures in his pants, in a warehouse somewhere they were already rushing off a batch of T-shirts to go with the Barça tupperware, Barça knives and Barça tool set. Blue and yellow and yours for just €9.95. On the back it reads: “great theatre”. On the front it doesn’t read anything much. Just the dateline and the score from last night’s clásico between FC Barcelona and Real Madrid: Camp Nou, 29/11/2010. 5-0. And, above that, a giant yellow hand.

Jeffren’s late goal made little difference, but it made all the difference. Madrid were already being humiliated. José Mourinho, already suffering his worst ever defeat as a coach, felt “impotent”, barely moving as fans chanted for him to “come out the dugout! José, come out the dugout!” It was already 4-0 and into additional time and Almería’s Henok Goitom,thrashed 8-0 by Barcelona last weekend, had long-since noted: “I know how you feel: you just want the game to finish.” But the game had not finished, not yet. The fifth goal had to arrive and when it did, it mattered. It turned a baño – a bath, a drubbing – into a manita, a little hand. A goal for every finger. The most perfect of beatings.

Especially for Barcelona. Because if manitas are symbolic in Spain – and even fans of Racing Santander have their T-shirt – in Barcelona there’s something even more emblematic about them. If Abidal didn’t know exactly what the gesture meant, Piqué, son of a Barça director and asoci from birth, certainly does. Last week, after that win in Almería, Cristiano Ronaldo had shrugged: “I’d like to see them get eight on Monday.” They could have done and eight would have been great, but somehow five, while fewer, feels more fitting today.

When El Mundo Deportivo called it a Super Manita, everyone in Catalunya knew what they were measuring it against. This was the fifth time Barcelona had defeated Real Madrid 5-0. Beyond 1934-35 and 1944-45, two linger in the memory: the 1973 team led by Johan Cruyff the player and the 1994-95 Dream Team led by Cruyff the coach. No one could watch last night and not recall Cruyff. Or Romário. Just in case, television programmes drew on the archive. Last night two epoch-defining victories became three.

See below for the best video clip we’ve found so far on footytube.  At least you get to see all five goals, although not much more, and with commentary in German.  Hopefully we’ll find some more extensive game film, and break down how exactly Barça was able to tiki-taka it’s way to la manita.

UPDATE: Via footytube, a 26min highlight reel from the French Canal+, hosted by the somewhat sketchy-seeming rutube.ru:

A red card 5 minutes into the game would obviously have repercussions sooner or later. Looking at the buildup to Arsenal’s first goal (Nasri, 20′), it appears to have been the former. Arsenal made nearly 20 more passes than City over the 10 minutes leading up to the goal, and you can see from the Guardian chalkboards below that they were running the midfield from front to back. Isolated groups of Man City players were trying to maintain the ball while waiting for players to support, but having one less man leaves too may holes to fill and Arsenal plugged them full of attacking movement.

Video highlights of the match below–the first of which is Boyata’s early foul of Chamakh and subsequent red card, and the second of which is Nasri’s goal–a great finish off a quick give&go with Andrei Arshavin (as indicated by the white circles in the top chalkboard above):
PL Highlights: Man City/Arsenal

Guardian Football has been doing a “World XI” series over the last couple weeks: “To mark Diego Maradona’s 50th and Pelé’s 70th birthdays, Guardian writers and readers set out to choose the greatest football team of all time.”

Here is the side chosen by the Guardian readership:

The odd man in is of course Steven Gerrard:

Looking at this World XI one name will immediately jump out at you: Steven Gerrard. He’s good, but is he really that good? The rest of the World XI is probably, give or take a personal favourite or two, the team most people would eventually choose. But how did Gerrard make it into the middle?

Click thru on the image to read all about it.

Today’s statement by Fat Sam has set us thinking along the same lines here at the CultFootball headquarters. While we have historically ranged in the high double–low triple digit daily readership, we’re of such quality that a more monied institution with better resources would 1. be lucky to have us, and 2. increase our hit rate thousands of times over.

What inspiration is it you ask? Allardyce’s “better than this” comments that were surely made from a pub stool:

“I’m not suited to Bolton or Blackburn, I would be more suited to Inter or Real Madrid,” Allardyce said. “It wouldn’t be a problem to me to go and manage those clubs because I would win the double or the league every time. Give me Manchester United or Chelsea and I would do the same, it wouldn’t be a problem. It’s not where I’m suited to, it’s just where I’ve been for most of the time.”

Well touch me in the morning, this guy is really on to something.