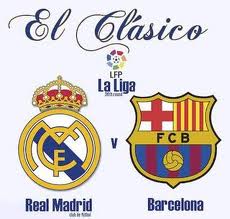 It’s no wonder that Sid Lowe saw the need to talk us down from all the El Clásico hype–before talking it up:

Contrary to what you might have heard, the world will not end on Monday night. The sun will rise on Tuesday morning. And there is life beyond the clásico. It’s just that right now, it doesn’t feel like it — it feels like nothing else matters, like no other games exist, like no other teams do. Every year Barcelona versus Madrid, already the biggest club game in world soccer, seems to get bigger. Even the old title seems worthless now. Derby? No thanks, this is the clásico. It’s even moved on from that. Now it’s the Super Clásico. Carry on like this and soon we’ll run out of superlatives.

And it’s certainly superlative. It’s almost ridiculous….Whichever way you look at it, this is probably the most extraordinary club match there has ever been. Until the next time, at least.

In terms of talent per square meter, you could argue that there has never been a game like it. It is possible that no two teams have ever dominated the planet’s talent like Barcelona and Madrid do now.

To get a better idea of how all that talent will matchup on the field today, take a look at this, which lists five key matchups to watch (1. Carles Puyol/Daniel Alves vs Cristiano Ronaldo/Ángel Di Maria; 2. Javier Mascherano or Sergio Busquets vs Mesut Ozil; 3. Ricardo Carvalho/Pepe versus David Villa; 4. Sami Khedira vs Xavi Hernández; 5. José Mourinho vs Pep Guardiola); or this, which gives a longer and largely different list of matchups–but closes with the same managerial matchup:

José Mourinho vs. Pep Guardiola from the sidelines, in the locker rooms, in front of the press, and on the training pitch. The Special One is the best in the world outside of Pep or Sir Alex at this point in time. But, it’s hard to pick a clear favorite here being that Mourinho won a Treble last year, while Guardiola won six trophies the season before. Last year, Mourinho won-out eliminating Barcelona from the Champions League. Has Guardiola learned from that lesson? I think he has. However, I see this coaching-bout being a draw between Emperor Mourinho Palpatine and Pep Skywalker Guardiola.

And for an idea of the historical context surrounding El Clásico, take a look at this column from 2002 by Phil Ball (who wrote Morbo: The Story of Spanish Football):

Not only is the dislike between the two clubs an interesting phenomenon in sporting terms, it also has implications that stray deeply into the sociology and politics of the country. It might not be going too far to say that the strife and struggles between the two clubs from 1905 onwards accurately mirror the very essence of twentieth-century Spanish history. The two cities have always been moving in different directions, partly through bloody-mindedness, partly through political allegiance, but mainly through clear cultural differences.

A supporter of Real Madrid seems a very distinct creature from a supporter of Barcelona, a fact that cannot be attributed wholly to the fact that they probably talk about football in a different language. Madrid is a bourgeois, grand, rather suffocating sort of city on first acquaintance. The surrounding countryside is bleak and bare, – suggestive of some harshness in the citizens. To an outsider it is not a welcoming city – its taxi drivers grumpy and sullen, its waiters coldly efficient, its shops too self-consciously trendy. Madrid was built on and is sustained by the notion of centralisation – in this century exemplified by Franco’s obsessive opposition to regional nationalism, which he regarded as one of the principal reasons for the turmoil of Spain’s ill-fated second republic.

Madrid was symbolically in the geographical centre of the country, put there by Felipe II in the mid-sixteenth century. It is part and parcel of the Madrid-Barcelona morbo that the latter seems to inhabit a different planet. Despite the fact that Madrid has the Prado, the seat of government and the royal family, according to John Hopper’s book The New Spaniards almost all the ideas that have shaped Spain’s modern history – republicanism, federalism, anarchism, syndicalism and communism – have found their way into Spain by way of Catalonia.