Like a Wes Anderson film or a Kurt Vonnegut book, Mourinho’s teams have a distinct and recognizable style. They’re known to “park the bus” and happily take a 1-0 win. His forwards are fully expected to track back and anyone unwilling to do so will be sold (Mata’s fate) unceremoniously. Mourinho’s style has become full-blown at Chelsea where it was only nascent and semi-developed at his earlier clubs. Unsurprisingly, some scoff that it wants for aesthetic pleasure.

Chelsea’s recent league match against Hull City was met with disapproval and classified as a typical Chelsea skin-of-their-teeth win. The disapproval is born of a belief that only beautiful football deserves to win. It’s a debate that will never die, but a win is a win. Mourinho can opt to stay out of the debate while he surveys the league from the top of the table. 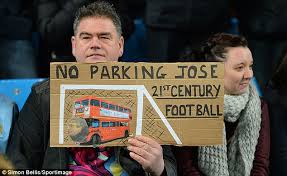 Mourinho’s style is tried and true in all sports. Tennis’ Brad Gilbert wrote a book on it called Winning Ugly. Displays of skill and dazzling footwork do not yield goals worth more than a gruff Ivanovich header, right? Mourinho is utterly rational and pays no heed to those who romanticize sport as art to his denigration.

Sure, Chelsea is capable of creating moments of beauty–but it’s hardly known for them. In fact, a recently lauded moment was the goal produced by Terry and Cahill, scored by Ivanovich. You can imagine that this was not a Maradona beautiful goal–but it was “Chelsea beautiful”. The goal was exemplary of Chelsea’s singular brand of Mourinho football, in which forwards can defend with skill and defenders can score spectacularly.

You shouldn’t expect a 5-0 rollicking of Hull if you know how Chelsea plays. Mourinho’s squad relies on good defense, which is heavily dependent on all of the field players tracking back. This keeps opponents from scoring as frequently as they might otherwise, but it also prevents a greater quantity of goal scoring opportunities. The score lines are accordingly prosaic, with only three relatively high-scoring league matches this season.

The match against Hull should not be used as evidence that Chelsea doesn’t deserve their top spot. They have consistently prevailed using the ‘winning ugly’ technique Mourinho has instilled in all of his players. Sometimes we forget that the beauty of the beautiful game is incidental. The late David Foster Wallace said it best, “Beauty is not the goal of competitive sports, but high-level sports are a prime venue for the expression of human beauty. The relation is roughly that of courage to war.”