[Editor’s note: The good folks at Vocativ.com asked for an article on the Real Group of Death, and Rob from the Cult Football crew gave it his take. Check out the excerpt below and the full article on the Vocativ site. Another article on Klinsmann and lessons to learn from the Hungarian Golden Team of 1953 to follow.]

Fans salivate over the Group of Death that every World Cup inevitably thrusts upon unlucky heavy hitters cage-matched in the same group. This year, however, regional factions are debating which group qualifies as the real Group of Death for Brazil 2014.

American media says Group G—Germany (FIFA rank: 2), Portugal (4), the U.S. (13) and Ghana (38)—holds the title, hands down. In England, tabloid headlines sound a different alarm: English Premier League high-scorer (and convicted biter) Luis Suárez leads Uruguay (7) with canines bared against Italy (9), England (10) and Costa Rica (28) in Group D. But the real Group of Death, in our humble opinion, features a rematch of the 2010 final and allows no margin for error.

The insidious nature of Group B means that coming second equates to a stay of execution. In fact, think of Group B as having only one actual qualifying spot. Spain (1), Chile (14), the Netherlands (15) and Australia (62) will all have to bare-knuckle for first, because the group runner-up plays the winner of Group A, and as sure as Pelé talks about himself in the third person, Brazil will top its group.

You could argue that Brazil winning isn’t a sure thing, but consider this: Host countries almost always perform over the odds, and Brazil is already a super heavyweight. The team has the goal-scoring exploits of Golden Boot contender Neymar (Barcelona), Hulk (Zenit St. Petersburg) and even defenders like Dani Alves (Barcelona).

Host nations have won five of the 19 World Cups. In recent years, France won France 1998, South Korea got to the semis of South Korea/Japan 2002 and Germany reached the semis at Germany 2006. Anything less than a Brazil World Cup victory will amount to a national tragedy—not unlike the 1950 final in which Brazil lost to Uruguay in the dying minutes on home soil, one of the darkest days in the nation’s collective memory, even 64 years later. Desperate to rectify that loss, the Seleção need no motivation.

What our position comes down to, essentially, is that the other groups saddled with the Group of Death label will still send on two teams to live another day. So while Group D has three top-10 teams, Italy will take the top spot, leaving Uruguay and England with an eminently dispatchable Costa Rica and a fair fight between themselves. Uruguay barely qualified for the World Cup; England bottles it at big tournaments. May the best team win.

All four teams in Group G would normally emerge from their group, but Germany could potentially win the tournament, and a Portugal with Cristiano Ronaldo fundamentally has the firepower to progress even if the defense leaks goals. Still, both the U.S. and Ghana have the quality to beat Portugal, so ultimately after a fair fight, the best two progress from a tough group.

In Group B, however, either Spain, Chile and the Netherlands will miss out, and then one lucky non-loser must play Brazil. So after Brazil likely slaughters Croatia June 12 amidst the opening day pandemonium, Spain and Holland face off in Group B—two returning finalists drawn in the group stage for the first time. And those two progress, yes? Not so fast. … [continued]

Brek Shea’s season may have ended when the New York Red Bulls knocked FC Dallas out of playoff contention last week, but the 6’3” winger will spend a month training with Arsenal after the upcoming international friendlies in France and Slovenia (November 11 and 15). The Texas native has been linked with a move to Europe and has publically stated he would like to ply his trade in Europe one day. If he impresses, perhaps Arsenal will make an offer Dallas cannot refuse.

According to Dallas FC, “The decision to send Shea to train with the Gunners was made after USA head coach Jurgen Klinsmann encouraged his MLS-based players to spend the off-season training overseas to enter January camp in top shape.”

Without a doubt, Dallas does not want to lose Shea. He still has three years on his contract. But the MLS season doesn’t start up again until March. Perhaps a loan deal could be in the cards.

Wenger mooted the idea that Shea may play a game with the Arsenal reserves, if possible.

Wenger told ArsenalTV: “(He’ll) practice with the top team when it’s possible, practice with the best prospects of the club as well outside the normal sessions and have a contact with top level football in the world and there’s no better place than the Premier League to do it.” 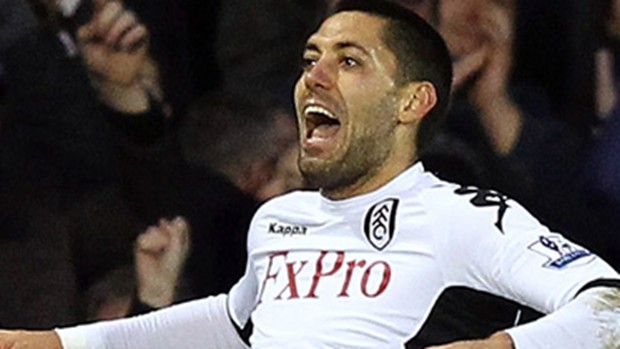 When Clint Dempsey scored for embattled Fulham in the 2-0 victory over Wigan this weekend, he tied the record of former U.S. international Brian McBride as all-time highest American goal scorer in England’s top flight. (McBride did loan spells at Preston North End and Everton before his tenure at Fulham.) The pair also share another distinction, along with Landon Donovan they are the only American players to have scored in multiple World Cups.

The 28-year-old Dempsey now has 36 league goals in his Premiership career. He also holds the record for highest goal scorer at Fulham, where he joined from the New England Revolution in 2007. Only the most down and out gambler would bet against him extending that onward and upward. Duece be doin’ it up. Clint D, Nacogdoches, represent.

For those who have never checked it out, watch him shout out an alternate reality in which he’s a  platinum-finned dolphin. It’s astounding that he has the balls to rhyme with cameras capturing it all for posterity. But you can’t help but love this clip. Could anyone actually hate a player dophin?

Don’t hate, celebrate (with Clint). Perhaps by reliving his incredible chip at Juventus in the 2010 Europa League.

There’s a lot of rumbling about Coach Bob heading to Birmingham to take over at Aston Villa after Martin O’Neill’s surprising departure just days before the season starts. It’s been a strong side, and O’Neill has done well during his tenure there. His leaving was as sudden as it was mysterious, though most assume he was simply fed up with the transfer pot at his disposal.

Bradley has 11/4 odds of being selected, and he was given polite backing by Sir Alex during Man U’s tour of the States. Before the Brazil matchup last night, Tim Howard thought better of criticizing the coach:

There’d be a learning curve for certain, but Bradley is a decent tactician and clearly knows how to motivate his players. He prepares well, his teams are always fit, and I think he’d make a good showing holding the reins at Villa. I say go for it, Bob!