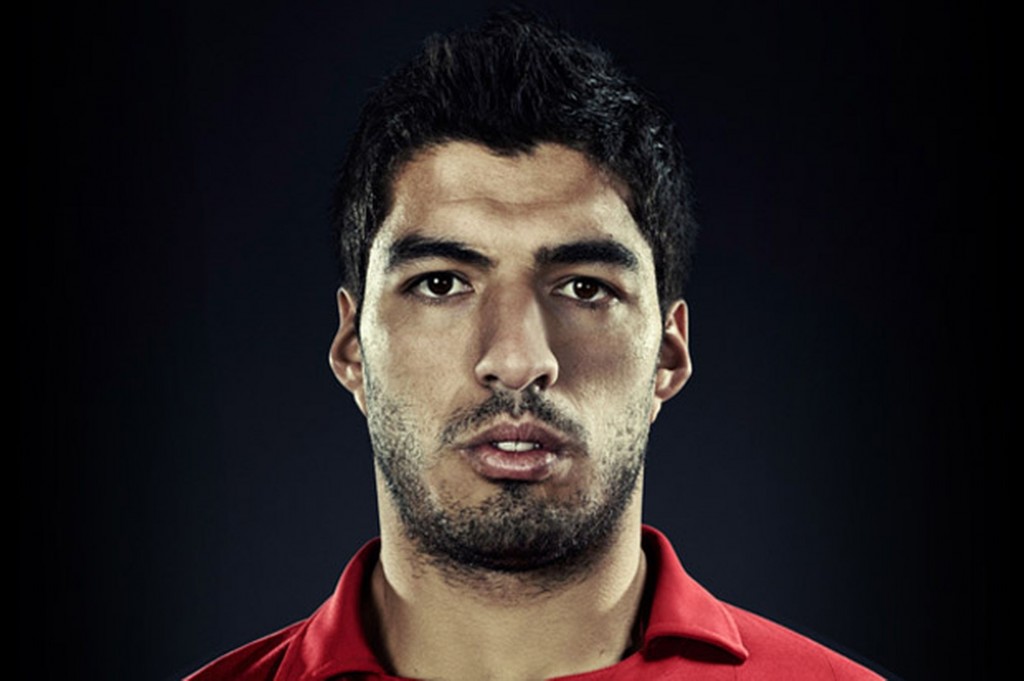 Liverpool striker Luis Suárez is in amazing form, the kind of form that makes a Big Red fan forget about the summer past. That whole lark about the Uruguayan wanting to leave the club, doing anything to leave the club, saying he had a verbal agreement with the club that he could leave, and then the manager Brendan Rodgers essentially called him a liar. None of this matters now at LFC, because he’s in the form of his life, leading the goal charts in England despite missing the first six matches of the season by dint of violent conduct (with his teeth).

Suárez’s run has displayed the sort of impeccable form you can’t help but admire, possibly with jealousy, as an opposition fan, though it doesn’t remotely trigger the Red Liverpuddlian amnesia regarding his back-to-back biting incidents at Ajax and Liverpool. Nor his alleged punch on a Chilean defender in World Cup qualifiers, unseen by the ref at the time, left to slide afterwards. The deliberate handball to block an extra-time inbound header, denying Ghana a goal and ultimately (with a missed penalty) passage to the next round of the 2010 World Cup. And lastly, the man who said that what he said to Patrice Evra wasn’t racist in Uruguay but, upon learning the English connotation of “negro” (Spanish pronunciation), still decided to blank Evra in the next Liverpool-United handshake. He intentionally dumped fuel on the fire in now-full knowledge, he refused to back down despite the fact that both club and manager ordered him to shake Evra’s hand.

Anyhow, just watching the 90 minutes in the midweek match against Norwich, 4 goals and an assist for the fifth, the first and third goals of the most insanely incredible quality, leaves you convinced. Luis Suárez has undoubtedly ripped the mantle of best striker in the league from whomever held it last (Robin van Persie has a hurt shoulder socket in addition to his ongoing groin and/or toe problem). He receives nothing like the service of Agüero, but it doesn’t matter. He ultimately scores when he wants. Despite missing the first six matches of the season through suspension, he’s the league’s high scorer, at 13. He’s scored more goals than games played.

Liverpool fans see his work rate, his final product, their place in the table, and assorted clips of him as warm and fuzzy with his young family and generally think, serenity now, summer water under the bridge. And Suárez does give a hundred percent in everything for the team. He’s just not necessarily as tied up in what that team is at the moment. The Suárez agitation in the press was first portrayed as possibly mistranslated words to the Uruguayan press. That is, until he gave an interview with the Guardian officially announcing a desire to move and a supposed reneging on a verbal promise with Brendan Rodgers and the management. Brendan Rodgers outright denied the claim, declaring Suárez would have to apologize to the team and the manager about what was presumably a bald-faced lie.

All this, of course, transpired through not only an interminable summer with bizarre £40,000,001 bids but also during his 10-game ban for unprovokedly and inexplicably biting Branislav Ivanović in the late Spring matchup against Chelsea. Which followed a November 2010 chomp on a PSV player while at Ajax. Ajax promptly sold Suárez–he had, after all, come to them after a highly-public, acrimonious departure from his former club Groningen, whom he took to an arbitration court but against whom he lost as the court found against him. Everyone recognized a genius with a trouble streak. And with the genius came the occasional Mike Tyson special.

If Suárez gets a pass for a different original cultural connotation to what began the furor with Evra/FA racism charge, he can’t claim that for directly countermanding the orders to club and manger to shake Evra’s hand–a question of interminable interest to the prematch proceedings. He served his eight-game suspension, he coughed up an £40,000 fine, but he chose not to shake Evra’s hand, despite now knowing the public opinion, which ranks as insubordinate, if nothing else. It smacks of acting bigger than the club, something Liverpool fans perennially claim the club will never tolerate, despite all present evidence to the contrary. Yet, as with Stoke and the fans’ continual booing of Ramsey for appallingly forcing Shawcross to act recklessly, break Ramsey’s leg and sideline Ramsey for over a year, club loyalty can cloud the vision, especially with regard to a far-and-away star player like Suárez. The man literally creates goals out of nothing. Who doesn’t love a magician?

Suárez and his goalie’s instincts helped Uruguay claim 4th at the 2010 World Cup. (He later said of the goalmouth handball, “I made the save of the tournament.”) After steering Uruguay to its 15th Copa América in 2011, he won player of the tournament. He’s Uruguay’s all time highest scorer and leads the Barclay’s/English Premier League in goals with 13, despite having missed the opening 6 matches thanks to his summer-spanning biting ban. Uruguay go the the 2014 World Cup in Brazil on his shoulders, and Liverpool’s top-four ambitions rely on him just as pivotally.

As a serial disciplinary case and goal muncher, however, he has no compare. But unlike John Terry, he’s not sleeping with wives and girlfriends of best friends/teammates. So, there’s always that. And he scores more goals, slips less hilariously, has a better pistolero goal celebration.

He’s a great player who acts periodically violent/dirty towards opposition players and has an on-again, off-again relationship with his club. He will almost undoubtedly turn on Liverpool again at some point. If and when that happens, we’ll see how everyone feels about the man who currently divides so much opinion. Liverpool fans may then remember a couple things that bugged them at the time, something naggingly disloyal, perhaps, which at present they can’t quite put their fingers on.

Uruguayan and Ajax striker Luis Suárez has been suspended from play by his own squad for biting PSV Eindhoven winger Otman Bakkal (you can hear the commentator reference Tyson in the video below).

Suárez and Forlan were so impressive during the summer’s World Cup, and we’ve hoped the best for the both. Forlan has been lackluster, but Suárez has 6 goals this season and though he’s not allowed to play in league matches for a couple games, he will be in play for the champions leagie match against Madrid.

Will Real Marid be able to score away from home? Will all the talk and camera time get monopolized by Mourinho, or will Marseilles manager Didier Deschamps also get a bit of attention?

Will Arsenal rebound from their debacle Saturday? Will Lukasz Fabianski prove any more capable than the injured Almunia?

Will Martin Stekelenburg do as well (or even better) against AC Milan’s, compared with his stellar albeit losing performance against Ronaldo, Higauin, Ozil et al two weeks ago? Will he get any help from Luis Suarez if the need arises?

We just received this opinion piece out of Mexico via email from our friend Marcelo.  Marcelo is a native son of Montevideo, a fan of Penarol and of course a close and longtime follower of the Uruguayan national team (we were talking World Cup history with him over the weekend, and he said the first World Cup he remembers is 1974–when, in a bit of historical resonance, Uruguay fell to the the famous Dutch side in the group stage).