It’s the post-Easter bank holiday in England, so there’s a full slate of Premier League games today.  But we choose just the late game in London, and from further south on the Continent another derby from another great European footballing capital.  Both featuring Champions League sides (the London one having beat the Lisbon one just recently, in fact) against local rivals that are a bit further down in the table:

Fulham vs Chelsea (3pmET; ESPN2, ESPN Deportes, ESPN3.com): Fulham, in their usual mid-table inconsistency (#11), host local rivals Chelsea (#6). Story at Fulham has been American Clint Dempsey, who by all accounts is having the best season of any American soccer player ever. But as we’ve said before, Fulham is more than the Deuce–we like Costa Rican playmaker Bryan Ruiz as well as young Belgian Moussa Dembele.  For Chelsea, the storyline of the season has twisted close to 180˚ (π radians, if you will), with the sacking of Andre-Villas Boas and their resurgence–at least in the Champions League–under iterim Italian Roberto di Matteo.  That said, their chances of requalifying for the Champions League are growing hanging by a thread.  They’re on 56 points, 3 behind both Newcastle and Spurs–so with a win here, they’d merely pull even in a tie for 4th.  It could very well come down to goal differential between these three, with Arsenal seemingly consolidating their claim on 3rd following yesterday’s stunning memorable win over Man City (more on that match to come).

Sporting CP Lisbon vs Benfica (3:15pmET): The heated and long-standing (dating to 1907) the Derby de Lisboa—“also known as Derby Eterno, Derby da Segunda Circular or Derby da Capital”: Sporting Clube de Portugal versus Sport Lisboa e Benfica, Leões contra Águias.  Unlike the London derby, this one actually matters for the domestic title race–Benfica is 2nd in Liga Sagres with 59 points, and needs to win to keep pace with 1st place Porto (their other big domestic rivals), who beat 3rd place Braga on Saturday to go up to 63 points (leaving Braga stuck on 58).  Benfica’s got a fun squad to watch, and they very well could have pulled off the upset at Stamford Bridge last Wednesday to eliminate Chelsea from the Champions League.  From our preview for that matchday: 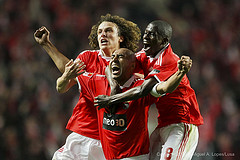 Barcelona beat Milan 3-1 in yet another controversial Camp Nou Champions League result, while Bayern finished off Olympique Marseille with another 2-0 victory, for an aggregate score of 4-0.

Chelsea vs Benfica: The match to watch on Wednesday.  Chelsea pulled out a 1-0 victory at the Estádio da Luz in Lisbon last week–continuing a remarkable turnaround from when they were down 3-1 after the first leg in Napoli in the Round of 16.  We’ll be rooting for the Portuguese.

Well, turns out there aren’ aren’t many actual Portuguese in Benfica’s squad.  For instance, Ben Shave‘s list of 5 Benfica players to watch, published prior to the 1st leg, consisted of a Brazilian (goalkeeper Artur), a Uruguayan (defender Maxi Pereira), a Spaniard (holding midfielder Javi Garcia), an Argentine (aging semi-legendary playmaker Pablo Aimar), and a Paraguayan (striker Oscar Cardozo).  You can add to that list two more young Benfica players we’ve been hearing a lot about: Argentine Nicolás Gaitán and afro’ed Belgian Axel Witsel (attacking midfielders both).

And on the other side of the ball, Chelsea’s Brazilian duo of David Luiz and Ramires both started their European club careers with Benfica (whereas Chelsea’s Portuguese players–Raul Meireles, Jose Boswinga, Paulo Ferreira–broke thru domestically with Porto.  Not a coincidence, as all three played under Jose Mourinho at Benfica’s northern archrival before eventually following him to Stamford Bridge.)

Listen to CNN’s Pedro Pinto sitting in on this week’s Guardian Football Weekly podcast for more on this depressing aspect of Portuguese football. In fact, listen to the whole thing–includes a preview of this match, and then at the end Sid Lowe and the rest of the pod also previewing Barcelona-Milan.

Real Madrid vs APOEL: If Bayern-OM is medium-well, this one is completely well-done. Madrid won 3-0 in Cyprus.  Only reason to watch this one is to see some of the talent that’s been wasting away on Mourinho’s bench all season–players like last year’s Bundesliga player of the season Nuri Şahin, who finally got a start in the 1st leg.

(It’s a shame Sahin didn’t stay with Borussia Dortmund.  We’ve been seeing reports that Madrid (Morinho?) don’t think he’s made the transition–maybe we can hope for a loan back to Dortmund next season?  Dortmund’s chief has called the transfer a mistake (on Sahin’s part?), but seems to be ruling out a return.) 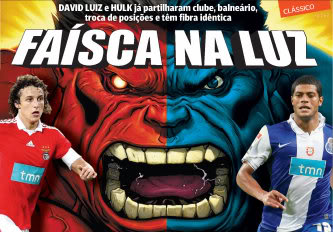 …make it O Clássico, “arguably the most important match in Portuguese football,” kicking off later today at the Estádio do Sport Lisboa e Benfica (aka the Estádio da Luz):

SL Benfica vs. FC Porto, 3:15pmET (available via ESPN3.com in the US; see here for other TV listings)

Not only is it a classic and heated Portugese rivalry, the two clubs are currently battling it out at the top of the Primeira Liga table–even on points with identical records, with Porto ahead on goal differential.

Here’s what the top of the table looks like:

We have to admit, we’re not close observers of Portuguese domestic football, and hence the only times we’ve seen either of these clubs play has been when Porto has played in the Europa league, last season en route to their title in that competition, and over the past few weeks when they were eliminated by Manchester City.

Actually, here is what we wrote last spring, ahead of Porto’s victory of Sporting Braga in the Europa League final:

They’ve had a remarkable season: they won the Liga Sagres going away, going undefeated in the process (27 wins, 3 draws, 0 losses).  They were also undefeated in their Europa League group, and marched through the knockout phase, beating a couple Spanish and a couple Moscow clubs along the way: Sevilla, CSKA Moscow, Spartak Moscow, Villareal.  (Braga dropped down from the Champions League after finishing third in their group behind Shakhtar Donetsk and Arsenal, although they did defeat Arsenal 2-1 at home in November. In the Europa knockout phase, they beat Polish Lech Poznan, before upsetting Liverpool, then Dynamo Kyiv and finally another Portuguese power, Benfica, in the semis.)

For today’s match, keep your eye on the handful of rising stars on their squad, quite a few of whom are South American: the Brazilians Fernando and Hulk (yes, the Hulk); Colombians Falcao and James Rodríguez; Argentine midfielders Fernando Belluschi and Nicolás Otamendi; Uruguayan defenders Fucile and Álvaro Pereira. They also have a few Portuguese internationals (midfielder João Moutinho, winger Silvestre Varela, the Cape Verdean-born defender Rolando).

All of those players are still with the squad, with one big exception–striker Falcao was sold over the summer to Atletico Madrid.

I’m really excited about the EPL starting. I’m out of town, and I won’t be able to see any of the games live, but I’ve set my DVR and I’m sure no one will text or tweet or email about results. When I get back home on Sunday night I’ll just sit on my couch and watch kickoff as if it was only just happening at that moment.

And since I don’t even want to even think about the EPL I’ll turn my brain energy upon the return of Freddie Adu to the United States and MLS. The little Ghanaian is back from a harsh go in Europe. I blame the system.

Here we had a promising young player, who maybe isn’t really as young as we say he is (that one’s for you, Conspiracy wonks). We send him overseas to be developed. He moves to Benfica during his late teens, a stranger to the culture with his head full of grand ideas bled in from agents and sportswear marketers. His confidence dissolves while he’s alone in a foreign land. He struggles and is moved and moved, and so far we haven’t seen the player for whom we’d hoped.

It’s unlikely he had adequate support when he most needed it, but that’s par for the course when bringing in foreign players to a strange system thousands of miles from their homes. Many clubs buy their athletes for big money then drop them into play as if they were a new part, unpacked from the shop. Kids fall through the cracks, unable to keep up with the demands of advanced football while simultaneously finding a home, learning a language, figuring out how to get laid. It’s tough out there.

So he’s back. Philadelphia, a city whose teams I support to the one—the one being the Union. There was no Union when I lived in the Delaware Valley. In theory, I support the Red Bulls. In theory, because I don’t really pay them much mind. But they’re my local team, and while I’m happy to see if Feddie can blossom in the city of brotherly love, he can also go to hell.