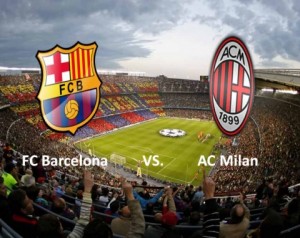 There aren’t many bigger clubs than Barcelona and AC Milan, so it’s quite a pleasant surprise to have them meeting on Matchday 1. Unless there are some serious surprises over the next couple months, they should finish 1-2 in their group–it’s hard to imagine either of slipping behind Zenit St. Petersburg or Cyprusians APOEL FC (see our run through today’s fixtures for a full account of what APOEL is an acronym for)–so their two matches should be crucial, determining who finishes atop the group and gets the better seed going into the knockout stage (which doesn’t start until five months from now, in Februrary).

Frankly, though, it will be a quite a surprise if Milan finish with more points than Barcelona.  The latter are, of course, as you’ve likely been hearing ad nauseum, one of the greatest club sides in the history of the game: two Champions League titles in the past three years, plus La Liga champions in each of those three years.  All achieved with not only an incredible collection of talent–led of course by Lionel Messie–but with a tactical style that could very well be the next evolutionary step in the game.

(We’ll post more about that latter idea in the near future; for now, read Goal.com’s Peter Staunton‘s column titled “With the signing of Arsenal’s Cesc Fabregas, Barcelona could begin the next great tactical revolution” (“Pep Guardiola has become adept at using midfielders ‘out of position’ at centre-back. But what if that was the plan all along?”).)

(Indeed, these two sides met in the final of the 1994 Champions League–Milan was managed by Fabio Capello, who had succeeded the legendary Arrigo Sacchi at Milan, while Barcelona was managed by none other than Johan Cryuff.  The latter were favored, but Milan destroyed them 4-0.  See here for video highlights of that match.)

But although the current Milan side was top of the table in Serie from start to finish last season, they don’t feel particularly imposing.  In the Champions League last spring, they were knocked out of the Round of 16 by Spurs, who were subsequently exposed by Real Madrid (and in the Premier League) as not an especially strong side themselves.  They’ve got a big name multinational strikeforce–Pato, Inzaghi, Ibrahimovic, Cassano, Robinho–but they don’t come across as big game players (aside from perhaps the aging Inzaghi).  Ibrahimovic is out for today’s match due to injury, so it will likely be Pato and Cassano partnering up front.

Behind them, are they still going to rely on Clarence Seedorf to give them some presence in the midfield? Probably not–against Lazio in Milan’s Serie A season opener against Lazio, they played Ghanaian Kevin-Prince Boateng in an attacking midfield role, ahead of Alberto Acquilani (recently returned to Italy on loan from Liverpool) and hard man Rino Gattuso.

It will be interesting to see if those three can manage to contain Barcelona’s midfield.  Somehow we think it unlikely, given that no one else has managed to over the past few years.  Xavi, Iniesta, new arrival Cesc Fabregas, Sergio Busquets pushing forward from his holding role, Lionel Messi dropping deep from his center forward position, Dani Alves and Adriano flying up the wings..there’s a lot there to deal with in the middle third of the pitch.