Sean’s excellent postgame analysis of Wednesday’s tense and memorable Copa del Rey final included the video of Sergio Ramos dropping la Copa under the bus.  Here is video from the match itself, followed by some micro-analyses of key sequences in the 1st half.  We’ll follow up with commentary on the 2nd half and extra time highlights over the next couple days.  Certainly prior to the next El Clásico (3 of 4)–back to the Estadio Santiago Bernabéu on Wednesday, for perhaps an even bigger match–the 1st leg of the Champions League semifinal matchup.

Comments on 1st half highlights:

The first highlight (0:00-0:50 of the clip, 11′ of the match) illustrates Madrid’s quick counterattacking in the opening half.  The play is created in the initial 10 seconds–we suggest you watch that segment a few times: notice how Madrid left winger diMaria picks up the ball in a crowded space along the touchline and quickly splits a couple Barça defenders. In particular, he gets behind Barça’s attack-minded right wingback Dani Alves; the diMaria-Alves matchup on this side of the pitch is one to focus on.

Özil (#23) is initially standing inside towards the center, but as soon as diMaria breaks through, Özil sprints up the inside left channel, finding a seam of space in between Barcelona central back Pique (#3) and left wingback Adriano (#21).  It’s a great run by Özil, with credit also due to diMaria for slotting the ball through into Özil’s path.  Meanwhile, Cristiano Ronaldo is initially on the far side of the field very close to diMaria, but he sprints behind Özil’s run into the empty space in the center–the space that’s opened up when Pique steps towards diMaria’s penetration and Adriano chases Özil across.

Özil receives the through ball on the left flank, does a little pirouette, and chips the ball over and across onto Ronaldo’s foot–note how the ball floats just over the head of Pique.  The Catalan center back did well to recover towards the middle in an attempt to track Ronaldo’s run, but Özil’s ball was measured just right.  Just those few seconds–the run, the turn, the pass– show the creativity in Özil’s movement, vision and passing that’s earning him such as praise in his first year at Madrid.

With a better first touch CR7 should have created an excellent chance to score here.  Imagine how different the game would have been had he put Madrid up in the 11th minute–but his first touch betrayed him, and the ball skittered almost to the touchline.  Ronaldo did well to still put the ball on net, but from a sharp angle, and by that time Barça’s defense had recovered, and Mascherano cleared off the line.

The next segments show Barcelona enjoying some of their typical tiki-taka possession–knocking the ball around, back and forth, from side to side–but mostly in their own half, with their last attacking move in the forward part of the pitch breaking down.  Some credit goes to Madrid’s defenders closing and denying Barça space and time for that final move–but also Barça’s passes and touches seemed just a hair less precise than usual.  Watch starting at 0:56 (17′): a lengthy buildup of Barça passes eventually leads to Messi being chopped down on the right; a quick restart by Xavi picks out Pedro on the left, who passes back to Iniesta in some space in the middle–but the latter’s chip over the top intended for Villa back on the right wing isn’t quite wide enough, and is well defended and cleared by Marcelo.  Barça maintain possession off the resulting throw-in, leading to another speculative through ball from Dani Alves in to Villa in Madrid’s box.  But Villa has three Madrid defenders closing on him, and his touch fails him as he tries to collect and turn with the ball.  ((Note how Alves breaks up the right wing after playing the ball through, hoping to combine with Villa on a give-and-go.  That’s a combination that has led to a lot of Barça chances this season–but it doesn’t click in this match.  Note also that that segment is capped with a closeup replay of the initial foul on Messi–it’s Pepe who gets him, and it certainly looks like the Brazilian-born Portuguese international intentionally drives his cleats into little Leo’s ankle.  Nasty stuff.)

Going the other way again, another quick Madrid attack starts at 2:45 (26′), and it comes up their left side again–the trio of Marcelo, diMaria, and Ronaldo combining well, for not the last time in the match.  Marcelo picks up the ball off another poor Barça touch, plays a nicely weighted ball up to CR7 in the center circle.  He takes a single quick touch to turn–the quickness of his feet is impressive–and with his second touch plays a surprising stretching diagonal through ball towards the far corner flag.  That’s the space behind Dani Alves, and it’s diMaria who once again gets behind him and runs onto the ball.

Note that when Marcelo plays the initial ball into Ronaldo, diMaria is just about even with Marcelo, just inside their own half, with Alves ahead of him.  But Ronaldo’s ball is just in the right place behind Alves, and diMaria has the jets to beat Alves to the spot.  Usually Alves can rely on his speed to recover and catch whoever’s he’s ostensibly supposed to be marking–but that’s not always the case with diMaria.

(Taking a glance at the center of the pitch, it’s worth noting that in this sequence, Sami Khedira (#23) breaks forward and initially gets behind Adriano, in hopes of receiving a potential cross.  Sean has noted that out of much-scrutinized defensive midfield “trivote” of Pepe, Xabi Alonso, and Sami Khedira that Mourinho has employed in these last two games, it’s Pepe or Khedira that have surged forward on counterattacks.)

But back to diMaria and Alves. In fact Alves is able to recover and gets back in front of diMaria to prevent a cross, allowing defensive help to arrive in the form of diMaria’s fellow Argentine Javier Mascherano.  Mascherano does well to tackle, recover possession, and with another touch start a Barcelona counterattack back up the same wing.  It’s Pedro who’s on Barça’s right attacking wing now (having switched sides with Villa).  Mascherano’s ball puts him behind Pepe, who’s called for foul him and draws a yellow card as a result.

(Aside: Mascherano struggled to adapt to the Barça style of play last fall after arriving from Liverpool, but he’s become increasingly accustomed and important to Barça’s play, especially as they’ve lost Puyol and Abidal to injury and illness–and as Busquets has exposed himself with some shaky defending at times.) 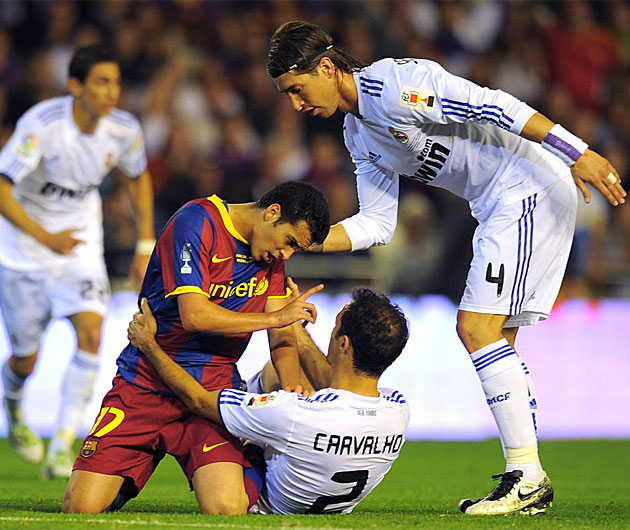 That first yellow card leads to a stretch of nastiness.  A couple of conflicts between Madrid defenders and Barça forwards (Arbeloa and Villa, Carvalho and Pedro)–both, interestingly, resulting from Barça uncharacteristically trying to play long “route one” balls over the top–which lead to a couple more yellow cards and a couple scrums.

(Another aside: we saw some comments after the match that Barcelona were missing the Plan B that Ibrahimovic or even Eto’o before him could have provided–a strong striker that could win those sorts of battles for balls over the top.  Recall, for instance, the pair of such goals Ibra scored against Arsenal in the first leg of the Champions League matchup last spring.)

Madrid counters again in 36′ (5:10 in the clip), after Pique steps forward to intercept but misplays the ball.  Again it’s Özil who creates for Madrid; he snatches the loose ball and the break is one–one touch to move forward, his second touch putting Cristiano through.  With Pique caught up and out of position, it’s Busquets who’s chasing–and as the commentator notes, CR7 has Busquets beat for pace.  But Busquets does decently to keep Ronaldo on the outside, but he gets a good shot on goal, well-saved by Barça goalkeeper Pinto.  But take a look at what happens off the rebound: it falls to Busquets–who attempts a cheeky pullback right in front of his own goal.  Barça doesn’t pay for it here, and instead wins a free kick after Pepe punishes him; but it’s another instance of shaky play from Busquets, something Guardiola cannot be happy about.

But the best chance of the 1st half comes shortly after (5:53; 44′).  Somehow Pique is again caught up far forward and loses possession, and Madrid immediately counters.  Arbeloa hits a long ball over the top–and it’s again it’s Özil on the ball, run into the space in the flanks.  Pinto does well to come out of his area to clear, but the threat isn’t over, and once again it’s Ozil and Ronaldo behind it.  The two combine with an impressive bit of volleyball over a couple Barcelona defenders off the ensuing throw-in (note also how Cristiano sprints forward to take the throw quickly). Ronaldo throw to Ozil’s chest, who dinks it back to him; he shoulders it back to Ozil, who chests it down–and then the genious of Turkish-German is displayed again, as he suddenly changes the scale of play.  Four Barcelona defenders have been sucked into the vicinity of this Özil-Ronaldo tea party, leaving Dani Alves alone in the box.  Özil perhaps sensing this (that instinct again) swings a cross into the box.  It’s Pepe who has drifted forward this time, creating a height mismatch, and he attacks the cross with ferocity–only to see it hits the inside of the post and bouce back across the mouth of goal!

Overall, it’s a fantastic sequence illustrating Madrid’s tactics in this match: counter quickly and decisively into the space behind the Barça defense, particularly when the latter get caught forward out of position–and then look for service into danger areas, where odds are the height advantage will be in Madrid’s favor.