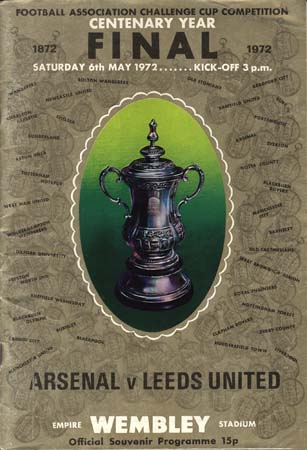 The two historied English clubs played earlier today, in a 3rd Round FA Cup matchup at the Emirates.  While today’s was an interesting match, their most famous FA Cup clash was on May 6, 1972 at Wembley–in the centenary FA Cup Final.  Leeds won 1-0 to win their 1st and only FA Cup.

Unlike today, when it would have been a major upset for Leeds to hang on for a victory against Arsenal, in 1972 they were perhaps the two strongest sides in English football.  Arsenal had pulled off the double the previous season, winning both the league and the FA Cup, with Leeds finishing 2nd in the 1970-71 First Division table–just a single point behind the Gunners.

It’s a game that’s well-documented online, by and for Leeds supporters; e.g., a Yorkshire Evening Post photo gallery which includes the front pages from the programmes of the match (left) and the May 8, 1972 special edition of the Evening Post (which includes pics of Leeds captain Billy Bremner receiving the Cup from Queen Elizabeth II and lifting the Cup above the squad):

It’s also a match well-documented on YouTube.  Indeed, you can watch the full match on this We-All-Love-Leeds.com page (video pulled in from steadandsid’s Leeds United Movie Files YouTube channel (his “About Me”: “Just an old football lad – Who’s glad he watched the team he did- at the grounds he did & in the era he did – Enjoying the crack with first class mates in a time before football sold it’s soul to the ‘Fools Gold’ greed of The Premier League complete with new wave happy clappy fan”).

Here is a highlight reel of the match–showing some very exciting football: