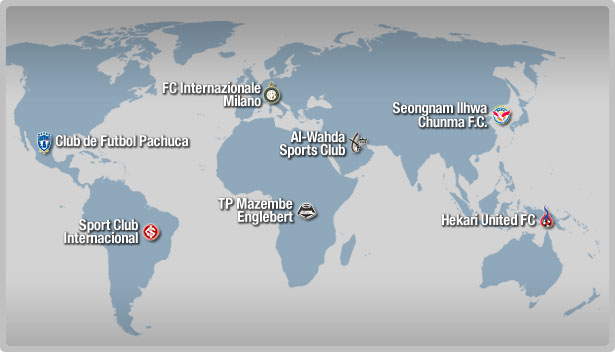 Hekkari are the first club outside of Australia or New Zealand to qualify; but they immediately fell to host side Al-Wahda in the qualifying round.  Al-Wahda went down to Asian champions Seongnam Ilhwa Chunma in the quarterfinals, and they in turn lost to Inter Milan in the semis.

The UEFA and CONMEBOL champions go straight into the semifinals–which no doubt has contributed to every previous final match being a UEFA vs CONMEBOL affair (see below).  But this year TP Mazembe made it to the finals by beating Pachuca and then Internacional.  See our lengthy post here on TP Mazembe and more on how they reached the final; see FIFA’s site for the full bracket of results leading up to the final.

Via Wikipedia, here are the details of how the seven clubs qualified–the six winners of the various Confederations’champions leagues plus Al-Wahda as winner of the host UAE’s league:

Also via Wikipedia, here are the results of the previous finals–showing that up until this year, it’s always been CONMEBOL v UEFA (other than the 2000 tournament, which included two Brazilian sides–the Vasco da Gama as Copa Libertadores winners and Corinthians as winners of the host domestic league; see this for why there were no competitions between 2000 and 2005):