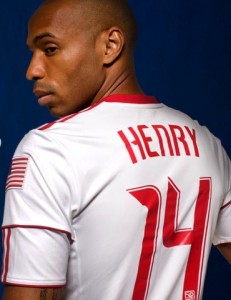 Not a surprise at all of course, but today being the first day MLS teams can act on the designated player rule, they’ve announced the acquisition of monsieur Henry this morning and stated that he’ll play in the friendly against Spurs on July 22nd. No need for too much rest since he didn’t see the field in the World Cup (I don’t remember him coming on, am I wrong here?) and he tended to ride the pine for Barca last season.

Still, Red Bulls are getting a quality striker with a few good years left in him, a fantastic touch and a mind for goal. I just like this guy, even though his ridiculously unsubtle handball during qualifying kept the much more worthy Irish out of the World Cup.

Easy with the promises there buddy, there are a lot of hungry young players who will be looking to make a name for themselves by beating the hell out of you:

“This marks an exciting new chapter in my career and life. It is an honor to play for the New York Red Bulls. I am fully aware of the team’s history and my sole goal during my time here is to help win the club its first championship. Knowing Red Bull’s significant commitment to soccer locally and internationally, I am confident that my teammates and I will succeed.”

CommentaryNewsThe AmericasUnited States An MLS Moment: What the Chivas USA Controversy Tells US About the State of US SoccerMarch 6, 2013 — by Ryan