Expect more deaths on March 9 in Egypt—both from judicial death sentences and the inevitable post-verdict riot—in the continuing fallout from the demise of the Hosni Mubarak regime in late January 2011 and the Port Said soccer stadium massacre in early February 2012 on its near-anniversary. On the second anniversary, the courts sentenced 21 to death for their part in the soccer stadium killings, which then sparked a riot that claimed 30. But let’s rewind a year.

After portside rival Al-Masry defeated Cairo’s most successful club Al-Ahly 3-1 in Port Said in February 2012, fans set upon one another with rocks, fireworks, broken bottles, knives and reportedly even swords. Or rather, the locals set upon the traveling Cairo support. According to the Egyptian interior minister, 13,000 Al-Masry fans attacked the approximately 1,200 Al-Ahly away fans. Al-Masry fans jumped a low fence, invaded the pitch and stadium lights went suddenly dark, turned off at the switch by the orchestrators of the massacre. Riot police chose to stand by as Al-Masry’s ultras attacked the hated opposition. The police did not intervene because a year earlier, the Al-Ahly ultras had formed a battle-tested enforcement core for protesters that supported the anti-Mubarak uprising in Tahrir Square and brought down the regime. This was payback. It happened so fast that Al-Ahly players were seen running for the locker room, but the Al-Ahly manager got caught in the fray. Al-Masry attackers detained and beat him until Al-Ahly supporters helped pull him loose. Al-Ahly goalkeeper Sharif Ikrami was also injured.

Actively allowed and encouraged by Egyptian police, the riot at the Al-Masry soccer stadium killed 74 and injured 1,000-plus—almost exclusively fans of Al-Ahly. A year gone, the fallout continues and the body count rises. Late January 2013, a judge sentenced 21 Al-Masry defendants to death, which reflexively caused another riot in which an angry group stormed the city jail and chaos spread throughout the city. In addition to 30 dead, close to 300 lay  injured. The police definitely broke out the truncheons this time. However, the court still hasn’t said its final word. The January ruling failed to address everything in one comprehensive verdict, so now the judge will announce the fates of the remaining defendants on March 9th, meaning more death sentences and more reaction-riot deaths in response. It has gone full family-feud Hatfield & McCoy, and it shows no signs of stopping.

The verdict and the riot did not occur in a vacuum. Al-Ahly ultras sing anti-police songs at matches, venting the hatred some Egyptians feel toward security forces that perpetrated the dirty work of Mubarak’s regime. The army and the police, even post-dictatorship, still call the shots. The court unwisely synchronized the verdict with the second anniversary of the revolt that ousted the former president. Since the revolt succeeded in part due to the muscle of Ah-Ahly ultras, the military and the police that backed Mubarak, himself a military man, had a score to settle. In Al-Masry fans, they found volunteers only too happy to serve as proxy enforcers.

Al-Ahly has won six African Champions League titles and 36 domestic league titles. That generates a fair amount of resentment alone, from a rival’s perspective. But incur the anger of the Egyptian military and expect bloodshed, post-haste.

At the Al-Ahly vs. Al-Masry match in February 2012, police apparently waived searches on Al-Masry fans and opened strategic doors to expedite passage for armed Al-Masry hooligans, who descended onto the pitch from the stands in swarms. The police conversely locked the doors of a narrow corridor that would have served as an exit for fleeing, unarmed Al-Ahly supporters. Fleeing fans didn’t merely find locked doors—the steel doors were welded shut. The fix was in. Al-Ahly would pay the price for having gone against the regime. Mubarak may have been dead and gone, but the lasting regime of the Egyptian army and its civilian police arm had unfinished business with the Al-Ahly ultras. Exacting their wrath through the incitement of others gave them the perfect alibi. Astoundingly, the manager of Al-Masry even told TV station ONTV, “This is not about soccer. This is bigger than that. This is a plot to topple the state.”

Fans trampled others pressed against the welded steel gate. Some suffocated, some got sliced up by the pursuing rival fans that trapped them. The scene of the massacre was literally a dead end. Except for Al Ahly fans that scrambled to the upper balconies of the stadium, where some jumped and more were pushed off. Hundreds of black-clad, helmeted stormtroopers with riot shields stood aside in a sort of at-ease formation and did nothing, almost as if following orders for a death sentence that hadn’t been officially announced—not announced to the Al-Ahly supporters, at any rate. 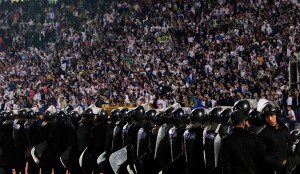 As antigovernment sentiment mounted in the 2011 leadup to the Arab Spring that kicked off with the revolution in Tunisia, a faction of Al-Ahly supporters—similar to the English hooligans and Italian ultras demonized by the international media—organized into a tactical unit called the Ultras Ahlawy. The natural cohesion of club loyalty made it a surprisingly crack paramilitary unit, which then joined forces with the fighter fans of Cairo club Zamalek SC, who self-identified as the Ultras White Knights.

When protesters occupied Cairo’s high-profile Tahrir Square to denounce Mubarak, the two ultra groups backed them, providing the muscle needed when defying a dictator and the military that kept him in power. They won, but as the stadium massacre shows, the victory did not come without casualties.

The deadliest event in Egyptian soccer history resulted in a death tally of 74 and over a thousand injured. Courts have thus far identified 21 defendants with guilty verdicts worthy of capital punishment. In the aftermath of the verdict, 30 more died. But the death designations are still not yet complete. By March 10, we’ll learn the next chapter. Few expect a happy ending.