As we posted to our tumblr yesterday morning, there were at least 10 international matches of interest yesterday, ranging from the Africa Cup of Nations semifinals in the morning, to a bunch of international friendlies in mid-afternoon, and capped off by the 1st three Hex matches.

Here’s a roundup of various match notes and observations from the CultFootball crew:

The two Africa Cup of Nations semifinals: I put on the first semifinal, Mali vs Nigeria, midway thru the 1st half, and quickly saw Nigeria go up 3-0 within the span of 20 minutes. Goals from (1) Elderson, assisted by Chelsea’s Victor Moses (no, Elderson is not a naturalized Nigerian originally from Brazil–his full name is Uwa Elderson Echiéjilé, born in Benin City, playing the last few years in Portugal for Sporting Braga (no, he’s not a naturalized Nigerian originally from Benin–Benin City is in Nigeria); (2) Ideye Aide Brown, a 24yo striker who plays for Dynamo Kyiv, assisted by Emmanuel Emenike; and (3) Emenike, another 24yo striker who also plays in far Eastern Europe, for Spartak Moscow.  Nigeria made it 4-0 via a goal from yet another young striker playing in Russia, Ahmed Musa (20yo, CSKA Moscow). Mali pulled one back in the second half, but their inspirational run ended emphatically.

The second semifinal was a huge upset. The conventional wisdom is that the final would be a clash between two West African powers, Nigeria and Ghana. But instead West African minnow Burkina Faso pulled off the shocker, beating the star-studded Black Stars of Ghana. Ghana scored an early 13′ goal off a PK, but couldn’t add to their lead.  Burkina Faso’s striker Aristide Bancé equalized in the 2nd half (born apparently in Abidjan, Côte d’Ivoire, but moved with his family to Burkina Faso as a child; now playing for Bundesliga minnows FC Augsburg). Burkina Faso then held off Ghana’s attack through extra time, and won the match in penalties.  This match report cites a couple missed chanced by Asamoah Gyan in particular, although Jonathan Wilson’s match report highlights another unfortunate aspect of the match: “Refereeing errors threaten to overshadow Burkina Faso’s dramatic win over Ghana”

The Burkina Faso-Nigerian final will take place on Sunday in Johannesburg, at 8pm local time (1pmET), and will be available for viewing via ESPN3.com.

Here are Coach Larry’s observations on Spain’s 3-1 victory over Uruguay:

The match took place in Doha, Qatar at (Wiz?) Khalifa international stadium. pretty sure hex match will have same commentators as BeIN uses the remote setup. Color guy is German but I don’t know who. Then the play by play called him Bodo, and he praised a Victor Valdes distribution, so it’s Bodo Illgner.

No Xavi, no Xabi Alonso. Cesc as false nine, so no Fernando Torres nor David Villa nor Fernando Llorente. Chelsea’s Cesar Azpilicueta wide right with plenty of room as Uruguay started out shading to other side against Jordi Alba, Juan Mata, Santi Cazorla, and Pedro.

Uruguay was all counter attack at the beginning.  Cesc scored in the 16′ on a long range shot right through Uruguayan goalkeeper Fernando Muslera‘s hands. A little swerve to it, but Muslera [now with Galatasaray, previously with Lazio] should have held it.

A wrong offside decision in the 29’ denied Spain a 2-0 lead, and denied Carlos Puyol a goal to cap off his 100th Spain cap. Spain played a short corner, which was then played back to 8-10 yards off the near corner. Ball was swung in across three face of goal, maybe a flick but volleyed by a wide open Puyol, who was called offsides.

Spain then lost some concentration, Uruguay appealed for a penalty which was denied, but Spain’s organization broke down and Uruguay found a through ball to the top of the box, spin over turn and slid home by Cristian Rodríguez. [Rodriguez came up with Peñarol, played at PSG and Porto before moving last summer to Atletico Madrid].

They honored Puyol for his hundredth cap with a montage and halftime ceremony. Looking forward to his future as a Bond villain.  Plus Sergio Ramos and Torres look very twin-ish with the haircuts.

The second half started wide open. Both teams were stretched and attacked more quickly. Spain attacked down their left, Uruguay snuffed it out but lost it right away in the transition to Pique (who had come on for Puyol). Pique slid in a ball for Pedro, who converted with a slide rule to the far post (51′).

Jordi Alba is bit of a punk. could have had three yellows in one sequence.

Cavani could have converted one but decent save from Valdes.

Multiple subs for Spain through the 2nd half: Malaga’s young star Isco on for Iniesta; David Villa on for Juan Mata; Cazorla exited for debutante Mario Suarez [another Atlético midfielder–in fact, born in a Madrid suburb and a product of their youth system]; Arsenal’s new arrival Nacho Monreal on for Jordi Alba.

Elder statesman Diego Forlan on for Cavani with 20′ to play.

[Larry’s notes ended there. Spain added an insurance goal in 74′, with Pedro getting his 2nd. Via goal.com’s mbm:

SPAIN LEAD 3-1!!! PEDRO WITH HIS SECOND OF THE EVENING!! La Roja launch a blistering counter attack through the Barca trio of Cesc, Villa and Pedro, with the latter of the three prodding the ball home from close range after neat build-up play from the other two.]

Video of that Spain 3 – 1 Uruguay match:
Three interesting intra-European matches took place concurrently, at the traditional (western) European  kickoff time of 2:45pm: England-Brazil at Wembley, France-Germany at the Stade de France, and Netherlands-Italy at the Amsterdam Arena.
Check back here for notes on those, as well as the Hex matches: the USMNT’s demoralizing loss in Honduras, Costa Rica battling back to salvage a draw in Panama City, and Mexico listless performance/Jamaica’s suprising performace at the Estadio Azteca. 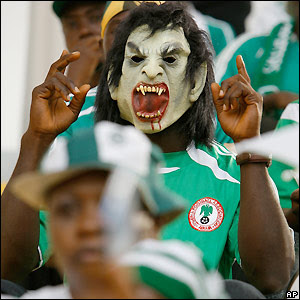 Nigeria were plainly disappointing in World Cup play. Now their president has stepped in to stop all play for the next two years. Ballsy move!

Goodluck Jonathan, the apparently ill-named president of Nigeria, has suspended his country’s national soccer team from international competition for two years after its poor performance in the World Cup in June.

They haven’t won a World Cup match since 1998, and President Jonathan has had enough. Investigations will be held!

Argentina dominates the group, winning all 3 of its matches.  South Korea finishes in 2nd place with 1 win, 1 draw, 1 loss.

This one is for all the marbles. If Korea win, they go through. If Argentina win, and Korea tie, Korea go through. We’re pro Korea here (that’s South Korea, obviously) — be the Reds! There are a couple other situations where Korea can advance to the knockout stages, but it’s all academic. They need to win against the Super Turkeys…I mean Eagles.

In the other match, Argentina promise to turn on the style, and probably rest some of their players against a Greek side that hasn’t looked strong enough to move beyond the group, let alone beat what may very well be the tournament’s eventual winners.

All the fun after the bump!