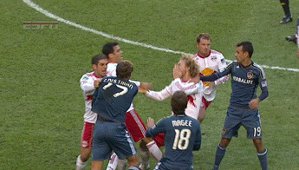 The L.A. Galaxy takes to the pitch Thursday night at home (11 p.m. ET, ESPN2) with a one-goal lead in the second leg of the MLS Western Conference semi-finals, having beaten the New York Red Bulls 1-0 in New Jersey on Sunday.

One might ask why an Eastern seaboard team finds itself in the Western conference side of the playoffs. The reason’s too long and too boring to go into. (In briefest explanation, New York won a 2-0 Wild Card round victory against FC Dallas the previous Wednesday.)

Mike Magee scored the lone goal against his former club, meaning the Red Bulls must win by a scoreline of 2-0, 3-1, etc. in order to progress outright. (Scoring, as with the Champions League, is done on aggregate.) Alternately, they must win by one in regular time, which would force 30 minutes of overtime. If still level on aggregate at 120 minutes, the team that shoots penalties best wins.

With a one-goal lead, Los Angeles can play for a tie at home and advance. Unfortunately for New York, no team has defeated the Galaxy at home this season, due largely to defensive stalwarts Omar Gonzalez and A.J. DeLaGarza. The Galaxy has won 8 straight at home, kept 10 clean sheets and outscored its opponents 28-8 in 2011. Unbeaten in 18 straight regular-season home games overall, Los Angeles enjoys the fourth-longest home record streak in the history of the MLS.

The Red Bulls trailed the Galaxy by 21 points and nine places in the standings at end of regular season. Were Kansas City to be adjudged “Western,” the Eastern Conference leader would have slotted in at fifth in the Western conference. It calls into question the legitimacy of having separate conferences, with one so far superior to the other. For now, however, it’s the system in place.

In the first leg, English superstar David Beckham, 36, in the fifth and final year of his MLS contract, served up a perfectly looped assist with pinpoint delivery for Magee to nab the match winner. Beckham finished second in the league with 15 assists and finds himself in realistic contention for league MVP. As does Landon Donovan, who scored 12 goals (tied for fifth in MLS) and holds the record as all-time highest goal scorer in MLS postseason. The Beckham Experiment may just conclude with an MLS Cup trophy, after all.

However, as long as Thierry Henry can walk and kick a ball, it’s unwise to entirely count out the Red Bulls. He played tenaciously on Sunday, a bit overly aggressively, even, and his leap into the air for a powerful bicycle kick showed him a 34-year-old with yet more gas in the tank. At 14 goals, he racked up the league’s third highest goal tally in the regular season, and his strike in the match against Dallas helped book a spot in the conference semi-finals.

Recent absentees Donovan and former Spurs man Robbie Keane (or, Roibeárd Ó Catháin, for those who speak Irish) have returned from injury, recovering from a quad strain and adductor injury, respectively. Both look likely to start Thursday, having suffered no setbacks in the first leg. Red Bulls managed to contain and shut them down on Sunday. They’ll likely need an encore performance to have any hope of progressing.

Goalie Josh Saunders notched his ninth shutout in 19 matches this season for the Galaxy, who lost 2-1 to the RBNY earlier this month at the Red Bull Arena. The Red Bulls need goals, but Saunders and the L.A. back four don’t often concede.

The defensive story on the New York side reads quite differently. Confusion over Keane and/or Magee being offside in the 14th minute of the first leg played a not insignificant part in the goal. And central defender Tim Ream dubiously tried to out-Terry John Terry, tripping himself up and faceplanting into the ragged pitch a day after the Chelsea captain’s farcical rendition in England. As for transfer rumors linking Ream to Arsenal, West Brom or Everton, even aside from the klutzy faceplant act, the Red Bulls conceded the most goals (53) in the league this season. Hardly compelling credentials.

The commentators made a meal of Henry facing Keane for the first time since Henry’s double handball denied Ireland the 2010 World Cup by setting up a William Gallas goal, but they predicted the wrong scufflers on that one.

Instead, a postmatch melee erupted at the final whistle involving the Galaxy’s Donovan (alleged trash talker), Adam Cristman (shover) and Brazilian midfielder Juninho (face elbower) against Mexican defender Rafael Márquez (ball thrower, puncher and Academy Award hopeful) and defender Stephen Keel (face elbowee) from Red Bulls. Donovan may or may not have said something snipish to Márquez, who grabbed the game ball and fired it at Donovan’s leg. Bodies closed in, Cristman shoved Marquez, who retaliated with a punch, later falling down from a phantom air blow. Juninho, meanwhile, delivered an actual punch to Stephen Keel’s face. Márquez and Juninho both earned red cards and now miss out on Thursday’s match.

Juninho’s lone goal against Honduran club Motagua fired the Galaxy into the CONCACAF Champions League quarterfinals in March 2012. The Galaxy will face one of Salvadorian club Isidro Metapan, Seattle Sounders or Toronto FC. The loss of Juninho, on loan from São Paulo, in the current match presents L.A. with a selection headache, while many in the Red Bulls fanbase see the erratic Márquez missing out as a plus.

Real Salt Lake awaits in the Western Conference finals, having sealed a 3-2 aggregate win over Seattle Sounders, who went into last night’s second leg with a three goal deficit. Both teams shut each other out on home soil, but Salt Lake’s 2-0 victory last night fell just short of forcing extra time.

As I watched the nearly sold-out USA v Brazil game, I was reminded of thoughts I’d had while watching the sold-out Red Bulls v Galaxy matchup: New Yorkers don’t know how to get to a soccer game on time. It’s obvious when you tune in to watch on TV and see over half the stadium empty for the first 15-20 mins. But don’t blame the fans entirely. Baseball, (American) Football, Basketball—our homespun sports are very forgiving to the tardy and have surely created a mindset that simply isn’t applicable to the footy.

I can’t be bothered to look up the actual statistics, but I imagine baseball games average 3 hours. Football always seems to take four, but I’m usually watching at home (pre&post-game etc.). Basketball seems like it moves along more quickly, but there’s still plenty of breaks in play to get up and refresh a drink or grab a bite.

Soccer isn’t like this at all. You can’t be fifteen minutes late for soccer, because then you’ve missed nearly 17% of the game, and it’s not coming back. You can barely get up at halftime to grab a drink before the play is back on. And I don’t know about you, but unless I have a beer somewhere within reach I’m not completely enjoying myself at a professional sporting event. 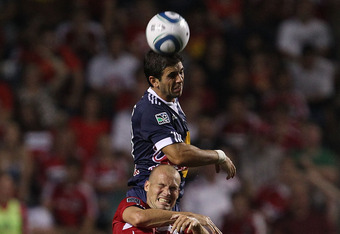