The first of four meetings between these sides produced a magnificent game, but it was always going to be about how Madrid responded to Barcelona. It’s a shame then that Madrid were brought down to ten men and we didn’t see the fullness of Mounrinho’s second-half tactical shift.

Jose deployed a new formation yesterday evening, placing a tight triangle made from two defense midfielders and a center back smack in the middle of Barcelona’s attack. Alonso, Khedira and Pepe–yes, Pepe–rotated defensive and attacking duties amongst themselves, working in tandem to break up the passing game from Iniesta and Xavi, and when they won the ball one of them would spring forward into the attack. Very often it was Pepe, and though it seemed odd at first to see the holding back pushing into the opposing side’s penalty box, it soon became evident that the Portugese was the most dangerous man on the pitch.

Barcelona only once pulled their collapse and expand tactic (where they bring three players in attack close together, then one-touch to each other to lure in defenders before turning or passing beyond their now condensed markers) – usually reserved for moments when the defending team are hesitant to leave their defensive zones. This unique moment in the match speaks precisely to the way Madrid disrupted Barça’s usual attack. The visitors were allowed no time on the ball, and almost always forced to move the ball laterally or backwards. Their chances were rare while Madrid attempted to counter through their speedy wingers.

There were contentious moments of course. Adriano’s yellow in the 9th minute was very soft, and considering he was tasked with containing Ronaldo he’d have to be careful not to pick up a second. Villa went down in what could have been a penalty, though in replay it did look like he dragged his feet and went over before the Casillas made any bit of contact. But Albiol’s red was certainly justified after dragging down Villa in the box – the end of an odd play actually, as it’s rare to see Barça send a long ball up and over the defense, and the bounce found the Madrid defender out of position.

For forty minutes Madrid had to play a man and goal down, and it didn’t seem like they had a chance to come back. But it did feel like Mourinho had planned to lock down the defense before unleashing the team toward the end of the game, and it may have been more a matter of sticking to the game plan than responding to the losing position that caused him to bring on his German playmaker Özil. His addition plus the removal of Alonso for Adebayor injected a bit of danger into the Madrid attack, and even with ten men they started bringing the game to the champions.

In the 81st minute Madrid were given a lifeline, and just maybe they deserved it for the effort they put into the game (and for having had a ball cleared off the line and one struck against the post). They certainly deserved it for the foul, though on first look it didn’t seem to have been much – on closer inspection Alves clearly took out the trailing leg of Marcello. Ronaldo converted as Messi had done from the spot at the other end of the pitch, and 10 mintues of subsequent frantic attacking from both sides produced a number of chances that could’ve spelled heartbreak for either side.

Now the question remains, how will this game effect the meeting between the sides on Wednesday? Were the choices of players and tactics preferred considered just for this 90 minutes, or were there deeper, longer lasting ploys in effect? We can’t wait to see!

Firstly, from the Xavi interview, speaking about Spain, but easily parallels Barça:

“Paraguay? What did they do? Built a spectacularly good defensive system and waited for chances – from dead balls. Up it goes, rebound, loose ball. It’s harder than people realise when you’ve got a guy behind you who’s two metres tall and right on top of you.” 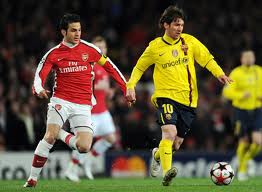 I think we all know that Arsenal totally incapable of playing like Paraguay.  Also from Xavi: “But now I see Arsenal and Villarreal and they play like us.” That said, certainly Wilshere’s remarks about “getting nasty” indicate a plan, though Xavi suggests an alternate route, “Yes, but this year they’re much better. I think it’s a disadvantage for us that we played last year. They had [too] much respect for us. It was as if they let us have the ball.” So keeping the ball, Arsenal’s preferred routine in Engerland, would do them better according to one of their opponent’s key players.

Koscielny and Djourou will have their hands full with Pedro and Villa, but the Gunners must rely on those two as Song, Wilshere, and even Fabregas must neutralize the trinity of Xavi, Iniesta, and Messi. Clichy, of course, must await Alves at his front. Arsenal should consider assigning Wilshere to Messi always and everywhere. Now if Pique decides to get in the mix from the back, van Persie will struggle to help, but at least that places the ball much farther back in the formation. Little will matter if Arsenal’s third-string keeper can’t handle free kicks.

Barça’s shape does provide some opportunity. Sagna must take every chance to get forward and exploit the absence of a true winger on that side. Naturally, this will help push Arshavin forward to provide a link and partner to RvP. What, isn’t that Walcott’s side? Well, certainly, the two have switched flanks, allowing Walcott all the room Alves has vacated, particularly if Wilshere and Song can lay some longer diagonals in front of him.

Should be an interesting match despite every commentator essentially writing off Arsenal since the draw.

(Fox Deportes is actually going to rebroadcast the Barcelona-Estudiantes game this afternoon at 5pmET–ahead of their broadcast of Inter-TP Mazembe tomorrow at 12pmET.  But if you don’t get to watch the rebroadcast, see below for a 6min highlight clip.)

It was a rather exciting game, as Estudiantes took the lead in the 37th minute off a fantastic header by Mauro Boselli. But Pedro pulled Barcelona even in the 89th minute–Pique had moved up into attack, and won a head ball that Pedro nicely finished, also with his head.  And then Messi, as he tends to do, scored with spectacular fashion and timing–somehow getting behind Estudiantes’ defenders and headed in the winning goal with 10 minutes remaining in extra time.

Rivalries are a really, really important part of the fun of soccer and many other sports.

Rival players are special, not quite in the same way as players for our favorite teams, but still special. We’re likely to remember even relatively forgettable players who participated in one or more important games we remember, or even associate the name of a player with memories of the time when he or she played for a rival team.

Yes, I did. And I will have a lot more to say about women’s soccer in this post and in the future.

Let’s hope today’s second match proves to be a little more balanced than that last display. Argentina are among the favorites to lift the Cup, though they looked a shambles in qualifying with Maradona continuing to sully his iconic reputation (because up ’til now he’s been the poster boy for responsible sanity).

Mexico have been impressive as well, and though they are sure to be outclassed in the midfield, they possess a dangerous attacking duo in Dos Santos and Vela, and Salcido in back has been great getting forward and creating chances from the wings.

Argentina are dripping with quality, with Messi the obvious standout. But they can score from anywhere on the pitch, and with strikers like Inter’s Milito on the bench (Tevez and get the starts up front, with Messi in an attacking midfield position just behind them), Maradona has an abundance of options should one not be firing on all cylinders today.

It’s an open thread again (we like to save the liveblog action for the workdays), so please make some noise with your comments!