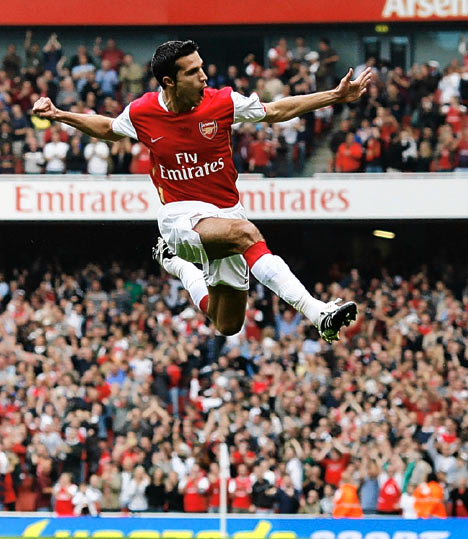 Arsenal travels to West London for the early match on Saturday to face off against Chelsea at Stamford Bridge (7:30AM EST on ESPN2). It’s the sternest test since the desperately needed improvement of late, and the result will reveal whether the team has finally shaken the pernicious monkey off its back or if the Red and Whites really are a defensive shambles with only one dependable goalscorer.

It’s not a make-or-break match, per se, but the result carries more weight than simply three points. Arsenal has finally cobbled together a string of results in the league, in Europe and most recently in the Carling Cup, but all that could soon come to a screeching halt. Most people are expecting to hear that ear-splitting screech. However, if Arsenal can emerge with a draw or perhaps lose but put in a convincing performance, things really could be looking up. A win would cause half of North London to flip out, undoubtedly, but at some point one needs to be realistic.

To start with the positives, Arsenal top their Champions League group at the midway point and have only Olympiakos away, with Dortmund and Marseille set to travel to the Emirates, where Arsenal has racked up the majority of its wins. The team has clawed its way to seventh place after an abysmal start to the season (1-1-3). Robin van Persie is still far and away to go-to man for goals, but Gervinho, Aaron Ramsey and Andrey Arshavin have started scoring a few themselves, in addition to some excellent assists. Gervinho played an outstanding match against Stoke, involved in all three goals, scoring the first off an incredible chip from Ramsey. Meanwhile, many positives emerged in the 2-1 Carling Cup win over Bolton on Tuesday. Of which more right now.

For starters, Thomas Vermaelen captained the side on his long-awaited return. Steely-eyed and solid as ever, he commanded his area as if he never left. His recovery means that all the center halves are again fit. It’s surreal to even write that. As any statistician knows, the last time Arsenal had all its center halves fit is a month and year that does not translate in modern alphanumerics. Heady times. Even backup center halves Ignasi Miquel and Sébastien Squillaci are fit (both of whom played Tuesday, and Squillaci wasn’t even half bad for once).

After the match, news broke that Vermaelen may have suffered a calf injury. Cue Bacary Sagna leg-break despair. But then he declared himself fit again (rejoice!), which could put him in the frame for Chelsea. One would forecast the bench as his most likely destination, with the Mertesacker-Koscielny axis in good working order at present, and rested. But Vermaelen is our best defender, and Chelsea away is when you’d like to have your best defenders. It would also free up Laurent Koscielny for right back. Wenger definitely has some decisions to make.

You’d have never known Chelsea were having a rough run of form with the way they turned around what looked to be a losing outing today. Statistics suggest they were producing more chances and even controlling the game, but the reality was that they were lucky to get out of the first half only a goal down.

United looked bright up top, and Chicarito, preferred to Berbatov at the start, was linking well with Rooney and Nani up the left (Fletcher on the right saw almost none of the ball in the opening period). On fifteen minutes United created a wonderful chance. The little Mexican pea turned well with the ball before sliding through Chelsea’s center and feeding an overlapping Evra, only for the Frenchman to play a ball just slightly in front of an onrushing Rooney unmarked inside the six.

Manchester continued to work up their left, while Chelsea were hampered in attack by their narrow formation. Ramires was working well enough on the right, but was locked in battle with Nani and Evra, and only when Anelka would move into the corner ahead of him did Chelsea find a way to get the ball into a crossing position. Malouda was constantly drifting inside and receiving the ball where Lampard might have been better placed. Though he had plenty of space to his left, and surely has a step on O’Shea sat in United’s right back, the French Guinean continuously tried to force the ball through the center of the defense.

Ferguson’s charges were first to strike, a revitalized Rooney working in tight space with Nani again from the left. David Luiz, the big Brazilian centerback who looks to be Chelsea’s best signing in some time, had been managing Rooney very well up to that point, but on the goal he was separated from his mark when Nani went past Ibramovic, forcing the Brazilian to readjust. Ibramovic, who had been holding his own against Nani, simply didn’t step quickly enough to his new assignment, leaving Rooney time to line up his shot and blast home from just outside the box. 1-0 to United and Chelsea didn’t look like they had a way back. The odd man in there seems to Asamoah Gyan.  Don’t get us wrong, we were impressed by Baby Jet performances this summer in Africa (this one against the USMNT in the World Cup of course–but also this more recent performance)–but he hasn’t accomplished what the other players on the list have.  (Özil and Müller are two even younger players that one might argue about–but those two have already impressed and achieved more for both club and country than Gyan has.)

There’s more to the Balon d’Or than just the men’s player award however.  The shortlists for the other three categories:

Thanks to our very own Blues supporter Sumit Sasidharan for this surprisingly fair & balanced evaluation of Chelsea’s latest victory, over London rivals Arsenal (with video highlights of the match embedded below Sumit’s comments):

That was the best match all week. Tempo, width, muscle and touch on display–exciting.

Drogba’s touch seems better than ever. I was more surprised by Gunner lack of possession by their big men; Diaby and Song failed to exert the kind of muscle that could’ve been the edge.

After reading the beebs’ and guardian reports on the game and listening to Wenger, must’ve been a different game than I was watching. It really felt pretty even. Both sides had chances and possession seemed pretty even. A. Cole’s goal should’ve made the margin 3 and Anelka’s 4.

Instead of the past two beatings, Arsenal seemed to have clawed their way to an even showing but the reality is goals decide the difference. Wenger’s been the best coach in the EPL for a long while but he’s got to stop putting kids out there. I love his approach to the game and the way his team plays but that place looks like an ER.

Blues in front by 4 points seven games in.

What does everyone think of Obi Jon Mikelobi for the newest line of Michelob?

We here at CultFootball have been kicking around the idea of doing a series of post focusing on African football: its players, its nations, its history, its future.

For a quick start, note that today’s highly anticipated Premier League clash between Arsenal and Chelsea will prominently feature a number of African players:

Didier Drogba (Ivory Coast) and Michael Essien (Ghana) are among Chelsea’s stars, and keys to their success; John Miel Obi (Nigeria) is also starting today, while Salomon Kalou (also Ivory Coast) may come off the bench.

Arsenal’s Bacary Song and Abou Diaby are both of French nationality, but are of Senegalese and Ivorian descent, respectively. Emmanuel Eboué is also Ivorian, while Alex Song is Cameroonian. Both Samir Nasri and Marouane Chamakh were born in France but of North African descent (Algerian and Moroccan, respectively)–Nasri has chosen to play the French national team, while Chamakh opted for Morocco.