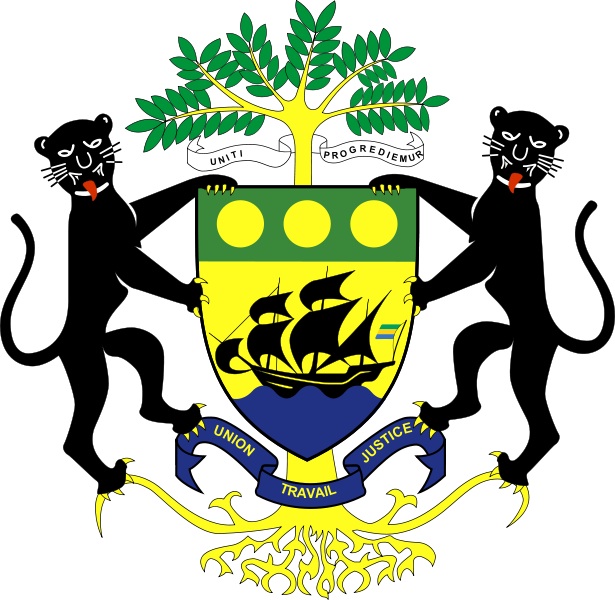 African Cup of Nations (Group C), Gabon vs Tunisia (1pmET, Al-Jazeera Sports / Eurosport International):Tunisia and tournament co-host Gabon both won their first two group games and hence will advance to the final eight (while the other two teams in the group, Niger and disappointing Morocco, will go home). So might as well take a look at two teams that we’ll see in the quarterfinals, as they play for top of the group:

[Update: this match has been postponed due to heavy snow!] Italy (Serie A), Parma vs Juventus (2:45pmET, ESPN3.com or foxsoccer.tv in US): Juventus still topping the table, in pole position as the race for the Scudetto enters the home stretch.  We wrote this last month re La Vecchia Signora (The Grand Old Lady, as Juve is called in Italy) ahead of their match with Udinese [with annotations in brackets]:

Juventus is perhaps even more surprising [than Udinese]–still undefeated in the league (9W 6D 0L) [in fact, still undefeated! 12W 8D 0L].  We finally got to watch Juve play (thanks to the fact we flew cross-country on JetBlue, and so were captive with GolTV for 10 hours), specifically the rather dramatic Coppa Italia match they played against Bologna.  Players to watch on Juve: holding midfielder and Milan transplant Andrea Pirlo,  Claudio Marchisio, Paraguayan Marcelo Estigarribia, ageless trequartista Alessandro del Piero; we also like to see Dutchman Eljero Elia, whose been somewhat lost in the shuffle since coming over from Hamburg in August.

We don’t know much about Parma, who are mid-table (11th place); here’s what livesoccertv’s preview has to say:

Parma are likely to be stiff opposition, as since their humiliating 5-0 defeat to Inter Milan at the San Siro in early January they have gone unbeaten in three successive league games, with a 3-1 home victory over Siena and two away draws against Bologna and Catania, respectively.

Furthermore, their home record is quite impressive, with five wins, three draws and a mere two losses in ten games. But in order for Parma to obtain a positive result, much depends on the form of former Juve striker Sebastian Giovinco.

The diminutive 25-year-old has scored four goals in his last three games against his former club and will be hoping to convert once again in order to boost his teams chances of causing an upset.

“Giovinco is the star and we know him well,” Giorgio Chiellini, the wary Juve defender, stated in reference to the talented striker, who incidentally scored Parma’s only goal in the 4-1 defeat to Juventus in September.

England (Premier League), Everton vs Manchester City (3pmET, Fox Deportes and FSC in US) or Manchester United vs Stoke City (also 3pET, ESPN Deportes, ESPN2, ESPN3.com in US): It’s come down to the two Manchester teams at the top of the Premier League table–City on top with 58pts, ManU on 51.  With the results a week ago Sunday, they’ve put some distance between them and the rest of the pack (Tottenham is 3rd with 46, Chelsea 5th with 41).

Pick whichever Mancunian side you prefer to watch.  The Everton-ManCity match (which like Parma-Juve is a case of the league-leaders going playing away against an erractic mid-table side) has the added attraction of American Landon Donovan, who’s not long on loan and on display in the Premier League. –Everton are 14th in the league, but they’re coming off a big 2-1 win Friday against Fulham in the FA Cup (with Donovan assisting both goals from his right wing position).

MU-Stoke is a closer matchup in terms of the table–Stoke sits in 8th, just 4 points behind Liverpool (and 5pts behind Newcastle and Arsenal, both of whom have 36pts).  But we really don’t have anything to say about what to watch w.r.t. Stoke.

Spain (Copa del Rey semifinal – 1st leg), CD Mirandés vs Athletic Bilbao (4pmET, no US TV): The Spanish clubs turn right around after playing out their quarterfinal ties last week for semifinal first legs this week.  The more high-profile match is tomorrow (Valencia vs Barcelona), and given this is a mismatch on paper–Mirandés plays in Segunda División B (i.e., 3rd division, below La Liga and Segunda División A), and so Athletic, one of the great clubs of Spain, is heavily favored to advance to the final.  Nevertheless, we try to watch Bilbao play whenever possible, given their Bielsan philosophy.  Here is what we wrote in November, ahead of their match against Barcelona:

Athletic Bilbao–the Basque team which aspires to be one of the “alternatives” to the Barcelona/Madrid axis of hegemony in La Liga, which is newly managed by a crazy genius Argentine whom Pep Guardiola considers one of his managerial inspirations–to whose house in Argentina Guardiola made a pilgrimage when he was considering a career as a manager.

His name is Marcelo Bielsa, his arrival in Bilbao was highly anticipated, and his tenure there started terribly: two draws and three losses in their first five league matches. But they started to turn it around at the beginning of October, which prompted both of the Guardian’s cerebral football columnists Sid Lowe and Jonathan Wilson to devote columns to Bilbao under Bielsa. 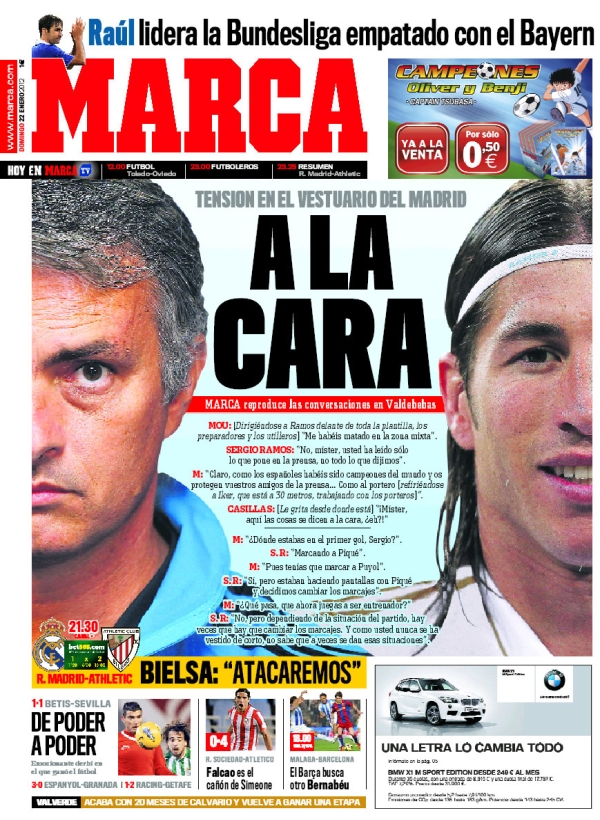 Less than a week after their hard fought tie in league play, Madrid and Barça met in the final of the King’s Cup. Mourinho sent his defensive set into the midfield again, then put in Özil from the start for an added touch of creativity in attack, and sprinkled the whole side with an extra dose of aggression dust.

The force of Madrid’s tackling and their quickness in closing down the Barça players immediately unstabilized the usually unflappable Blaugrana. On the strength of their defense and their quick counter attack, Madrid had far the better of the first half. Pepe seemed to be everywhere and Ronaldo did very well as the lone striker up top (even with Mascherano shadowing his every move). The game moved quickly up and down the pitch, but Barcelona weren’t finding any joy past the midfield circle and it wasn’t until nearly the 40th minute that they finally caused an overload close to goal (the chance fizzled without them manufacturing a shot).

Their one foray aside, Barcelona were lucky to get to the halftime whistle tied at zeroes, especially after Pepe’s towering header above Dani Alves smashed against the inside post and deflected at an agonizing angle across the goal mouth.

The second half was a different game entirely. Barcelona were rejuvenated by whatever spanking Pep Guardiola gave them in the dressing room, and they came out with the sort of belly fire you expect from the best team of their generation. Suddenly the game was stretched (in part because Madrid were pushing more into attack, but also because Xavi and Pedro were drawing out Pepe and Khedira more successfully) leaving Iniesta room to move through the middle.

It was in fact Iniesta who turned the game in Barça’s favor. In the first half, the playmaker forced passes into Messi and Villa only to find them sitting inside a trap. In the second half the tiny balding Spaniard held the ball and ran past the first defensive line of Madrid, then worked in closer proximity to his strikers so they could work the tiki taka. As soon as they found their rhythm the counter attack of Madrid started to look more like desperate clearing rather than pointed reply.

If not for Iker Casillas, Barça would have gone ahead in the second half, and considering the state of Madrid at the time they would probably not have found a way back. Spain’s number one tapped away a lovely chipped ball by Pedro and pushed aside an Iniesta strike destined for the corner.

It looked as if the game would head for extra time, until Madrid managed an odd man rush at the very end of the 90 minutes and di María found himself free to test Pinto from just outside the box. Valdés’s stand-in managed to palm the floating attempt above the bar and it was onto the next 30 minutes. More of the same for the most part. Hard tackling from Madrid but Barcelona with better control, though the chances had dried up.

Then just past the 100 minute mark Madrid found their way through the center of the pitch by way of another Pepe tackle. Marcelo swung the ball out to di María who got a toe in front of Alves to lift a far-side cross to the slicked head of Cristiano Ronaldo. The glistening head of the Portugese directed the ball past the unbalanced Pinto — Madrid 1 – 0 Barcelona.

Substitutions were made by both sides in the final fifteen minutes, but the score remained the same, and Real Madrid walked away with their first Copa del Rey in eighteen years. Then, Sergio Ramos dropped it under the party bus on the way back from the airport…