March has not been kind to the spiky-haired kid from Sugar Land, Texas (by way of Aberdeen). When with Sunderland on trial he was attacked outside a pub and had his eye socket fractured (March 12). Last season, with Bolton and primed to play a big role in South Africa for the US, he had his leg broken by De Jong in a friendly against Holland (March 3). And now his most serious injury just last weekend, when United’s Evans came in high and took out the poor bastard’s knee.

How bad is it? Nobody knows yet. There was a nasty gash and he needed some 26 stitches to close the wound. His teammates were certainly disturbed, and it was said that the knee was “opened”, which could only mean you could see bone. Now without any official word on what the problem is exactly, the midfielder has been ruled out for six months, just as Bolton were making a strong challenge for a spot in Europe.

A firm starter for Owen Coyle’s side, the American has been a tough tackler and can also get forward in attack. He has been consistently calm with the ball all season long, making intelligent passes out of the backfield and scoring some really lovely goals when arriving late in the box. A hard worker, you wouldn’t expect him to have shied away from a challenge. Unfortunately this one came off twisted and he’ll be watching from the sidelines until next season. 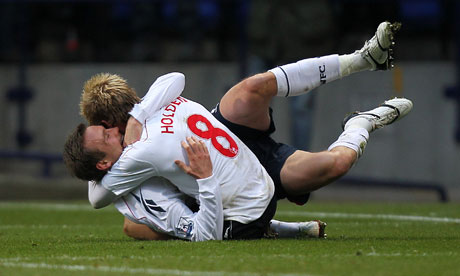 US national team midfielder Stuart Holden (who currently holds first position for tackles won in the EPL) scored a dramatic late winner for Bolton Wanderers on Sunday upon his return from a thigh injury. The prolific twitterer (@stuholden) has become a fixture in Owen Coyle’s side, and though Bolton had gone down to ten men Holden continued to attack, turning a chested trap into a powerful one-time volley that slid in at the near post.

Fat Sam, having seen his team level with two minutes left and up a man, was more than displeased after the match, calling his squad a bunch of old women. Asked if he was sick from the result, he responded:

“Sick is an understatement. We defended like a bunch of old women. I’m sick they went down to 10 men, because, with 11, I thought we were going to go on and win it.”

Bolton have surpassed all expectations this season both in style and points earned. They’ve played a pleasing brand of football, and now sit six in the table with a +6 goal difference.