[Editor’s note: On the eve of Sporting KC’s expected destruction of Manchester City in a stateside friendly–booo, Nasri!!!!–Cameron Garrison, rabid SKC and AFC supporter, weighs in on his unbelievable happiness at USMNT Brazil 2014 standouts Matt Besler and Graham Zusi rejecting offers from England and abroad and staying put at the home of the MLS champions. Loyalty isn’t dead, the legacy is only beginning.]

So, Saturday.  What an AMAZING day for Kansas City and soccer in Kansas City.  It’s really difficult to overstate just how big Saturday was.  We have been fortunate to have a number of fantastic players during this 4-year run.  Many have moved on. Many have stayed. And we have been so successful because Vermes is so brilliant at replacing those that have gone.

But through it all, these two were THE guys. They were the heart and soul of the whole thing. Always.  As the WC approached, I was equal parts thrilled and terrified.  I knew that if they played well, we would probably lose them.  But I also knew that, if that happened,  I would be so proud to see them go.   They *are* SKC. 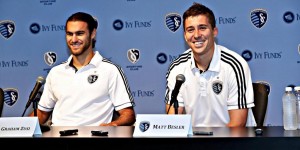 Then it happened. One played pretty well that first match  but had to leave at half because of a hamstring.  The other didn’t start, but he came on, they let him take the set pieces,  and he perfectly delivered the corner that Brooks turned into maybe the second or third most famous USMNT goal ever. The next game brought a masterpiece against Ronaldo, another assist, and I knew the dreams and nightmares were coming true. It was after Portugal that I first told myself that one, and likely both, were leaving. The next two games just reinforced that. When Brazil was over, I was SURE one was gone, and assumed the other was too.  I was already trying to mentally move on.

Then it kept dragging on more and more, and I allowed myself to dream a bit. But just a bit. It wasn’t until this past week that I began to think there was even a chance. And then on Saturday it happened:

IT HAPPENED. They’re staying!!! With all those options in front of them, they chose to stay and keep this going. Out of all the choices, they chose to try and win ring after ring at Sporting Park.  This thing that has been so amazing for the last 4 years is going to remain that way for at least 4 more.  And I’ll get to be there for it all. And my son, who lives and dies with SKC, will be there with me. The sheer JOY on his face when I told him they were for sure staying is something I will never forget.

And then, for good measure, we went out and rolled the squad that won the last 2 titles before we took it last year.

I will never forget that day. I can’t possibly ever explain what this means in KC.  With all that we’ve been through with our sports the past couple decades.  Then we finally get a real team.  Then the city totally buys in…we give them our hearts and souls.  Then,  just when it seems like it’s all over, THIS happens.

We love you Sporting, oh yes we do.

We love you Sporting and we’ll be true.

We will forever, bleed blue!

Oh Sporting we love you.