The two epic Champions League semifinal ties did produce two memorable and perhaps historic 1st leg matches this week, but not in the way that any of us expected. One wordsmith needed only five of them to sum it up: “Two days of destruction. Unbelievable.”

Tuesday was Bayern Munich-Barcelona, Wednesday was Borussia Dortmund-Real Madrid. The Bavarians were favored in the first match, playing at home and in incredible form this entire season, while Barcelona have been wobbling for months. But surely no one predicted a Bayern’s 4-0 shellacking of Barça, nor Dortmund’s 4-1 decimation of Real Madrid the next day.

On Tuesday, Bayern dominated start to finish, playing with speed, power, and finesse. The first two goals came off corners–which Barcelona were conceding at an alarming rate, indicative of the fact that although Bayern predictably had less possession that Barcelona, their possession was much more potent.  Bayern was especially dominant on the flanks, with Robben and Ribery winning their battles with Dani Alves and Jordi Alba–pinning the latter two back for the most part, thus robbing Barcelona of their width in attack.  Coach Larry summed up Bayern’s masterclass thusly:

Bayern executed their plan perfectly. Press Barça to force wide at the back, and re-press from all directions if the ball reached attacking areas.

Their sheer relentless effort and physicality won them the match.  Not ever have I seen a team play at that pace for an entire match, though perhaps Bayern took a bit of a break for about 15 mins after the 2nd goal.

Of course, they needed the right envirionment allowed by the referee to do so.  Plus, the two goals (Gomez offsides on the 2nd, Muller’s pick to set Robben free for the 3rd) they benefitted from bad ref decisions are what ended the tie.

I’m hard pressed to think of a worthwhile contribution by any of Barca’s front players. They had practically zero attempts on the goal, and the only couple of serious chances fell to Bartra.

Much much more tactical analysis from ZonalMarking on his site, as well as in a Guardian column  highlighting Spanish deep-lying midfielder Javi Martinez as a key player in the match. Martinez is the starred previously for Athletic Bilbao, and then controversially made the big money move to Bayern over the summer–a move that might have been to Barcelona, who wanted him badly, and could have had him had the Catalans been willing to show the Basques the money.

Excerpt from the Javi Martinez column:

Bayern’s key tactical weapon was Javi Martínez, whose primary job was to track Andrés Iniesta’s runs – but he played a much broader role, imposing his physicality on the game with a dominant midfield performance. He repeatedly dispossessed Barcelona’s midfielders and also stormed forward into attack unexpectedly to drive Bayern up the pitch – he demonstrated precisely why Barcelona were interested in signing him from Athletic Bilbao last summer. This was a landmark performance from the Spanish holding midfielder – he has been widely regarded as a success in his debut campaign at Bayern but here he outperformed his more illustrious international team-mates with an all-round performance Busquets, Xavi and Iniesta might not be capable of.

By Wednesday morning there were of course uncountably many “end of an era” op-eds littering sports pages across Europe. If you’re only going to read one, it might as well be Sid Lowe’s “changing of the guard” piece:

And so this Barcelona generation comes full circle. That, at least, is the conclusion many were drawing immediately after this astonishing defeat. For many this represented the end of an era. That conclusion is premature but there was a kind of seductive logic to it. Few teams have been as aware of their place in the club’s history as this one and, even at their lowest moment, there was a certain symbolism, a symmetry.

Barcelona equalled their worst ever European result, their worst result for well over a decade. They also equalled the result that Barcelona fans will never forget, from 18 May 1994. The Dream Team were the model that Pep Guardiola said all subsequent Barcelona teams sought to emulate. This generation had done so in just about every way; perhaps all that was left was to do so in defeat too.

Jonathan Wilson had built up the expectations, writing pregame that this “meeting of the two great sides of the age” had the potential to be an era-defining encounter. And perhaps it was–after the match JW pivoted towards speculating whether now sides all over Europe (the world?) would try to emulate Bayern instead of Barcelona. His lede contains a nice capsule history the eras of European champions:

The sun has set on the age of Barcelona and dawn has broken on the bright new age of Bayern Munich. Bayern’s demolition of Barça last night certainly had the sense of a game that changed the order of things – even in advance it felt like an era-defining game. It crystallised the sense that Barça are not quite what they were, a weary shadow of the team that won the Champions League in 2011, and that Bayern are rising, inspired by a crop of fine young players and German economic might.

As such the victory – aside for all but ensuring Bayern’s place in theChampions League final – has largely symbolic value. That was the moment, historians will say (assuming things pan out as we think they will) when the crown was passed on. Except, of course, that it’s not that simple, not least because eras are no longer so easy to define as they used to be. Look down the list of European Cup winners and there are reasonably clear divisions: the age of Real Madrid separated from the era of Catenaccio and Milanese domination by the Benfica interregnum, the total footballing time of Ajax and Bayern Munich, then the period of English domination that was ended at Heysel. That led to a period of flux before the arrival of Arrigo Sacchi’s Milan.

We’ll have to push a recap of Dortmund-Madrid into a separate post, to be published in the near future. Not only is this post too long already, but we haven’t even finished watching that match.

(Via a Guardian gallery of Spanish newspaper coverage of the historic defeat: 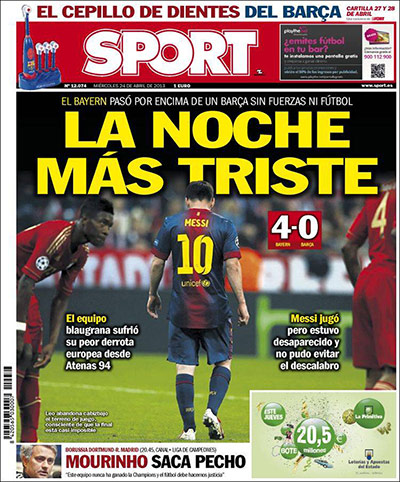 Previous PostClash of the Titans II: Real Madrid vs Borussia Dortmund
Next PostDictators and Soccer: Popes, PR and the Vatican Soccer Sin Bin