A better showing for the Rossoneri today against Madrid, due in no small part to the injection of pace at the center of their formation in the form of Kevin-Prince Boateng. Gattuso was a demon in defense, doubling Ronaldo every time he touched the ball, and making a general nuisance of himself whenever Madrid came with 40 yards of goal.

Still, it was Madrid who dominated chances throughout the game as well as having the better of threatening possession.  Their first goal was a thing of beauty, and there were times when the ball moved so quickly between their attacking four that Milan was left simply standing and watching.

The side the Italians fielded today was slightly younger than the one the sent out in Spain, and they looked more determined to defend even if nothing was really materializing up front (save for a couple of Ibrahimovic chances that he really should’ve scored). Maybe they’re just too slow? Milan is obviously full of aging stars, but how old are they exactly?

The chart below represents the ages of all the players who participated in today’s match, Madrid in (away) blue, and Milan in their red (actual red!: RGB 158, 51, 50). The vertical bars are the average age of Madrid (25 years) and the average age of Milan (29.8 years). It doesn’t take into account exactly how long the players were on the field, so Pipo is skewing the average a bit in that area. By the way, he was a yard offside on his second goal. 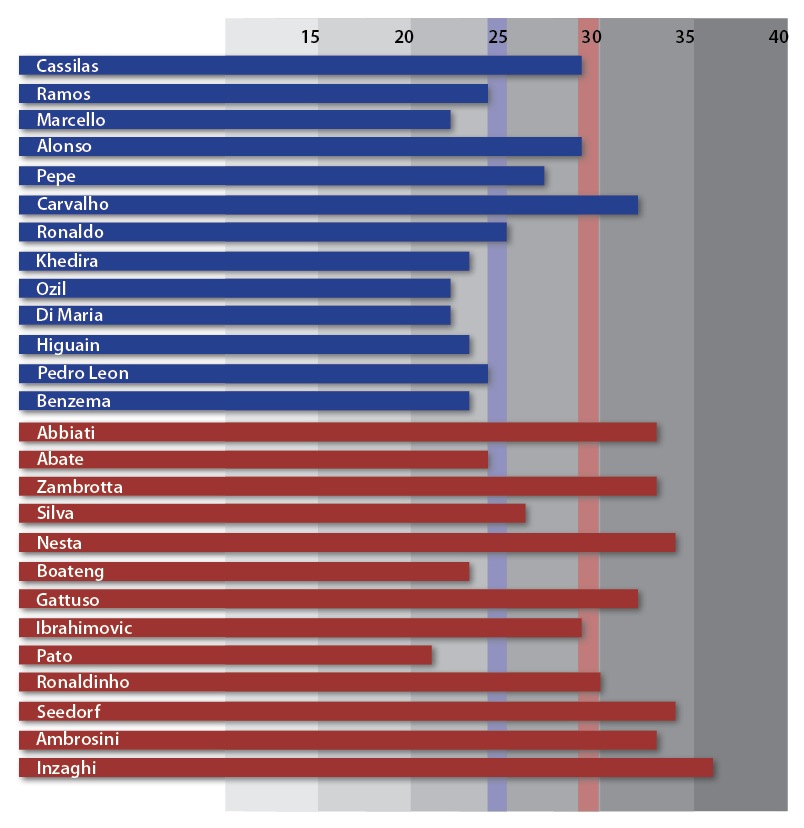