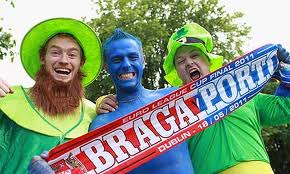 Three matches to watch out of the plethora:

Sunderland vs Tottenham Hotspur (7:45amET): Fourth-place Spurs visit the Stadium of Light. The pressure is on Spurs to hang on to 4th, but Sunderland have been impressive since Martin O’Neill took over in place of the sacked Steve Bruce in December.  From the Guardian’s mbm this morning:

Yep, this one is all about pressure. Newcastle have poured in on Spurs with their win over Swansea on Good Friday, now Spurs can slather it over Arsenal with a win at the Stadium of Light.

That’s far from a given, though. Sunderland have lost on home soil only once since November, should’ve completed a double over Manchester City last weekend, and are playing with the verve and swagger of brash young pop stars. You know, REO Speedwagon, Norman Greenbaum and the rest of the popular beat combos the kids are listening to today.

Lazio vs Napoli (3pmET): A proverbial six-pointer in the competition for 3rd place in Serie A (and hence a spot in next season’s Champions League). Lazio currently hold that 3rd position with 51 points, but Napoli (and Udinese) are close behind with 48 (and Roma are a single point behind them).
Sporting Braga vs FC Porto (3:30pmET): A rematch of last spring’s Europa League final, and another 6-pointer, in the fervid race for the Liga Sagres race.  It’s tight at the top of the Portuguese table: Porto are in 1st (60 points), their Lisbon archrivals Benfica are in 2nd (59), and surprising Braga have climbed to 3rd (58), following a remarkable run of 13 straight wins that started in early December and continued until last weekend–when they fell to Benfica!
From the preamble to the Guardian’s mbm of the Europa League final between these two last May:

These teams are from the same country and tonight they seek the same prize – but that’s about all they have in common. On one hand we have Porto, long one of the top clubs in Europe, a side who have just finished their domestic league unbeaten and 21 points clear of their nearest pursuers, and who have a fearsome forward line in the form of Falcao and Hulk as well as the most acclaimed young manager in the continent, 33-year-old André Villa Boas. And on the other hand we have Braga, a humble club whose only major is the 1966 Portuguese Cup (what it about 1966 and minnows winning cups?), who finished fourth in their domestic league this season, and in the process suffered two defeats by Porto. Indeed, that tends to be how their meetings go: Porto have won 92 of the 131 previous encounters between these clubs, Braga have triumphed in just 17. It would be a minor revolution if the underdogs were to prevail tonight.

Well, some things have changed at Porto over the summer. AVB of course left for the big time, as did Falcao (who’s continued to bang in the goals for Atlético Madrid, in La Liga and again in Europa–most recently on two days ago).

See also here for our preview of that Europa League final last spring, including a Google Map showing how Braga and Porto are a mere 50km  apart in the north of Portugal.

Among Mr. Souto de Moura’s major works is a soccer stadium set into a mountain in Braga, Portugal, which was completed in 2004.

It is in a former granite quarry, and more granite was blasted away and crushed to make concrete for the structure. The stadium has two long sides, with the jagged face of the mountain forming a third side and the fourth open to a view of the city.

Quite a bit, apparently.  First came Arsenal’s shocking 2nd half collapse last Saturday in the North London derby, at home no less–yes, the headlines read “Spurs Triumphant at the Emirates“.  Certainly, Arsenal supporters must have thought, they would rebound mid-week in Europe, against a Sporting Braga side that hadn’t accomplished much in Champions League so far this fall–a side that the Gunners had beaten 6-0 back in September on Matchday 1!  But alas, all too predictably perhaps, Arsenal went down without much of a fight, losing 2-0 on two fantastic second half finishes by Braga’s Brazilian striker Matheu.

Watch the highlights from Tuesday’s match–or lowlights rather, if you’re an Arsenal fan:

Actually, although Matheu does deserve great credit on both goals, close review of the video reveals that both chances were allowed by a flat-footed Arsenal defence.  In fact both came off counterattacks from Arsenal free kicks.  In the first goal, Matheu ran right by Denilson to receive a perfect long ball (one that he called for as flew past Denilson); for the 2nd, Matheu kept running full-speed while Squillaci slowed to a jog, allowing him to pick up the loose ball after an Arsenal defender (Denilson again? not sure) got knocked to the ground going for the ball.

Who is this Matheu?  He is Matheus Leite Nascimento; age 27, came over to Portugal five years ago, spent one season with a second division side before Braga signed him.  He’s been coming on strong over the past few months–he scored against Celtic and against Sevilla in Champions League qualifying matches over the summer.  After the latter goal, he produced a pacifier–and hence a celebration worthy of Chad Ochocinco.  Take a closer look at the photo above.

Speaking of the Bengals WR and multimedia star, turns out he’s multisport too. Here’s an interview we’ve been meaning to post–Ochocinco does Soccer Talk (compares himself to Drogba; talks about his great friends Ronaldhino, CR, Thierry Henry, Ashley Cole; drops hints about playing futbol during the football offseason; describes how he warms up by juggling):