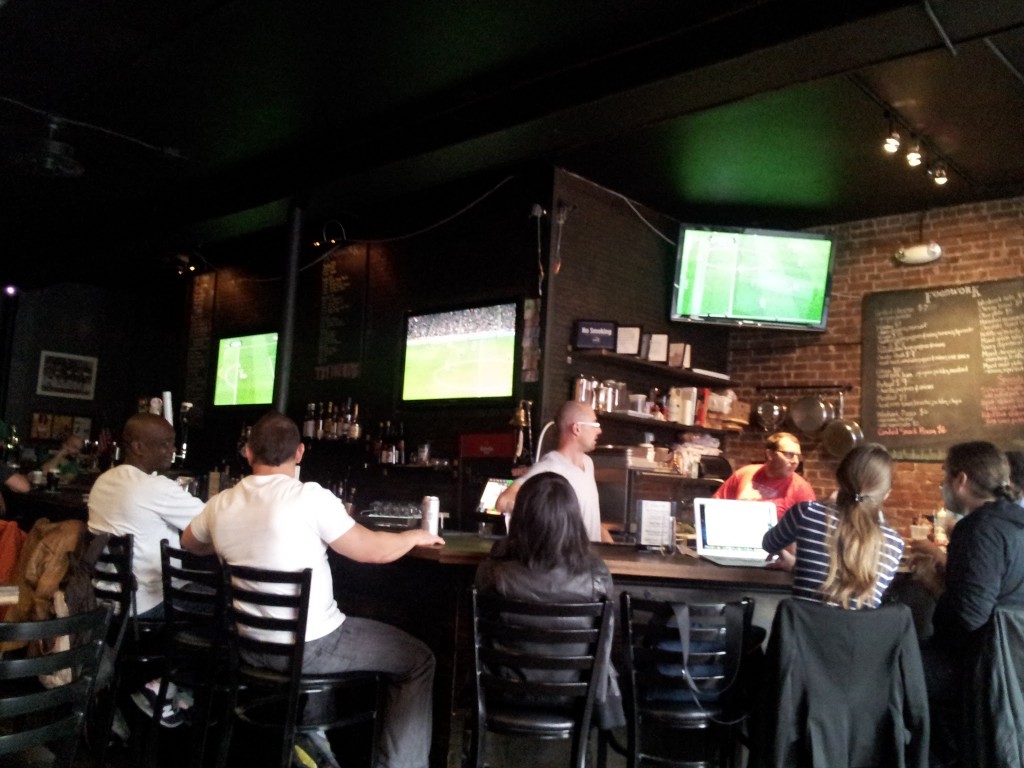 It was quite an exciting first half to Champions League Matchday 3 yesterday. We watched at Woodwork again, which was nicely mellow, with 3 different matches on their 3 screens–from left to right: Shakhtar-Chelsea, Juve-Nordaelland, and Barcelona-Celtic, with the house sound system tuned to the Barça match for the first half, and the Juve match for the 2nd.  (One Manchester United fan showed up too late to claim a TV, and so was reduced to streaming the match against Braga on his laptop.)

For a while it looked like we were headed towards upsets at the Camp Nou, at Old Trafford, and at Nordsjælland. But while the “big” club escaped in each of those matches (although Juve only with a point, thanks to a fantastic late goal by Vucinic), our attention was primarily on the Shakhtar-Chelsea match, and out in far eastern Ukraine the upset held. As the Mirror cheekily put it, it was “A Shaktar the system: Champions Chelsea outclassed and outplayed in Donetsk.”

And although yesterday was good, today just might be better.  Of the eight remaining Matchday 3 fixtures, the ones to watch, IOHO, are Arsenal-Schalke, Málaga-Milan, and of course the two matches in the Group of Death—Ajax-Man City and Borussia Dortmund-Real Madrid this time around:

This first leg of Champions League quarter finals has produced some wonderful football. We saw crafted, powerful and improbable goals, comebacks and wins away from home, and a very entertaining match in Barcelona whose score doesn’t give enough credit to the visiting Ukrainian club Shaktar Donestk.

I was particularly excited for this match-up. I really thought the Brazilian carnival would produce a shock result in Barcelona, or at least stick a few into the net in a high scoring affair that would give them a chance in the return leg. But fortune wasn’t on the side of “wily old cat” Mircea Lucescu’s boys, and while they did produce some lovely attacking movement and held the ball nicely, they couldn’t finish as calmly or often as the home team.

A couple months back we took a look at some of the players in attack for the Miners and after the way they dismantled Roma over two legs I certainly didn’t expect them to be slapped with la mano from Barça. They were the first to attack, but were quickly countered and a lucky deflection fell to the feet of Iniesta, who found himself with his pick of open corners some 6 yards out.

Going down so early in the match didn’t seem to effect Shakhtar’s mentality. They had come prepared to press high and push the attack, and they did pretty well in winning the ball around midfield and keeping Barça out of dangerous areas. But Messi and company only need the slightest chance to put you down a goal (Messi being particularly focused on a night when the rest of his team seemed a little unsettled at times), and some sloppy play in and around the back gave the blaugrana opportunity enough. A prime example was Dani Alves’ goal, made posisble by the weak effort of Shakhtar’s keeper, Andriy Pyatov, on the lobbed inbound pass. Pyatov is a full 7 inches taller and must be at least 50 lbs meatier, yet instead of breaking Alves in half on what was clearly a 50/50 ball, he let the tiny right back sneak in and slot home.

Still, the final score should very well have included a few more ticks on the Ukrainian side. Willian was finding space behind the defense and Jadson had some excellent moments in the attack, but the finishing touch was not there on more than one occasion. Adriano was preferred to Eduardo with the Croatian national making a muted appearance at the end, and Jadson made way for Fernandinho with half an hour to go. Nothing came of the changes.

The return leg at the Donbass Arena is sure to have plenty more goals, and this time a few more for the opposite side, but it’s very unlikely we’ll see the team from an old Soviet mining town facing Real Madrid in the semi-final.

In case you missed the this week’s Champions League action, here are highlights from three of this week’s 16 matches:

Tottenham Hotspur 3, Inter Milan 1: In the performance of the week, which has made him the talk of European football, 21-year old Welshman Gareth Bale led Spurs to a big victory at home over defending champion Inter.  Though he wasn’t involved in Spurs’ first goal (Modric feeding van der Vaart for that one), he singlehandedly created the latter two by streaking down the left wing and feeding perfect, nearly identical low crosses right into the path of the goalscorer (Peter Crouch for the 2nd, Pavylyuchenko for the 3rd (that after Samuel Eto’o had pulled Inter back to 2-1 with a suberb finish).

Here is the Guardian’s “as it happened” commentary on the last goal, to read along as you watch:

GOAL! Spurs 3-1 Inter (Pavlyuchenko 89′) That is just outlandish from Bale! He received the ball around the half-way line and simply belted it 20 yards beyond Maicon and set off after it. He got there first and, best of all, played the perfect pass across the face of goal, inviting Pavlyuchenko to smash it simply past the keeper. Bale has blown Inter away tonight.