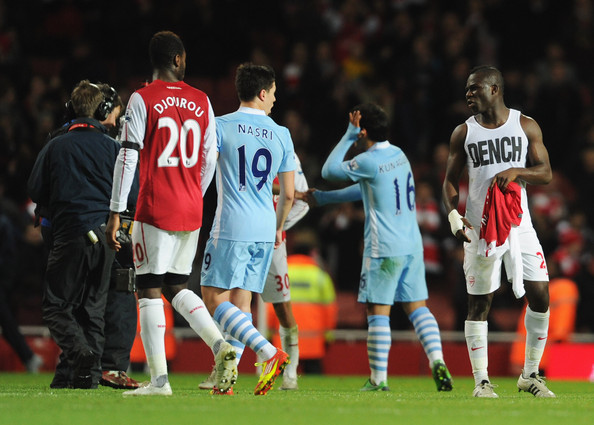 The three matches we chose yesterday weren’t the most compelling: Sunderland-Spurs the most dreary, a scoreless draw, while Lazio beat Napoli 3-1 (highlighted by a fantastic chilena goal by Mauri), and Porto beat Sporting Braga 1-0 on their home ground.  There were other interesting results in Italy, where AC Milan lost to lowly Fiorentina due to a late late goal, and later in the day Juve dispatched Palermo, thus pulling even with Milan on points at the top of the table.  And in Germany, both Bayern München and Borussia Dortmund won (vs Augsburg and Wolfsburg, respectively), and thus Dortmund’s 3-point lead at the top of the Bundesliga table was conserved–setting up a showdown this coming Wednesday.  But more on that later–for now, here are a few matches to watch on this sunny Easter Sunday:

Arsenal vs Manchester City (11amET; FSC & Fox Deportes): The big match of the weekend in England.  #4 (though perhaps only temporarily) hosting #2 at the Emirates, with a full 3 points crucial for both teams.  Arsenal need them to climb back into 3rd (ahead of local rival Spurs), in their continuing effort to consolidate a top 4 (preferably top 3) finish.  City need them to stay within striking distance of their local rivals United–if City drop points today, they can say goodbye to any chance of winning the title. Which would give extra pleasure to many Arsenal fans, given that City have developed a habit of poaching some of Arsenal’s key players over the past few years–most recently and prominently French playmaker Samir Nasri–luring them north with petrodollars, plus the promise of hardware in the near future–something Wenger has been unable to guide his sides to in the past handful of years.

When these two teams met in mid-December at the Etihad, City slipped by the Gunners 1-0 thanks to a goal by their slight Spanish star David Silva. Indeed, the theme of our writeup was “Silva es magico.”  But since then City’s (on-field) fortunes have waned, and the conventional wisdom seems to be that it’s primarily due to Silva tiring. He certainly hasn’t displayed the magical realism that was on display weekly in the fall (most prominently in the Massacre at Old Trafford early in the season).

We noted that that December result knocked the Gunners out of the title race–but that was only the beginning of the crisis, with Arsenal seemingly falling out of contention for even a Champions League spot after a horrendous January (lowlighted by the Night Arsene Lost the Emirates–also against United).  But they rebounded with an impressive February, which started with that memorable 5-2 win against Spurs, although they’ve wobbled against recently, with a loss to QPR last weekend.

Athletic Bilbao vs Sevilla (12pmET; GolTV): Two underachieving sides, at least domestically. We’ve been tracking Athletic closely, and they’ve been delivering in cup competitions–thru to the semis of the Europa League, and in the finals of the Copa del Rey (where they’ll be taking on Barcelona, in May)–but they’ve slipped into the bottom half of the table as their league form has slipped badly.  Sevilla has been trying to get back to the level they achieved a handful of years ago, and although they’ve got some talent–including current Spanish internationals Álvaro Negredo and Jesús Navas–their game perhaps depends a bit too much on aging former stars like Malian Frédéric Kanouté and well-traveled former Spanish international José Antonio Reyes.  Reyes has come full circle–he came up through Sevilla youth system and made his La Liga debut with them over a decade ago, and then went on to play for: Arsenal, Real Madrid (on loan), Atlético Madrid, Benfica (again on loan), before returning to his first club.

Real Madrid vs Valencia (3:30pmET; ESPN2, ESPN Deportes, ESPN3.com): The slightest bit of pressure is on Madrid now in La Liga, since Barcelona have pulled to within 3 points.  Hence, anything less than a win would be considered disastrous among los madridistas. It is Valencia, which as seemingly always sit in 3rd–although if they lose and Malaga win Monday against Racing, the latter would pull ahead of them in the table.  Valencia, like Athletic, is thru to the semis of the Europa League, but similarly their domestic form has dipped recently too.

As we admitted a couple weeks ago (here), we don’t understand the how or why of the Europa League. And after 16 Champions League games over the past two days, we’re not particularly jonesing to watch more pan-European club matches today. But if you are, there are 24 games today (48 teams in the league, recall).

The ones we would watch, if we were forced to sit down and do so, are the following (pulled from UEFA’s Europa League page, “all times are CET“–you do the math for your timezone)