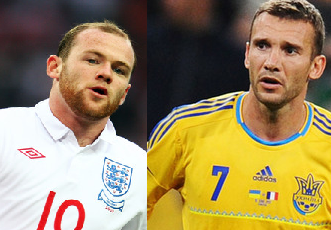 We’ve nearly reached the end of the Group Stage. Two matches to go in Group D today: Sweden-France and England-Ukraine, which will determine the final two quarterfinalists. Already in the final eight: Czech Republic, Greece, Germany, Portugal, Spain, and Italy.

The latter two claimed first and second in Group C with tense victories yesterday. Spain beat upstart Croatia 1-0 off a 88′ tiki-taka type goal: Cesc Fábregas with a looping lofted ball over the defense to Andrés Iniesta, who was just barely onsides, and who then played a square ball to substitute Jesús Navas, allowing him to blast it home unopposed.  But there were tense moments for Spain before that–most memorably, Spanish captain and goalkeeper Iker Casillas denying Croatia’s Ivan Rakitic when it was still scoreless.  It was a crucial save, since a Croatia win, combined with an Italy win, would have see Spain shockingly eliminated.  As it is, Croatia goes home, but they certainly impressed in this tournament.

Italy finally won a game, 2-0 over Ireland, though it was also a tight game. Mario Balotelli added a spectacular insurance goal in the 90′–after which he was spectacularly gagged by his teammate Leonardo Bonnucci.

On to Group D.  Sweden is out, so it’s France, England, or Ukraine for the final two spots in the last eight. France or England advance with at least a draw–hence, Ukraine need to win in order to advance.  I’ll be wearing my Shevchenko jersey and rooting for them to do so.

Sweden have been eliminated.

On the last match day (19 June) the teams advancing from this group (winner; runner-up) will be: 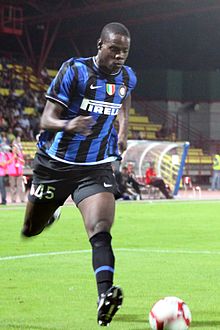 Remember how yesterday we wrote about our friend that we’re aiming to initiate into the cult of football?  (No? Read this real quick.)

Well, we emailed that link to him–not only did he read the post, when we asked if he clicked through and read the three links we posted (one each for Messi, Balotelli, Dempsey) he replied via email (and gave us permission to blockquote):

i just read them all.

i had no idea messi is only 22 … looks and plays like a wise old owl. as you predicted, i instantly fell for the dempsey story of a gifted (texan?) american cutting his teeth until finding success in the premiere league. as for the italian/african UPPERCASE!! phenom from grantland, all i can say is awesome. i cant wait for his highlights to live up to his hype.

You can tell the guy knows sports, and sounds like he’s up for our little project.  This will be fun.

I promised him a YouTube clip in this post. I’ll do one better and offer up two

We’ve got a good friend who’s a big sports fan, but mostly of the traditional American variety: primarily basketball and football, both college and pro.

We asked him if he’d ever thought about watching some soccer, and he said what it would take would be a compelling player for him to follow.

Which obviously got us thinking which one(s) we’re going to pick for him to watch.

Here are our preliminary picks–one obvious choice, one a bit less so, and one American:

1) Lionel Messi
2) Mario Balotelli
3) Clint Dempsey (Not only is our friend American, but he’s got an affinity for Texas–the teams he follows most closely are the Dallas Cowboys and UT football. Also the Lakers.)

We’ll be back with a followup post giving some context as to why these three, including some links to background articles and YouTube clips–not least for the friend in question. But we also welcome additional suggestions and/or feedback on these choices. Hit us up on Twitter or Facebook.

We tuned into the Man City v Aston Villa match for one reason today, to watch Villa’s American right back Eric Lichaj. The 22 yr old was impressive in shutting down Gareth Bale in their loss to Spurs two days ago, and we though maybe he could replicate the performance today. No such luck. Against Spurs, Lichaj showed pace equal to Bale, made a number of impressive stops, and even had a chance at the end of the game to pull back a tying goal.

Lichaj’s first contribution today against City was to offer Mario Balotelli the chance to flop and earn a penalty. The cocky Italian felt a hand on his should and went down as if a piano had fallen on him. He then converted the penalty kick to put City ahead. City’s next goal was probably not a goal as it looked to be headed off the line, and then their third, a Balotelli tap-in, came from an offside position.

Gifted three goals City played keep away and Villa didn’t have much chance to get back into the flow. Balotelli then converted another penalty to score a hat trick, pumping his head full of more hot air after just receiving the World Young Player of the Year award last week. His closest competition for that trophy was 18 yr old Jack Wilshire who has been playing well, and holding down a starting role at Arsenal. Had Balotelli heard of him?

“What’s his name? Wil…? No, I just don’t know him, but the next time I play against Arsenal I’ll try to be careful. Maybe I could show him the Golden Boy trophy and remind him that I won.”

He’ll have a chance next week when Arsenal meet City, though it’s unlikely Balotelli – the man who has proclaimed himself the best player in the world besides Messi – will get on the field earlier than the 70th minute. Normally we’d focus on the flailing Italian national side, a team struggling to rebuild after too many years relying on aging players and outdated systems. Instead, the Italians we’d like to focus on now are the small group of hate-filed idiots who felt it necessary to cross the border into Austria with the express purpose of making monkey chants at Mario Balotelli. His own countrymen travelled out of the country, unfurled a banner that read “No to a multi-ethnic national team”, then hooted like apes at one of their nation’s most promising attacking players. (By the way, though born in Italy he’s of Ghanaian descent).

Understandably, Balotelli is fed up. Sure he’s a prick, but this sort of treatment is simply unacceptable. In his own words:

“Honestly, I don’t know what to say. If I have to hear those chants every time, you can’t go forward like that. I leave others to do the judgment. I am happy to be in the national team. It wouldn’t be right to stop a game because a few fans that turn up to the stadium behave like that. We need to change these people but it’s not me that has to do it. Where I live, the people don’t reason like these people. A multi-ethnic Italy already exists and we can do better.”

Italy coach Cesare Prandelli had some words on the matter, too:

“I feel disappointment and anger. We always hear these chants and something has to be done about it. We feel helpless. He [Balotelli] has the support of everyone.”

“This national team is open to anyone who is an Italian citizen.”

Super Mario Balotelli, who scored on his debut for Man City in their Europa qualifying game, is bringing more than his wild disposition and playing potential to Cottonopolis. Let’s all say hello to his beauty queen girlfriend, Melissa Castagnoli.

It’s doubtful that the Inter Milan transfer will get 90 minutes against Liverpool come Monday, but at the very least his lady friend will add some flavo(u)r to the WAG section at the Eastlands. Of course, Balotelli will stir it up in his own fashion:

Jose Mourinho, a man who does not tolerate eccentric behaviour in anyone other than himself, had called Balotelli “unmanageable”; one performance he rated “close to zero”.

Says Balotelli, “I don’t want to talk about him, he is not my coach any more. Am I a bad boy? I don’t know and, really, I don’t care.”