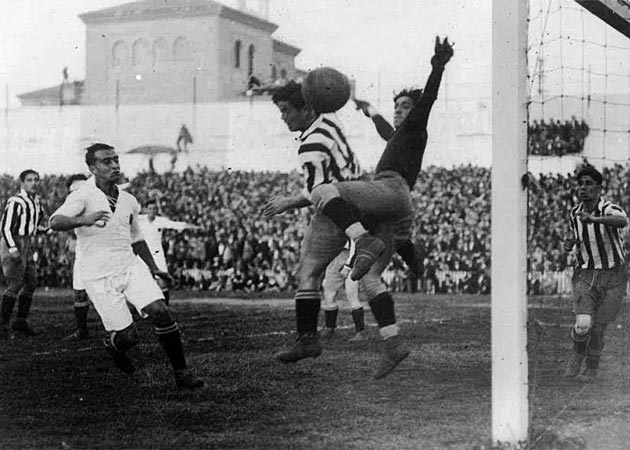 A busy week across the continent, including five more matches in the English Premier League.  But none of those look particularly compelling to us, while there are four compelling and consequential matches elsewhere featuring teams at or near the top of their domestic tables–highlighted a huge match in Germany and a derby in Madrid.  Here they are in order of importance, according to our subjective estimation and interest–given that it’s this member of CF’s birthday today, I’ve humbly requested the good guys at Woodwork to tune of their TVs to GolTV so that we can watch the first two matches in the German-Spanish doubleheader.  Join us if you’re in the neighborhood:

Borussia Dortmund vs Bayern München (2pmET, GolTV): #1 vs #2 in the Bundesliga–the biggest match of the day, and the biggest match of the season in Germany. Bayern has closed the gap between them and Dortmund to 3 points over the past couple months, so that a win on the road in North Rhine-Westphalia, in the mammoth Westfalenstadion (capacity: 80, 720) would pull them even at the top of the table.

Dortmund won the title last year, and with their campaign to repeat, and their young and exciting squad–to be strengthened next year by the arrival of Marco Reus (“the latest star off Germany’s production line“), for whose signature they beat out Bayern–they are looking to challenge Bayern’s Germanic hegemony.  (See this feature on “Why the emergence of a rivalry between Bayern Munich & Borussia Dortmund is essential to the revival of German football“–something that even Bayern fan Boris Becker agrees with.)

In a previous “what to watch” feature, we noted that Dortmund has:

young and exciting players from across the globe on their squad: strikers Robert Lewandowski (Poland) and Lucas Barrios(Paraguay); Japanese midfielder Shinji Kagawa; Serbian(-American) Neven Subotić, who teams up with German Mats Hummels in central defense.  FC Bayern blogger & “Bundesliga wannabe expert” @RedRobbery kindly replied to our question about who to watch in this match, and directed us to also watch midfielders Sven Bender and Jakub “Kuba” Błaszczykowski. (The latter is captain of the Polish national team, and described by Polish great Zbigniew Boniek as a “litte Figo” when Dortmund signed him from Wisla Krakow in the summer of 2007).

Bayern’s squad should be better known to non-German watchers, given their prominence in the Champions League (where they’ll be facing Real Madrid in the semis–1st leg next week!), and the prominence of their star players on various national sides: star wingers Arjen Robben (Netherlands) and Franck Ribery (France), along with the core of the exciting German national team: Bastian Schweinsteiger, Philipp Lahm, Toni Kroos, Thomas Müller, Mario Gómez, Jérôme Boateng, Holger Badstuber, Manuel Neuer. Two more players to watch in central midfield: Ukrainian Anatoliy Tymoshchuk (who will be leading the Euro2012 co-hosts this summer) and Brazilian Luiz Gustavo.

Atlético Madrid vs Real Madrid (4pmET, GolTV): El derbi madrileño is always a bitter battle, and this time it’s a match that matters deeply for both teams. Real Madrid is still at the top of the table, where they’ve been all year–but their once-commanding lead over Barcelona has shrunk over the past month to a mere 4 points, following a three draws in their past five matches (1-1 to both Malaga and Villareal, and a scoreless draw Sunday to Valencia)–and now it’s down to a single point following Barcelona’s 4-0 win over (3rd Madrid team) Getafe. So the pressure is on Mourinho and his squad, especially with El Clasico coming up a week from Saturday at the Camp Nou.

Atlético are 7th in La Liga, 7 points behind 4th place Valencia (who’ve just relinquished their seeming stranglehold on 3rd to Malaga) and a Champions League spot.  A return to Europa is more likely–where they’ve had a successful run to the semifinals this year, and in fact play Valencia over the next two weeks (April 19 and 26).  If a goal against Real is going to come today, it’ll most likely be from prolific Colombian striker Falcao, who’s had a great first season in Spain with 20 goals, tied for 3rd best in the league. But 3 of the top 5 are from Real: Messi 39, Cristiano Ronaldo 37, Falcao 20, Higuain 20, Benzema 17.

(Photo above grabbed from viejomadrid.tumblr.com, who got it from an excellent Historias del Derbi fotogaleria)

Juventus vs Lazio (2:45pm, Fox Soccer Plus, ESPN3.com): Juve is still undefeated in Serie A, and after Saturday’s results they’re back on top of the table.  Lazio continues to solidify their hold on 3rd place and hence a Champions League spot–at the expense of competing clubs with bigger names (Udinese, Napoli, Roma, Inter–who sit behind them in 4th, 5th, 6th & 7th).

We’ll be watching for peerless deep-lying playmaker Andrea Pirlo–who Zonal Marking’s Michael Cox recently described as “the most important player of his generation.”

We’re approaching the end of club football in Europe, and while no fixture can be taken for granted at this point, there’s not a whole hell of a lot that’s particularly interesting this weekend. The games are important at the top and bottom of the table for sure, but will that make them something we want to watch? We think not.

The few exceptions are below, all times Eastern US, and click the teams for viewing information all around the world. Just think, with so few games to care about this weekend maybe you’ll actually get out there and have a kick about yourself? When’s the last time you did that afterall?

9:00am Inter Milan vs Lazio Lazio sits in fourth and Inter in third, with the sides separated by three points and automatic champs league qualification hanging in the balance. Inter does have a better goal difference though so even a loss would keep them in current places, but with Udinese breathing down the necks of the Rome side this match could have larger ramifications.

12:00pm Valencia vs Real Madrid Second place travels to third (though there are 14 points between them). Valenica will look to keep ahead of Villareal, while the Madriders are still keeping the faith for league glory. Highly unlikely on that later bit? Indeed.

8:30am Feyenoord vs PSV It’s all very tight at the top of the Eredivisie. Psv is currently in first position ahead of Twente, but only on goal difference, with Ajax siting third one point behind both (and with a better goals-for record than Twente). It’ll be a race to the end, and while Feyenoord aren’t the powerhouse team that challenged Ajax for the title so many times in the past, they’re no slouches either and could cause the champion’s league slots to shuffle this weekend.

An exciting weekend as always around world football, and more action to come with Champions League matches tomorrow and Weds. For now, let’s take a quick look at the fantastic goals of Samir Nasri vs Fulham. “The overbite”, as we call him in the Cult Football offices, has hit top form this season, and his composure on the ball and willingness to shoot is sorely needed, especially with Arshavin going missing in the attack of late. Enjoy!

How about dem aquile?

From Italy, Rafa Benitez continues to lose, this time to Lazio. The result puts Lazio in second place and sends Inter dangerously close to losing any invitation to european tournaments next year. Lazio are actually a very entertaining side to watch, and absolutely dominated Inter on the way to a 3-1 victory. Particularly outstanding were the Brazilian midfielder Hernanes and his point man in attack Mauro Zárate. Hernanes has a deft touch and an eye for just the right pass, while Zárate has an excellent sense of space, is a strong runner and classy finisher.  We will be paying attention…