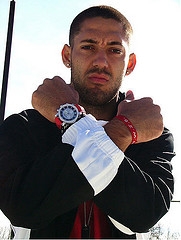 For those looking to spot Americans in action overseas, check the Europa League—it’s televised, great teams abound and, well, there are Americans, too. The elusive soccer grail, as it were. Europa League matches offer rare chances to see national team expats competing against high-caliber opponents on a real live TV. No streaming, no pirating, just a mildly usurious cable package.

While English Premier League devotees get to see Clint Dempsey (right), Tim Howard and Brad Friedel scoring and shot-stopping on the regular, and Serie A followers will catch the occasional glimpse of Michael Bradley, the Europa League showcases players in the Portuguese, Dutch and Belgian leagues who get showcased seemingly nelsewhere. To be fair, GolTV does broadcast  the occasional Bundesliga match, giving some small-screen shine to Steve Cherundolo and the German-Americans in the national team, but to see Oguchi Onyewu (Sporting Lisbon), Jozy Altidore (AZ Alkmaar), Sacha Kljestan (Anderlecht) or Jonathan Spector (Birmingham City), Europa’s your best bet.

Ironically, the team most populous in expat Americans, Rangers, utterly dominates the Scottish Premier League this season but got dumped out of the Europa League in late August (after getting dumped out of the Champions League qualifiers in early August). Carlos Bocanegra, Maurice Edu and Alejandro Bedoya regularly receive starting berths, but that didn’t stop Slovenian minnows NK Maribor from handing the team its collective Glaswegian ass two months back, so that’s that for the American Rangers. Other Americans who could be seen until they couldn’t are/were Clarence Goodson (Brøndby) and Michael Parkhurst (Nordsjaelland), who both compete in the top flight in Denmark.

Fear not, though. Many survived the qualifying cull, performed well in Matchdays 1 and 2, and may again feature this Thursday on Matchday 3.

High-functioning U.S. perennial Dempsey has been on fire for Fulham this season and he scored the lone goal against Honduras two weeks back. He gives everything in every game and excels at nearly everything he does (check the Deuce’s rhymes on YouTube…or better yet, don’t). Friedel, for his part, has proven such a crucial addition to Tottenham since joining this summer that Tottenham keep resting him in the Europa League, so don’t necessarily expect to spot his particular shiny bald pate, unless it’s atop a body seated on the bench. Spector, who once more sees the TV cameras zooming in after West Ham’s relegation last season, helped exact revenge on Maribor for his SPL compatriots in Birmingham City’s 2-1 win over the Slovenian outfit on Matchday 2, so good on him (thanks be giving, Rangers supporters).

Altidore will likely lead the line again for AZ Alkmaar, after netting his fourth in the tournament and seventh of the season for the Dutch champions last time out. The spectacularly bearded Onyewu, that unlikely cross between Isaac Hayes and Kareem Abdul-Jabar, has similarly returned to form with Sporting Lisbon, after escaping from PSV Eindhoven purgatory this past summer. From the bench, current Schalke 04 midfielder and former Blackburn loanee Jermaine Jones came on as a substitute in the 3-1 Matchday 2 victory over Maccabi Haifa. AZ Alkmaar, Sporting Lisbon and Schalke 04 all top their groups, and the group leader trend continues at Anderlecht, where Sacha Kljestan will look to start again, having done so in all 13 matches this season, including Anderlecht’s 5-0 thrashing of Standard Liege on Sunday.

Hannover 96 captain Cherundolo, meanwhile, must cope with the ignominy of second place. Although tied with Standard Liege on points, the team cedes first on goal difference. Let’s see some more clean sheets, Steve.

Dominic Cervi, third in line for the goalkeeper spot at Celtic, has yet to feature this season. Perhaps he will at last get a shot to stop the shots. (But be honest. Have you ever heard of him?)

Stay tuned for the continuing exploits of Uncle Sam’s soccer spies overseas. (Seriously. I mean to make a series of this.)

As one last word on Deuce’s iced-out flows, in a freestyle a few years back he had a truly great/awful line in “If I was a dolphin, I would have a platinum fin.” That one really is kind of worth checking out.

Just by plucking names from this group of current and eliminated Europa players, one could field a highly competitive national side. In fact the back 4 and front 2 played the second half against Honduras in the last international break.