A few picks for today, Saturday May 5:

FA Cup Final: Liverpool vs Chelsea (12:15pmET, FSC & Fox Deportes): Two teams that have been underwhelming in the league but surprisingly successful in cup competitions.  Liverpool has already won the League Cup, while this is the 1st of two cup finals Chelsea will be competing for this month.

As outlined in this Telegraph column, these two clubs developed a heated rivalry over the past decade, playing in each other a remarkable 39 number times in the aughts:

One club was a product of its time, the other traversing a long road of redemption towards former glories.

Chelsea had Abramovich’s millions and the charismatic and calculating Jose Mourinho. Liverpool the tactical nous and organisational skills of Rafael Benitez that had been missing under the admittedly exciting stewardships of Gerard Houllier and Roy Evans.

Liverpool had capital-h History. Chelsea were rich upstarts. The pair were never likely to get along.

Their rivalry was ignited by ignited by Luis Garcia’s phantom goal at Anfield in 2005 [pictured above] which sealed qualification for the Champions League final. Jose Mourinho is still whingeing about it.

La Liga, Atlético Madrid vs Málaga (3pmET, ESPN3.com): Málaga sits in the crucial 4th place in the league, which would lead to Champions League qualification.  That is one of primary goals of the ambitious–although so far somewhat rocky—Qatari-funded Málaga project.  They’ve spent a fair amount of petro-euros on transfer fees over the past couple years–most prominently the €19m they spent last summer to lure Spanish international midfielder Santi Cazorla away from Villareal–“the crowning moment in Málaga’s transformation” Sid Lowe wrote at the time.  Other Málaga players who’ve caught our eye: Venezuelan striker Jose Rondón, attack-minded Portuguese fullback Eliseu, and two young attacking players in Argentine Diego Buonanotte and Spaniard Francisco Román Alarcón, aka Isco. The former is a 24-year-old who starred for River Plate as a teenager, before he barely survived in a horrific car crash 3 years ago–see FiveInMidfield’s account.  Isco, who just celebrated his 20th birthday a couple weeks ago, was born in Benalmádena, just outside Málaga, but came up through Valencia’s youth system.  He made just four La Liga appearances for Valencia last season before Málaga paid €6m last summer.

Atlético–who will be travelling to Bucharest this coming week to take on Athletic Bilbao in the Europa League final on Wednesday–still have an outside chance of catching up with Málaga.  Los Colchoneros (“The Mattress Makers“) sit in 6th place, 5 points behind Málaga (with Levante in between in 5th place).  The player to watch on Atlético is without a doubt Colombian striker Falcao, who has ably replaced Kun Aguero. One of Atlético’s challenges this summer will be to keep richer clubs from luring him away after just a year in Madrid.  Falcao also starred for River Plate–he played for the Argentine giants from 2001-2009, including under current Atlético Madrid manager’s Diego Simeone‘s stint as manager there in 2008.

La Liga, Barcelona vs Espanyol (3pmET, ESPN3.com): The Derbi barceloní, and Pep Guardiola’s last match at the Camp Nou. Espanyol held Barcelona to a draw on their ground in January, after which Sid Lowe wrote:

Created as a conscious rejection of Barcelona – not, as is often assumed, of Barça’s Catalanism but of their foreignness, founded by Hans Gamper, who was Swiss, and full of British ex-pats – Espanyol’s identity has shifted over the past century. So, even, has their name. From the consciously Spanish club they became, rejecting the growing identification of Barcelona with Catalanism, to their recent reinvention, staking their own claim to being Catalan, there has been a constant: they don’t like Barça. Just as Barcelona’s narrative evokes their status as a kind of resistance to the state, so now does Espanyol’s – only this time the “state” is the Catalan one. Barcelona is more than a club; so too, as the banner at Cornellá pointedly put it on Sunday night, “is Catalunya”.

We took a look at Espanyol’s youthful talent in a previous what-to-watch feature, here. 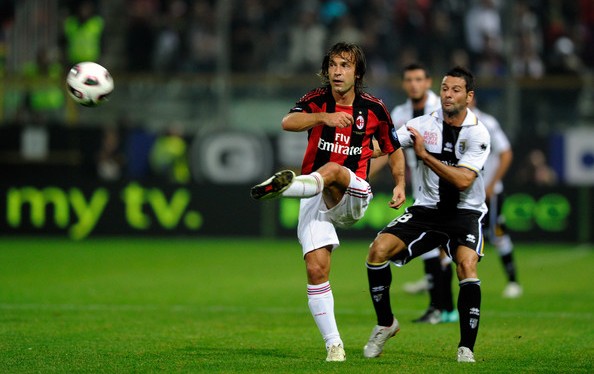 Italy, AC Milan vs. Juventus, 2:30pmET (FSC, ESPN3.com):  Could be the match that decides the Scudetto.  These two are the top of the Serie A table, separated by just a point (although Juve has a game in hand). Can La Vecchia Signora go into San Siro and beat the defending champions? A prominent subplot: this is aging midfielder Andrea Pirlo‘s return to Milan, to play against the club where he spent a decade as the premier deep-lying playmaker in Serie A (and perhaps in the world).

Spain, Espanyol vs. Levante 4pmET (ESPN Deportes, ESPN3.com): Yet another match pivotal in the bunched-up race for 4th place in La Liga.  Espanyol is tied for 4th with Athletic Bilbao (33 points), while Levante (and Atletico Madrid) are just a point behind them. We wrote last weekend about Espanyol’s youthful talent.

England, Arsenal vs. Spurs 8:30amET (FSC): The North London Derby–and for the first time in many years, Spurs are widely acknowledged to have the superior squad, and are favored to win on Arsenal’s home ground.  But Spurs supporter PoliticalFootballs isn’t buying it. An excerpt from his match preview:

I am not so optimistic about Tottenham’s chances, neither for this weekend or the following week’s match against United.  For too long, Spurs have looked good and then collapsed – it seems inevitable that it will happen again this year.  With their 10 point advantage over Arsenal, they have a great opportunity to finish above them for the first time since the 1994/5 season, having never done so since Arsene Wenger became the Gunners’ manager.  Tottenham have also not done the double (beat them home and away) over their neighbours since 1992/3 – and even then, the match at Highbury was against a makeshift team, as the home side were looking ahead to the FA Cup final the following week.

Netherlands, PSV Eindhoven vs. Feyenoord 8:30amET (ESPN Deportes, ESPN3.com): #1 in the Eredivisie table vs #5, separated by only 4 points (with AZ Alkmaar, Heerenveen and Twente in between, and Ajax in 6th a point behind Feyenoord).  Also a chance to see some young Dutch internationals that are still playing in the home country: from PSV defender Erik Pieters and midfielders Georginio Wijnaldum and Kevin Strootman are in the Dutch squad that will be playing England on Wednesday, as is Feyenoord central defender Ron Vlaar.  The one to watch is deep-lying midfielder Strootman, who has been called the future of the Dutch midfield.

Spain, Rayo Vallecano vs. Real Madrid 10amET (ESPN3.com, tape at 5 p.m. on ESPN Deportes): A Madrid derby of sorts–Rayo Vallecano is located in the Vallecas neighborhood of Madrid, where they play at the 15,500-capacity Campo de Futbol de Vallecas. Rayo Vallecano just got back to the first division this season, after spending most of the past decade in Segunda Division and Segunda Division B. But they’re currently just two points off that all-important 4th place, and Sid Lowe cited them as a team that’s worth watching in a recent column:

Look at La Liga now and few teams are exciting; few look genuinely good; fewer still have achieved any sort of consistency. Rayo Vallecano are one (five wins in seven and great to watch), Athletic Bilbao another (they lost three of their first four but just three in 19 since), improving Atlético Madrid perhaps a third. A case can be made for Espanyol. And then?

England Carling Cup, Liverpool vs. Cardiff City 11amET (FSC): Liverpool’s first time back at Wembley since the 1996 FA Cup final (a match that’s remembered more for the Spice Boys’ pre-match white Armani suits than for the match itself).

Italy, Napoli vs. Inter Milan 2:30pmET FSC, ESPN3.com: Another chance to watch perhaps the most exciting and dynamic attack in Europe–Napoli’s front line of Cavani, Lavezzi and Hamsik, supported by Inler and Gargano in the center of the midfield, Zuniga and Maggio on the wings.  (Note that Maggio is the only Italian among those, and note the strong South American contingent: Cavani and Gargano are Uruguayan, while Lavezzi is Argentine.)

Spain, Atletico Madrid vs. Barcelona 3:30pmET (GolTV): Might Barca drop yet more points at the Estadio Vicente Calderón?  Atletico certainly has more to play for, as they’ve climbed back into contention for that last Champions League spot, while Barcelona has practically given up any chance of catching Real Madrid for the La Liga title–due to struggles on the road–and has consequently shifted their focus and energies on the Champions League campaign.  We looked at Atletico’s squad–and their recently installed manager, former Atletico player (and Argentine international) Diego Simeone–in this post a month ago.

There’s a whole slate of FA Cup matches in England, including Sunderland-Arsenal (see PoliticalFootballs’ most recent post for a full list of those fixtures), and domestic matches in Germany, Italy, etc.  But we’re finding ourselves getting increasingly fascinated by Spanish football beyond the big two.

So we’ve picked out a couple matches to focus on this weekend, involving 4 of the 14 teams that have a shot at finishing 4th in La Liga and claiming a Champions League spot for next fall: Getafe-Espanyol (which is actually a Madrid vs Barcelona matchup), and a north vs south battle in Athletic Bilbao-Malaga.
(For a full list of matches televised in the US this weekend see here, or go to livesoccertv.com.)

La Liga, Getafe-Espanyol 12pmET (ESPN Deportes, ESPN3.com): Our continuing quest to go beyond the big two in Spain.  Indeed, these two clubs are severely overshadowed in their hometowns by those big two–Espanyol by their Catalan rivals Barcelona, Getafe by Real (and Atlético) Madrid.  But this season finds both teams in what Sid Lowe has called this season’s “slow bicycle race for La Liga’s final Champions League spot“: Real Madrid, Barcelona, and Valencia are almost sure to finish 1-2-3, and there’s an entire peloton of teams jockeying for 4th place. Espanayol is in 5th place, even with Levante (Valencia’s 2nd team!) at 32 points–but that’s only 5 points more than 12th place Getafe (and 9 points more than 18th place Racing Santander!).  See below for the full La Liga table.

As for players to watch, note that 3 members of Espanyol’s squad makes a Forza Futbol Top 10 list of “Young Foreign Talent Playing in La Liga“:

Note also that the other two members of Espanyol’s strikeforce mentioned above are youngsters as well:  Vladimír Weiss is a 22yo Slovakian on loan from Manchester City, and Álvaro Vázquez is a 20yo Catalan who came up through Espanyol’s youth system (and has appeared for Spain’s U20 and U21 teams).  The squad also contains another young player on loan from Milan: 22yo left back Dídac Vilà, who AC Milan loaned back to Espanyol for this season after Milan purchased him during the January 2011 transfer window.  He’s another Catalan product of Espanyol’s youth system–aside from spending last spring with Milan, he’s been with Espanyol since he was 10 years old.

For more on Espanyol, see this piece, also on Forza Futbol: “A Barcelona Outsider: The Case for RCD Espanyol”

La Liga, Athletic Bilbao-Malaga (10amET, DirecTV): Two more teams involved in that slow bicycle race, separated by just a point in the table.  Malaga travels from the south coast to the moutainous north, to play in the Basque cathedral of football–San Mames.

England FA Cup, Sunderland-Arsenal noon FSC: After Wednesday’s horror show in Milan, Arsenal has to travel up north to take on Sunderland for the 2nd weekend in a row.  They salvaged a come-from-behind victory last weekend courtesy of an extra-time score from Thierry Henry.  But the Frenchman is on his way back to this side of the Atlantic, to rejoin the New York Red Bulls after the MLS team turned down Wenger’s request to extend Henry’s loan.  Will Arsenal pull themselves together after Wednesday?  Or does Arsenal’s implode like last season, but this time in February?