Who knew there’s a full slate of games in the Premier League, Serie A, Ligue 1, Spain (Copa del Rey)? Though to tell the truth, not a whole lot of must-see TV today. Actually the one match today that we will try to watch just kicked off, so this will have to be a very quick post: 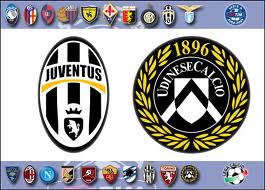 Udinese-Juventus at Stadio Communale Friuli (12pmET, Fox Soccer Channel, RAI Internazionale, ESPN3 USA, FOX Deportes): 3rd vs 2nd – Udinese with 31 points, two behind Juve, who are in turn a point behind table-toppers Milan.  Neither team was really expected to be competing for the Scudetto, but here they are. Udinese had a great season last year, but sold off three of their best players (Alexis Sanchez, Gokhan Inler, and a defender whose name escapes me right now).  They failed to get past Arsenal in Champions League qualifying, but that may have been a blessing in disguise, as they’ve been able to concentrate on the domestic league.

Juventus is perhaps even more surprising–still undefeated in the league (9W 6D 0L).  We finally got to watch Juve play (thanks to the fact we flew cross-country on JetBlue, and so were captive with GolTV for 10 hours), specifically the rather dramatic Coppa Italia match they played against Bologna.  Players to watch on Juve: holding midfielder and Milan transplant Andrea Pirlo,  Claudio Marchisio, Paraguayan Marcelo Estigarribia, ageless trequartista Alessandro del Piero; we also like to see Dutchman Eljero Elia, whose been somewhat lost in the shuffle since coming over from Hamburg in August.

Regarding the English fixtures, go over to PoliticalFootballs and see John’s latest post–“This week in: English Football – Christmas Time is Here“.  The one match today in England that we might try to catch later on is:

Fulham-Manchester United at Craven Cottage (3pmET, Fox Soccer Channel, FOX Deportes): Fulham has had success against MU at home: 2 wins and a draw in the past 3 seasons, according to the honorable Barry Glendenning (“purveyor of ‘lazy journalism’ and ‘anti-[insert name of your favourite team here]’ bias”) on this past Monday’s Guardian Football Weekly pod. Although he doesn’t rate them to repeat that success today.  Raphael Honigstein, on the other hand, said he thinks Fulham could very well earn a point from this match, and cites two players to watch: Costa Rican attacking midfielder Bryan Ruiz, who arrived from FC Twente over the summer, and seems like he’s only now adjusting and fitting in; and Belgian striker Moussa Dembele, who also came over after success in the Eredivisie, with AZ Alkmaar, the previous summer.  We wrote at the time that perhaps Fulham might have to choose between playing him and American Clint Dempsey–but they combined rather well last year, and from what we saw in their draw versus Liverpool a couple weeks ago, Bryan Ruiz is starting to combine well with the two of them.

Bonus reason to watch this match: Dempsey is #3 on the list of jid’s players to watch.