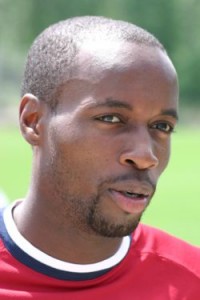 DaMarcus Beasley and the other high-profile American exports miss out on the Mexican league playoffs.

With the number of American soccer players plying their trade south of the border, it’s surprising only three will see time in the Primera Division playoffs. (Americans in the Mexican league will receive deeper analysis and description at a later date, once the off-season transfer dust settles.) Perhaps it sounds harsh, but the extant Americans hardly merit writing home about, though. No Herculez Gomez, no Michael Orozco Fiscal, no Marcus DaBeasley.

Herculez Gomez, on fire of late, suffered a huge loss with Estudiantes Tecos 3-0 to Querétaro away, the team’s third loss in a row. Before the losing streak, Gomez had scored 5 in eight matches. His brace in the first 16 minutes against Santos Laguna in late October may have put him in contention for a recall to the U.S. team, but it couldn’t change the fortunes of his club team. No playoffs.

Iffy U.S. international Orozco Fiscal of San Luis Potosi participated in the trouncing of Toluca 5-1 on Saturday, but too little, too late. No playoffs.

U.S. international DaBeasley, a player rejuvenated by the move to Puebla, out. (See below.) No playoffs.

For those who made the grade, Miguel Ángel Ponce, of Sacramento, CA, connected with the goalscorer with a low cross to notch the first goal in Guadalajara’s 2-2 tie with Pachuca, securing first place. Guadalajara play Querétaro in the quarterfinals.

Tuzos also made the playoffs, and José Francisco Torres will too, assuming he recovers from a broken foot. He’s got some time to heal, but not much. The quarterfinals begin November 16. Truth be told, it’s probably too soon.

Jonathan Bornstein and the Tigres UANL beat Beasley’s Puebla 1-0 on Sunday. Beasley saw yellow. No good. No good at all. Bornstein didn’t even play. In fact, he did not play once during the regular season.

So, realistically, one American has a chance at seeing playing time in the playoffs. Miguel Ángel Ponce, quarterfinal it up for the country, brother. Both countries, rather, as the Mexican-American has chosen the Mexico national team over the U.S. squad.

In any case, commiserations on the regrettable last name, Ponce.

Previous PostWhat to Watch This Weekend: Athletic Bilbao-Barcelona, Guardiola Visits Bielsa
Next PostReady, Set, Rev Up and Get Intergalactic Dyno-mite