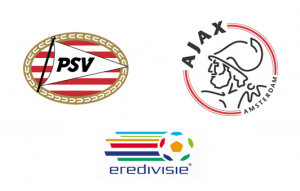 Belatedly posting our guide to today’s matches to watch. In fact, the first match is already in progress–it’s 1-1 at halftime in Eindhoven, where PSV is hosting Ajax:

Netherlands, PSV-Ajax 6:30aET (ESPN Deportes, ESPN3.com): We said it last year, and we’ll say it again: if you’re only going to watch one Eredivisie match all year, might as well be this one.  A surprising fact that kicks off the excellent The Swiss Ramble’s (“Usually writes about the business of football”) excellent essay about Ajax (“Why Ajax are no longer Dutch masters”): “Ajax’s star has been on the wane for many years. The cold, hard facts are that they have only won the Eredivisie twice in the last 12 years, the most recent occasion being way back in the 2003/04 season, while PSV Eindhoven have won the league seven times in the same period.”

England, Manchester United-Chelsea 11aET (Fox Soccer, Fox Deportes; tape at 5 on Fox main network): The big one in England this weekend. Read our Spurs man on this match, on his recently-launched Political Footballs blog.