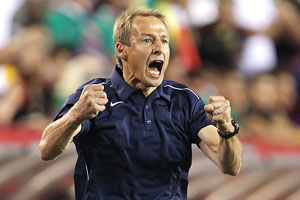 Some quick thoughts on Klinsmann’s debut as USMNT coach Wednesday night, against Mexico in Philly:

1) I liked how the jerseys were stripped of names, and numbers were somewhat “randomly” assigned. The message is something I loved doing when I coached: every spot is up for grabs, no one is assured anything.

2) Jurgen is channeling some Pia. His comments at half time with Rob Stone, and post match, all focused on the positive. One of the things that came out about Pia during WWC2011 was her philosophy of 80/20 positive/negative. Seems Jurgen, at least initially, is taking that tact. Whether that stays, who knows. I never saw a Bob Bradley halftime speech, but I suspect it was FAR less than 80/20 positive.

3) DON’T get too excited about that 2nd half. No Rafa Marquez made a HUGE difference on the Mexican defensive organization. Clearly they need to find a successor to him between now and 2014, but I was quite surprised by how much his substitution hurt. Similarly, Sinha’s absence was noticeable, as noted on air Gio Dos Santos plays only one speed (fast) and one direction (forward). Being unable to slow down the game when the tide turned in favor of the US and hurt Mexico. And Sinha is 35, so I doubt he will make WC2014 (and maybe not even the Confed Cup). That replacement is going to be as key as Marquez. And of course, there was no Chicharrito.

3) Torres and Landon need to be central–they were much more effective centrally, even accounting for what I said above. We’ve seen this time and again not only with Landon, but Clint Dempsey. I suspect that Jurgen will give Landon and Clint more latitude (and NOT isolate them on the flanks) as Bradley did, but that will clearly depend on situational/tactical needs. IF Torres finds a home on the USMNT, it will be central not on the wing which leads to…..

4) We’ve got LOTS of central MF players–aside from those we saw last night (Beckerman, Bradley, Rogers, Jones, Shea, Clark, Torres, Donovan), include Edu, Clint (at times), and soon Stewart Holden (a personal favorite). How Jurgen maximizes this talent will be interesting. Jones probably played himself out (at least in my eyes) and I’m not sure I would pick Edu over some of the younger guys, and Ricardo Clark seems to be enigmatic.

5) We can’t play the solo striker. Look, Buddle, Aguadelo, Altidore, Davies, these are forwards in the US pool. They need partners. In part this is due to the fact that most US club, school, etc squads play with 2. If not playing a 4-4-2, if you’re going to play a 4-5-1 (and just on a personal note, the lineup was shown on telecast with 4-2-3-1, but COME ON, it’s 5 MF, with two holding why do we have to fancy it up?) the 1 or 2 attacking mids REALLY have to play close to the lone striker to get good combo play. Brian McBride ain’t walking back on the pitch anytime soon, and he was the best target forward ever in the US (and among the best globally in his prime–that’s a nod to Jon Novy), so MAYBE we shouldn’t try and force our forwards to play that way.

6) The search for a new back line continues. By far, last night it was the “old men” that shone–Bocanegra and Cherundolo. Orozco Fiscal and Castillo didn’t do it for me. That might just be because it’s early, but I’m not sold on either. And mind you, this was a Mexican squad without Chicharito. The Costa Rica and Belgium friendlies will hopefully shed some more light on that situation.