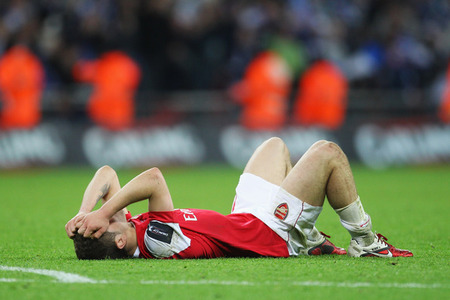 Arsenal caught a serious case of the Blues on Sunday, for sure.

I wasn’t terribly surprised by the 2-1 defeat to the old boys from the second city in the Carling Cup final. Birmingham can hold down the fort when they need to. The defense is often well-organized, stubborn, and capable of scoring on set pieces; the midfield is scrappy and confident; the forward line, while less than imaginative, can obviously take advantage of the odd bounce of the ball.

I’m not the first, nor the last, to praise Blues’ keeper Ben Foster. He was everywhere and anywhere on Sunday, playing as if it were his last match on earth. Quite a superb solo effort by England’s future number two!

As for the Gunners: With Cesc and Walcott nursing minor injuries, I had hoped against hope that Rosicky would remain on the bench, that Nasri would move to the attacking, central midfield role, and (gasp?) that Bendter would start on the right wing. Alas, it was as I predicted: Rosicky in the middle, Nasri on the right…

Despite Rosicky’s lack of ambition, and Van Persie’s yet-to-be disclosed injury–which forced him to exit the match prematurely–the loss nestled itself quite comfortably on the shoulders  of Arsenal’s goalkeeper and left-center back. (I can’t even mention them by name. Not that I’m ashamed, I just don’t have the energy to look up Eastern-European vowel and consonant combinations…)

I can’t help but wonder if Arsene Wenger might share a bit of the blame for Sunday’s loss. For three years, Gooners have clamored for solid, experienced, goalkeepers and center halves/backs. The signing of Vermaelen was a wonderstroke, but a niggling, mysterious, Achilles injury has rendered him unavailable until hell freezes over. William Gallas was a delicate genius, but now he cries for the Spurs. Sol Campbell had a brief spell of nostalgic leadership for the Gunners late last year, but now he warms the cheap seats at St. James’ Park.

Cech/Terry, van der Sar/Vidic, Howard/Distin, Schwarzer/Hangeland, Foster/Johnson… none of them would have allowed the grade-school defensive incommunicado that led to Birmingham’s late game-winner against Arsenal. (Even Reina/Carragher/Skrtl/Agger wouldn’t have… okay, they might have… no offense to Liverpool, but times are tough these days, eh?)

Amongst his many talents, Wenger is known for his studious scouting of cheap French talent. The Gunners have two experienced lightning rods on the defensive wings who hail from just across the channel. But the fact that Sagna and Clichy speak French doesn’t mean that the central defenders must share the same language. French-speakers Djourou (Swiss-African = French-speaking?), Squillaci, and Koscielny… none of them are top-tier central defenders, but it doesn’t take a linguistics major to form a relationship with one’s goalkeeper, to understand the words “Keeper!” or “Mine!”. (On the other hand, my dear Koscielny, descendant of the Koscielnys who break up Barca’s play so nicely, “WHEN IN DOUBT, KICK IT OUT!!!”)

Another of Wenger’s talents: Stubbornness. Arsene, you might have had Hangeland, Schwarzer, Shay Given, Gary Cahill…

Your loss? Our loss?

Will Sunday’s loss deter and detour Arsenal’s trophy aspirations? I think not. Arsenal are young, hopeful, and full of piss and vinegar. Roman Abramovich’s “No Country For Old Men” squad might have become disgruntled after a loss like Sunday’s. Rooney, Fletcher and Rafael might have thrown tempter tantrums. But the current Gunners squad (save for Cesc) is much less entitled. These Young Guns aren’t accustomed to immediate trophies, and they have taken in only the slightest whiff of success. I predict that they will fight, tooth and nail, until they achieve it.