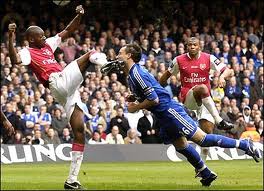 The one match of the day is the match of the week–Chelsea goes crosstown to take on Arsenal at the Emirates. Kickoff is at 8pm in London (3pm ET; watch it on ESPN2, ESPN Deportes, or ESPN3.com in the US).

Here are a handful of links to get you ready for the big match:

–We find it’s very useful to have the Current Squad lists in front of us, for #s, nationalities, and links to individual player bios: Chelsea & Arsenal.

–Prior to the Chelsea-Arsenal match in early October, we posted a look at the players of African origin on each squad.

–Here is Goal.com’s match preview, which also has links to lineups and match stats (updated once the match is underway).

–Here is ESPNSoccerNet’s match preview, which predictably lists Samir Nasri and Didier Drogba as the players to watch (Nasri perhaps having replaced the too-oft-injured Fabregas as Arsenal’s talisman), and lists the following as the key match-up:

Key Battle: Bacary Sagna v Ashley Cole. One of the Premier League’s finest right-backs, Sagna’s strength and pace create an excellent outlet and his defensive nous is of great importance given the sometimes shaky nature of the Arsenal defence. On the right side, he bombs forward and possesses a decent final delivery, but he will be required to track back to counter the threat of Cole. The former Arsenal left-back certainly knows a thing or two about his old team, but Sagna poses a different challenge, having joined the club a year after Cole left for Chelsea. Both are full of running and attacking ambition, but it will be how they deal with their defensive duties that settles this battle.