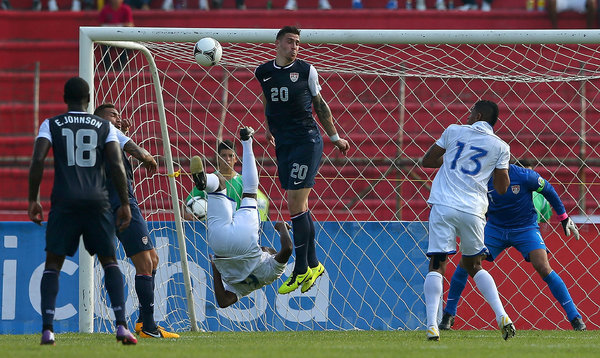 The highly anticipated (at least in this quadrasphere (?)) CONCACAF Hex started yesterday, with three very compelling matches: the USMNT went down to Honduras and lost 2-1, Costa Rica battled back for a 2-2 draw in Panama City, and perhaps most surprisingly Jamaica left the usually forboding Estadio Azteca with a point after battling Mexico to a scoreless draw.

(Each of the 10 matchdays between Wednesday and October 15 will consist of three matches featuring the six teams in the Hex, for a full home-and-away round robin among the squads. Actually that’s not quite true–for some reason Jamaica-Mexico’s return fixture in Kingston is scheduled on its own on June 4, and there are only two matches on June 18. See here for the full schedule.)

We asked our team of correspondents to send in their thoughts on the matches.

Worse it’s Ray Hudson. And it’s like they never tested for sound levels.

Some nice one touch from each side, but USA definitely sitting back. Pitch very slow. Tempo very slow.

First real chance at 28th minute, quick counter from the US. Michael Bradley collected a Cameron header at top of box, dribbled away from pressure, laid into Clint(u) Dempsey in circle, couple dribbles toward right side, dropped off to Jermaine Jones (?) who one-touch passes through to Eddie Johnson. Cross just tipped over by Jozy Altidore’s reaching foot.

USA back line keeps presenting Honduras with opportunities from their general nervousness and ragged-iness.

Jones through ball chip for Dempsey to volley across into far post: 1-0 for USA in 35′.  Good presence from Bradley and Jones in the transition. Final two touches reminiscent of Alex Song to RVP last season for Arsenal.

And that bicycle kick [by Juan Carlos Garcia in 40′] doesn’t need any explanation, except USA couldn’t clear a corner and gave the corner away unnecessarily.

USA switches to two up front. Match played in bursts as neither team seems happy with weather conditions.

USA surrenders possession easily again, but two just barely offsides despite continued ragged-iness keeps Honduras off board. Kljestan and Edu come on to try and solve that possession issue.

Honestly like a couple of times there has been quality one and two touch moves from the US.

And then USA back line and their problems finally gives Honduras their second [via Oscar Boniek García, of the MLS’ Houston Dynamo]. Cameron beaten on speed to a through ball and Gonzalez did not cover at all, actually looking to see if a player was nearby.

Disappointing, but really what is gonna happen paying that back line in the first road match in the Hex?

Sorry Jurgen, but that was a starting XI that should have been tried out in a friendly, not the first round of the hexagonal! Benching Bocanegra??? The back 4 were saved several times by offsides and mis-hit final passes. And the final third is still as much a disaster as ever, but that group of MF sure didn’t help, with 3 guys that are holding MF. And I just don’t think Dempsey pairs well with Johnson–Gomez or even Altidore is a better match.

Better step it up Jurgen, b/c El Tri is going to really spank you if the squad continues to play like this!

and a followup clarification:

I’m not disrespecting the Hondurans at all, I thought the US would get a tie, and I think they are a bit better than “horrible” much less “not deserve” to be in the hexagonal. Mexico is clearly the class of CONCACAF. And while Bocanegra is OLD, his experience in organizing the back line and coordinating with the holding midfielder(s) would have been extremely helpful in this setting–precisely BECAUSE the Hondurans are strong in the attack particularly in their home park. Moreover, Klinsmann “claimed” he was going to install an aggressive, attacking style, but that starting XI seemed to be the opposite of that with 3 holding MF’s essentially and then Dempsey and Johnson up top–it looked to me to be playing for the draw.

Larry follows up on Simon’s comments regarding Klinsmann’s starting XI:

Simon, don’t forget about Altidore in the starting lineup. However, clearly, Klinsmann saw he had erred, cause he brought on experienced, control players in Edu and Kljestan right after the Hondurans had a goal disallowed. Sure they were offsides, but the horrendous loss of possession that led to it was the problem. There were a couple of moments of the football everyone likes to see, but Simon is right, opening match, on road is not the time for the a back line with 10 caps between the four. Plus the center backs had never played with each other. Plus Cameron doesn’t even play there for Stoke, nor does Stoke even play the style Klinsmann wants from the US.

Tommy chimed in with some colorful commentary:

Where is our Forlan, Suarez, or Chicharito (I won’t even dream of a Messi, Rohaldhino, or Ronaldo)? Probably playing in the NBA or NFL. Donovan has been a class player, Dempsey serviceable, but until the US finally has someone that can own a match verytime they step on the field, they’ll be playing for scraps.

That came after some even more colorful commentary:

Ima pull a Denny Green here about Mexico, “If you want to crown them, then crown their ass!” The Mexican side I watched suck out a tie with a physical but not terribly skilled Jamaican squad doesn’t instill much fear in me away from Azteca. Could have easily been a 2-0 game w the Boyz taking the 3 pts. Defense was spotty during its best run, more often was pukey. Offense had zero flow and looked disinterested outside of a couple decent through balls into the box. Midfield was disconnected, unorganized, and listless. But things will get sorted out and settled down by October, w US, Mexico, and Honduras or Costa Rica taking the top 3 spots.

Also worth listening to is Beyond the Pitch’s podcast on “The Honduran Standoff“.  But we’re looking forward to seeing if the USMNT and Klinsmann can sort stuff out for the next Hex Matchday–Friday, March 22, when the US hosts a talented Costa Rica side in Colorado. In fact, our Rocky Mountain High man Tyler will be at that match, and the NYC CultFootball crew plan to get together to watch that together, so look for extended coverage from us next month.

Video highlights of completed matches below.

Spain just kicked off against Honduras–and so begins the highly anticipated return of Spain to the field of play after their shocking loss to Switzerland last week.

Commentary after the jump…