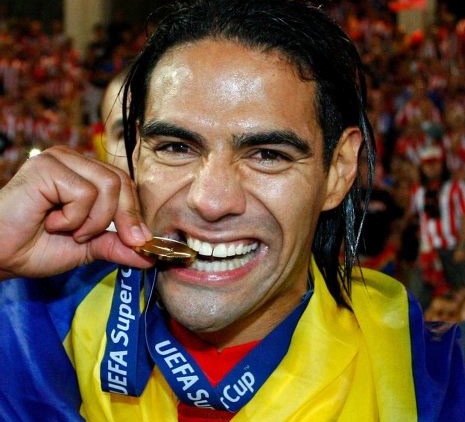 The weekend began Friday afternoon (for those of us on this side of the Atlantic–it was Friday night in France, where the match was played) with the UEFA Supercup between Chelsea and Atletico Madrid.

By the time we tuned in to check the score, it was halftime, and the score already 3-0–via a hat-trick for exactly who you would think would be lighting it up.  His 2nd hattrick in five days, given that he scored three against Athletic Bilbao in Madrid on Monday! The Colombian kid is making a case for being one of the best few strikers in the game right now. Here are the goals, each of them spectacular. Commentary pulled from the Guardian MBM:

6 min: GOAL! Chelsea 0-1 Atlético Madrid. Chelsea are rocking alright. Chelsea’s back line is ripped apart by a simple pass down the middle. Falcao romps after it, picking up possession down the inside-left channel. He takes one step into the area, steadies himself, draws Cech, and dinks an exquisite chip towards the right-hand post. The ball hits the woodwork, and spins into the net, beyond the despairing tootsies of Luiz, who is sliding in at speed. What an amazing finish. Upfield, former charge Fernando Torres looks on in stunned disbelief.

19 min: GOAL! Chelsea 0-2 Atlético Madrid. This is such a superlative finish by Falcao. There’s a burst up the Atlético inside-right channel. Luiz can’t stop the ball flying to Falcao’s feet, just outside the area, though he probably should have cut it out. Falcao pauses for the ball to roll out from under his studs, nudges it to the left, taking Cole out of the picture, opens his body, and guides a beautiful effort into the top-left corner. Cech had no chance whatsoever, that was sailing serenely into the net from the nanosecond it left Falcao’s boot. This, ladies and gentlemen, is football.

44 min: GOAL!!! AND A SECOND HAT-TRICK THIS WEEK FOR FALCAO! Chelsea 0-3 Atlético Madrid A corner for Chelsea, won down the left by Mata. So what happens? You know what happens. Atlético clear, then stream upfield, down the right. Arda Turan is allowed to run at the area, and run, and run, and run, and run. He eventually rolls the ball out left to Falcao, who takes one touch and smashes the ball past Cech. In no way can it be argued that this hasn’t been coming.

Unfortunately neither the gif not the Guardian mbm gives credit to the superlative pass (from Gabi?) that put Falcao through for the first goal.  At least the Turkish Arda Turan gets credit for his nice square assist on the 3rd. Worth a mention besides those two is their fellow midfielder Adrián. Watch it in the video highlights:

The gifs above were pulled from afootballreport’s “Transfer Deadline Day, according to Falcao*” report, which also provides some entertaining text:

As clubs around Europe neurotically began a 24 hour spurt of panic-buying, Falcao led Atlético Madrid to a 4-1 rout against Chelsea and could only shake his head and laugh at the millions of pounds and euros being thrown around. He also laughed at David Luiz, because David Luiz is hilarious and spent the night doing Macaulay Culkin impressions instead of defending. Then he laughed at Branislav Ivanovic, because despite Branislav’s admirable career he would likely never spend a night with a Colombian woman. Finally, his eyes met Roman Abramovich’s afterEl Tigre completed his hat-trick in the European Super Cup, piercing any remnants of the oil oligarch’s soul. Roman grew unsettled in his luxury box in Monaco.

Don’t let anyone persuade you to think otherwise, casually scoring hat-tricks against the European Champions and smashing the hopes and dreams of oligarchs is the only way to live on transfer deadline day.

If/when we get a chance, we’ll be back with a wrapup of the rest of our weekend viewing–Arsenal breaking their duck at Anfield, RVP powering Utd, and Zeemanlandia at the San Siro.