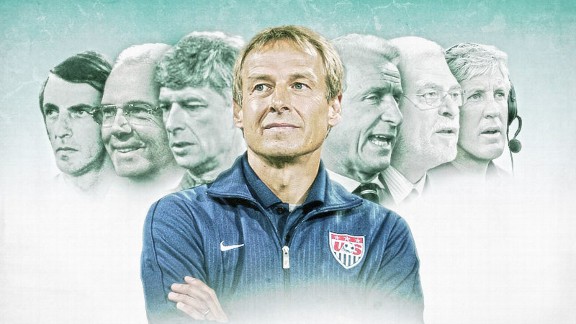 [Extreme conditioning, cribbed from 1950s Communist Hungary? After last night’s 2-1 victory over Ghana in the coastal heat of Natal, that’s the ideal method for Klinsmann and the U.S. team as they stare down the barrel of the Ruffhouse in Manaus, heart of the Amazon, against Cristiano Ronaldo and Portugal. Enjoy the Cult Football at Large article here in excerpt or over at Vocativ.com.]

It’s no secret that the U.S. Men’s National Team is not a favorite going into the World Cup in Brazil. The media has panned the team’s chances, pointing to its unfavorable inclusion in Group G—what some call the Group of Death, with some justification. The U.S. faces three big opponents in the group: Ghana in Natal on June 16, Portugal in Manaus on June 22 and Germany in Recife on June 26. Ghana has knocked the U.S. out of two straight World Cups. Portugal boasts Cristiano Ronaldo—probably the best player in the world—and always shows up in big tournaments (semifinalists at the 2006 World Cup, and the 2008 and 2012 Euro Championships). And Germany reached the World Cup finals in 2002, and the semis 2006 and 2010.

What’s more, America will endure a travel itinerary of almost 9,000 miles between the three group stage matches, kicking off in the far northeast of the country, the heart of the rainforest, then back to the far northeast of the country. None of their games take place near base camp in São Paolo (where the team will return after each match), and all of them hug the most extreme equatorial heat and humidity zones of Brazil.

For the USMNT, there are a lot of factors they couldn’t control: group selection, World Cup layout, the humidity of the Amazon. But prepping for climate extremes, now there’s something that could have been addressed in training.

Way back in January, USMNT head coach Jürgen Klinsmann organized a two-week training camp (of mainly Major League Soccer players) in air-conditioned, five-star facilities in São Paolo. The May training camp was in Stanford, California—hardly known for oppressive conditions. The team then played friendlies in California and New Jersey before confronting some actual humidity in Jacksonville, Florida, against Nigeria (Ghana’s neighbor and stylistic analogue) and winning 2-1.

If he really wanted to prepare his players, Klinsmann should have sent them to the Amazon, confiscated their passports and stranded them in the 80 percent humidity of the rainforest. To acclimatize, players need to swelter for long stretches, training in the muggiest midday heat available, rather than being strapped to electrodes in climate-controlled sports laboratories. Live in huts, not hotels. Yoga, but Bikram. Pull on the humidity like a second skin. The World Cup commences and the players leap through the gate as if on endorphin rushes, ripping through defenses at top speed.

So now what the U.S. needs is an alternate plan—and preferably an out-of-nowhere checkmate. Klinsmann could steer the USMNT out of its hellish World Cup group in Brazil and into the knockout stages, provided he gets dictatorial at the helm. He just needs to incorporate some Cold War Communist management tactics and perhaps jam some treadmills into the sauna.

Jürgen Klinsmann had a clinical soccer pedigree. He won German footballer of the year in 1988 and set controls for world domination. He won the World Cup with West Germany in 1990, the 1996 European Championships with unified Germany and two UEFA (Union of European Football Association) Cups—one with Internazionale and one with Bayern Munich. As a player, he barked orders like any authoritative striker, and his stats gave him automatic street cred.

As a manager, Klinsmann led Germany to the semifinals of the 2006 World Cup, and later managed Bayern Munich, only to fall out with the board. His “führer factor” had come under question due to his relentless optimism, yoga advocacy and his residency in Southern California. People sometimes doubted the tanned man in après-ski casual could be the cold-blooded dictator fans expect in a coach.

But when you don’t have superior force (as is the case with his current U.S. squad) psychological warfare and conditioning are your two best hopes. The horse has bolted on conditioning, but regarding mind games and subterfuge, Klinsmann may yet have some chops. Klinsmann goosed Cristiano Ronaldo a good half-year ahead of the World Cup in the FIFA Ballon d’Or voting. When ballot choices became public, people saw that Klinsmann had not only left Ronaldo off his list, but he also nominated his nemeses: Franck Ribery, who deprived Ronaldo of the UEFA player of the year award; the “New Ronaldo,” Gareth Bale—Real Madrid teammate and therefore enemy within; and Radamel Falcao from the smaller club in Madrid that knocked Real out of last year’s Copa del Rey, and handed the team its first city derby loss in 14 years.

The devious placement of the World Cup qualifying match versus Costa Rica in high elevation Colorado in March 2013—and the ensuing snowpocalypse against the group rival in zero-visibility blizzard—was another example, and showed some promising diabolical tendencies. Finding a way to present Ronaldo with a mirror palace built in the jungle would prove an even bigger coup; like Narcissus trapped by the beauty of his image, Ronaldo might miss training sessions or group stage matches entirely.

But yet, Klinsmann brought 26 American players to Brazil in January and let them all leave. That was his biggest mistake. Jürgen should have embraced his inner Iron Curtain coach; in particular, his inner Gusztáv Sebes. By cribbing from the 1953 Hungarian Golden Team’s shocking 6-3 victory at fortress Wembley, and the autocratic advance measures Sebes took in adaptation prep, Klinsmann could have concocted a modern-day heat-tolerance strategy to get America into the knockouts.

Back in newly nationalized 1949 Hungary, the Ministry of Defense appropriated the Budapest-area Honvéd team as the army team, whereupon Sebes, as deputy minister of sport, installed himself as coach, appropriated the team for international competition purposes and started conscripting the best players in the country to Honvéd. Conveniently, the club already possessed the deadly left foot of star player Ferenc Puskás, who went on to score 83 goals in 84 games for Hungary (357 in 354 games for Honvéd).

Honvéd doubled as club side and national team, winning the league title five times between 1949 and 1955. It shared trophies with MTK Budapest, the secret service team, because even a ranking deputy minister doesn’t provoke the secret police unnecessarily. MTK also held the final key players for when the operation went full Voltron into the aggregate entity, the Aranycsapat (the Golden Team).

Emerging from the darkest days of Stalinist repression, the Golden Team (also known as the Magical Magyars) fused full-court pressure with fluid interchangeability of roles, a precursor to 1970s Dutch total football. Sebes subjected his national team to a full-time fitness and dietary regimen to ensure their conditioning would deliver high tempo for the full 90 minutes—they were Communist soldiers, after all. (The English media called Puskás, in actuality a lieutenant colonel, the “Galloping Major.”) Sebes focused on technique across the board, so players could change position seamlessly, scoring at will.

After the Golden Team won the Olympics in 1952, England, which historically held up its nose at foreign opposition—having codified the rules 90 years previous, cementing their superiority—deigned to invite the actual world No. 1 team to play at the vaunted Empire Stadium at Wembley. England had never lost to continental opposition at home, and a wet late-November day would offer classic English home turf conditions. England needed a boost. After having declined part in any of the first three World Cups, they got dumped out of their first, the 1950 World Cup, in a stunning 1-0 loss to the lowly U.S. team, which did not qualify for another for 40 years.

Here’s where Klinsmann could have learned a thing or two. As if marshaling forces for something outlandish (you know, like a match in a rainforest), Sebes prepared for the 1953 match against England by importing every aspect of English football to Budapest. He resized a training pitch to the exact oversized dimensions of the Wembley field. He considered the different-style English leather ball that got waterlogged as the game went on; especially with the all-English conditions of a cold, wet November day, it would take on weight quickly. Sebes obtained some English soccer balls and instituted training with them on the replica pitch immediately. He also compelled opposition players in the league to play in an “English style,” in order that the team get used to the different formation the British employed.

Sebes tested the English ball as the match ball in a slightly concerning 2-2 draw with Sweden 10 days before the so-called Match of the Century. A final calibration of shot settings with the gradually heavier ball, in a 18-0 blowout against a patsy Renault factory worker side in France, got Hungary fully acclimated. And on the day at Wembley, Hungary scored within the first minute and destroyed England 6-3. Six months later at the return fixture in Budapest, Hungary inflicted an even more brutal 7-1.

Famously, no Communist nation has ever won the World Cup. Hungary won the Olympics in 1952 and dominated the 1954 World Cup tournament, including a group stage 8-3 rout of West Germany, until suffering a crushing loss to those same Germans 2-1 in the final. (But, somehow, not the same Germans–a totally different lineup, as if the Germans had initially played possum.)

Although Hungary’s Golden Team scored a World Cup record 27 goals in the tournament, logged the famous 6-3 and 7-1 victories over England and went 31 straight games unbeaten between 1950 and 1956, they lost that crucial match in 1954. They’re called the best team to never win a World Cup, though the Dutch team of the 70s also has a claim on that title. In 1956, the Soviets invaded to crush an uprising against Communist rule, and Puskás and several others defected while Honvéd toured South America on exhibition. After that, the national team slowly disintegrated.

Imagine Jürgen had stationed his players in Manaus ever since that January training camp, and all the clubs, agents, sponsors and litigators had miraculously allowed this to happen. Not in plush São Paulo, but in maximum acclimation Manaus—capital of the rainforest. The players willingly submitted to six months straight of Amazonian boot camp, with full focus on their Arena da Amazônia showdown with Portugal, the Ruffhouse in Manaus. Jaunts to the marginally less oppressive coastal Natal and Recife would have seemed like destination vacations. While Cristiano banged in all the goals in Spain and the Champions League, posed in various stages of nudity for magazine covers and photo spreads, and opened a museum about himself in his own honor, U.S. players would have explored new realms of heat exhaustion and emerged reformed, rebuilt and steeled for heat-tolerance in the group stage and beyond.  …

Full article: The Communist Guide to Winning at Soccer  at Vocativ.com