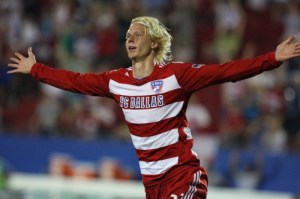 Brek Shea’s season may have ended when the New York Red Bulls knocked FC Dallas out of playoff contention last week, but the 6’3” winger will spend a month training with Arsenal after the upcoming international friendlies in France and Slovenia (November 11 and 15). The Texas native has been linked with a move to Europe and has publically stated he would like to ply his trade in Europe one day. If he impresses, perhaps Arsenal will make an offer Dallas cannot refuse.

According to Dallas FC, “The decision to send Shea to train with the Gunners was made after USA head coach Jurgen Klinsmann encouraged his MLS-based players to spend the off-season training overseas to enter January camp in top shape.”

Without a doubt, Dallas does not want to lose Shea. He still has three years on his contract. But the MLS season doesn’t start up again until March. Perhaps a loan deal could be in the cards.

Wenger mooted the idea that Shea may play a game with the Arsenal reserves, if possible.

Wenger told ArsenalTV: “(He’ll) practice with the top team when it’s possible, practice with the best prospects of the club as well outside the normal sessions and have a contact with top level football in the world and there’s no better place than the Premier League to do it.”